The hot start continues for the Men’s Basketball team, after a 77-70 victory over Omaha Tuesday night pushed their win streak to six games. The Mavericks proved to be no match for the Gauchos, who at seven victories on the year already have more than they had all of last season.

UCSB now sits atop the Big West standings at 7-2 while Nebraska-Omaha continues to be winless on the road and now are stuck at 1-9.

There was definitely a shift in offensive game-plan to start off for the Gauchos, who jumped out to a 20-8 lead halfway through the half.

“Getting to the rim was huge”, forward Leland King II explained after the game. “We started off shooting a lot of threes but they weren’t going in, so we had to find other ways to score. Scoring inside was the only way that was working”.

King played a significant role in sparking a double digit run in the first half and remained a constant source of energy throughout the game, scoring 22 points and collecting 13 rebounds for his fourth straight double-double.

The UCSB lead didn’t last too long, however, as energized by guard KJ Robinson, the Mavericks went on a 22-9 run over the final 11:45 to close out the half actually leading the Gauchos 30-29.

Robinson knocked down back to back threes at one point and ended up scoring 10 points in the half and completely shifting the momentum of the game going into halftime.

Coach Pasternack clarified postgame that while UCSB had to make a few adjustments at halftime, the most important thing was to continue to play hard and take high percentage shots.

“We knew that the percentages were going to even out,” Pasternack noted. “If we kept doing our job on the defensive end, the offense would come to us”.

The spark on offense was none other than sophomore Max Heidegger, who is currently the nation’s seventh leading scorer at 23.9 points per game.

The guard ignited for 21 points in the second half, going 6/7 from the field and 3 for 4 from the three point line. He played a big role in the 15 point lead that the Gauchos amassed near the end of the game, but had to fight through some early struggles on the scoring end.

“I started off really bad on offense,” he admitted. “I was shooting too much, but Coach said to keep going and attacking inside.”

Heidegger is a great scorer because although he is a shooting threat, he also is an explosive finisher at the rim, and this game showcased how his versatility allows him to start off slow and still have a dominant offensive performance. 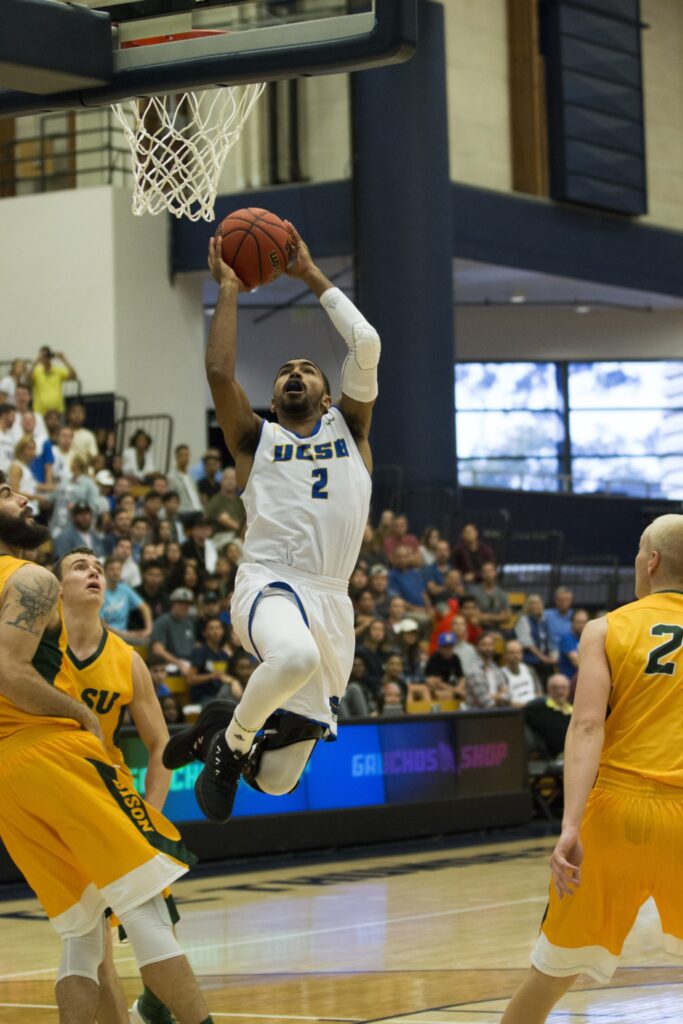 Coming back after a torn left ACL, Gabe Vincent jumps for the hoop. Stephen Manga/Daily Nexus

Another big contributor down the stretch for UCSB was forward Jalen Canty. The Oakland native was a beast down low, nabbing 11 rebounds to go with his 14 points.

Canty and King II both laughed postgame about how they were waiting to get double doubles in the same game, but if they continue to produce at this level then the Gaucho frontcourt will be no joke.

Looking ahead, UCSB heads out to Bozeman, Montana to take on Montana State Saturday afternoon. The Bobcats come into this game led by guard Tyler Hall. The junior is averaging 21.6 points per game, and will be one of the biggest scoring threats the Gauchos have faced so far.

The rest of the line-up isn’t as imposing offensively, so it will be key for UCSB to take Hall out of his comfort zone. The Gauchos will be out of their comfort zone playing out of state, where they have not yet picked up a win this year.

They will have to fight through the chilly Montana weather to claim their first win out of California, but if they remain true to their identity as a defensive team then they should have a great chance to keep the six game win streak alive.

UCSB will take on Montana State at 1 p.m. pacific time on Saturday, December 9 at the Worthington Arena.