The Daily Nexus
Volleyball
Ruddins’s Rise to the Top; Gauchos’ Star Overcomes Setbacks
December 7, 2017 at 5:11 am by Spencer Ault 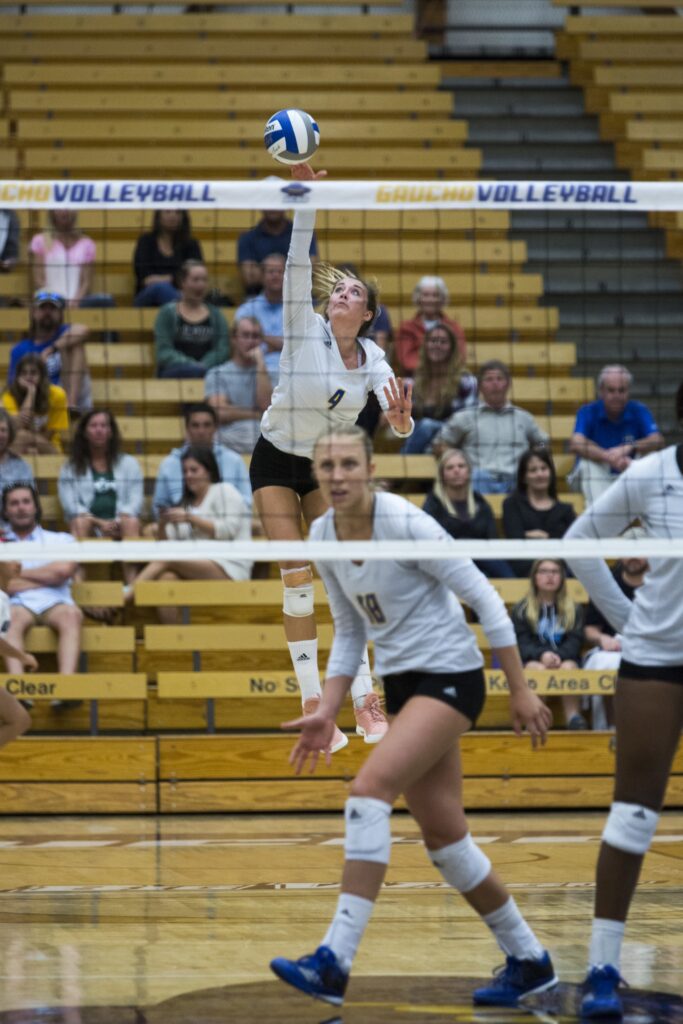 There are hundreds, maybe thousands of Division I women’s volleyball players. Not a single one of them was as good of an attacker as Lindsey Ruddins this season.

Ruddins, UCSB’s star outside hitter, cemented her status as the nation’s top attacker with a 5.84 kills-per-set average in 2017.

That was the best rate in the country, a heady distinction for someone in just her second year of collegiate play.

The road to that premier status was not a smooth one — painful would be a better word to describe it.

In her three years on campus, Ruddins has dealt with two major injuries. She’s also had to deal with three difficult years for the team, which has never finished higher than fourth place in her time with UCSB’s program.

But Ruddins hasn’t faltered, despite the injuries and the losses. Instead, she has excelled, and she is as optimistic as she’s ever been going into next season.

Given what she’s gone through as a UCSB athlete, such optimism is surprising. Ruddins lost almost all of her true freshman year to an abdominal injury, which forced her to medically redshirt the majority of the season.

“I had previously torn my [abdominal] in my senior year of high school,” she said. “I played on it for a little and then it strained again and it was continuously bothering me. It was definitely hard, and we had lots of meetings about it, but I’m happy with my choice to take the year to recover.”

That year off turned out to be a blessing for Ruddins and for the UCSB team. The outside hitter used her recovery time to acclimate to the college game and get ready for her return.

“The college game is so different than high school and club,” Ruddins said. “Being able to get a full year under my belt of just knowing the schedule and having to watch video and do scouting for the first time and stuff like that, it kind of gave me an upper hand as a freshman in my sophomore year.”

Ruddins didn’t let the knowledge she soaked up while off the court go to waste, as she took the nation by storm her first full year on the court as a redshirt freshman.

Her 4.09 kills were tops on the team and the fourth best of any freshman in the country in 2016, and she recorded a team-high eight double-doubles (kills and digs).

Her end-of-season awards list was lengthy, with the Big West Freshman of the Year award and a spot on the AVCA All-American Honorable Mention list serving as the highlights.

That season was also UCSB’s best, as it went 13-3 in Big West play in 2013 to earn a spot in the NCAA Tournament. The Gauchos went 17-12 overall and 8-8 in the Big West, finishing in fourth place in the conference.

Ruddins had overcome a major obstacle and established herself as a rising star. Then, injuries reared their ugly head once again.

During a practice in mid-September of her redshirt freshman season, Ruddins came down hard on a teammate’s foot and rolled her ankle. She only missed two matches that season as a result but underwent reconstructive ankle surgery in the offseason.

That made for two major injuries for Ruddins in only two seasons, a terrible enough ratio to raise serious doubts toward her returning to the court. Ruddins, however, was ready to recover and rally once again.

“I’ve suffered through many injuries in my career, unfortunately,” Ruddins said. “Coming back from that is always tough, but I love volleyball and I feel like volleyball has made me pretty mentally strong.”

For the second time in her collegiate career, Ruddins underwent the grueling process of rehab. She spent her offseason in physical therapy, working with trainer Bob Annable to rebuild her ankle and get herself back into playing shape.

In a sport as dynamic as volleyball, injuries are just a part of the game. That’s especially true for outside hitters, who spend as much time in the air as any other player on the court.

In a way, then, the injuries were hardly a surprise to Ruddins, who hails from a volleyball family and has spent a major chunk of her life playing the sport.

“My aunt [Kim Ruddins] actually played for USC and in the Olympics, and then my dad played for Long Beach, so it was kind of in my family,” Lindsey said. “My older sister started playing club volleyball in eighth grade, but we had always kind of played with my dad and aunt.”

Ruddins credits her older sister, Elise, for providing the most direct inspiration for taking up volleyball. The elder Ruddins sister wound up following in her aunt’s footsteps and played on the USC team.

“[Elise] was actually getting offers her freshman year of high school,” Ruddins said. “It was so fun watching her, and then I started playing.”

Just like her older sister, Lindsey Ruddins started getting noticed by colleges in her freshman year of high school, but she was drawn toward blazing her own trail to UCSB.

The third and final Ruddins sister, Gail, will follow that trail next season, giving the Ruddins family two Gauchos.

Gail Ruddins will be joining a UCSB team coming off an up-and-down season marked with a mixture of highs and lows. For Lindsey Ruddins, however, the season was mostly highs.

The redshirt sophomore was quiet in her first match back, posting just eight kills in a three-set loss to Illinois State to start the season. That match quickly proved to be an outlier, however.

A match against Florida State the next day saw Ruddins post a match-high 36 kills as well as 18 digs for her first double-double of the season. That match was also the beginning of Ruddins’s double-digit kill streak, which will continue into next season.

“[The season] definitely started off rough, you could say,” Ruddins said. “We had four freshmen and a transfer come in, and they came into a team that had been through so much. They all tried from the very beginning and wanted to get better and showed improvement. As a team, our rough preseason just made us work harder.”

Life got a little easier for UCSB once Big West matches started up. The Gauchos went 7-9 in their conference and played Cal Poly, the eventual league champions, in a close match in San Luis Obispo.

“Towards the end of the year, things finally started to come together,” Ruddins said. “I’m super excited for next year.”

Ruddins’s dominance, on the other hand, continued unabated. The outside hitter had eight double-doubles in Big West competition and ran off three in a row to close out the season.

Her rate of 6.30 kills per set in conference play was the best of any Big West player and almost two kills better than the next closest attacker.

Such strong performance garnered plenty of attention, both regionally and nationally. Ruddins won four Big West Women’s Volleyball Player of the Week awards during the 2017 season and earned a spot on the All-Big West First Team.

Nationally, Ruddins was named AVCA National Player of the Week in October on the strength of a three-match killing spree against UC Davis, Long Beach State and Cal State Northridge.

Given her position atop the kills-per-set leaderboard, it’s likely she will be named to the AVCA All-American First Team as well.

That’s a lot of accolades for one person. Nevertheless, Ruddins doesn’t think too much of it all.

“I don’t know, it’s nothing,” the outside hitter said. “It’s not an award for me, it’s for our team. I’ve gotten awards before and it’s cool to get the recognition, but it’s not just me.”

Ruddins might not be too impressed with her own play, but most observers are, especially considering what she’s overcome to earn those awards. Not only do the Gauchos have the best attacker in the nation, they might just have the toughest.