The Daily Nexus
News
Net Neutrality Repeal Would Have Little Impact on UCSB
December 6, 2017 at 10:57 pm by Evelyn Spence

Internet access at UC Santa Barbara will not change if the Federal Communications Commission repeals network neutrality, a regulation that ensures all websites receive equal service. 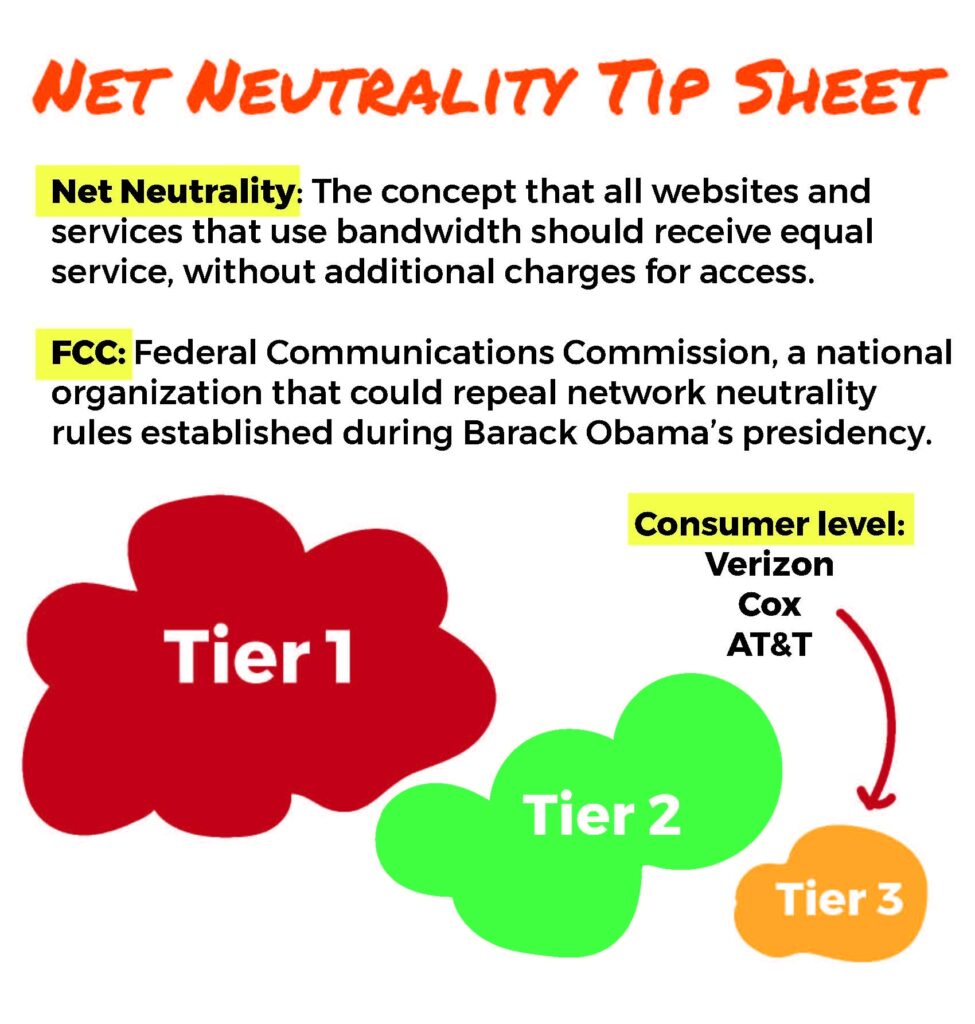 The FCC now plans to vote on a repeal of network neutrality on Dec. 14, which would allow internet service providers to potentially serve users with extra charges and block, slow or speed up access to specific websites.

Dylan Bolf, UC Santa Barbara Residential Computer Network (ResNet) technician, said that because UCSB purchases its bandwidth in bulk from a Tier 1 network, it was treated “neutrally” before the 2015 regulations were in place.

A Tier 1 network is the overarching “backbone” of the internet, according to Bolf. By purchasing from a Tier 1 network, the university acts as a service provider for students.

Regular consumers buy internet from Tier 3, which includes internet service providers like Verizon, AT&T and Cox, and would be subject to the new rules.

Jay Freeman, a software engineer and board member of the Isla Vista Community Services District, explained that service providers like Comcast may want to repeal net neutrality to reduce risk and manage costs.

Because customers demand unlimited internet plans to handle all their needs, Freeman said service companies must anticipate internet usage and predict how it might spike or fluctuate in the future.

“They have essentially forced internet service providers in this horrible position of being insurance companies,” he said.

“Their response to this is ‘we want the ability to charge somebody for the increase in bandwidth use by Netflix, whether it be Netflix or whether it be the user watching Netflix’… That is an argument that I can appreciate,” Freeman said.

“It is still an argument that I find scary because I’ve seen absolute power corrupt absolutely,” he said.

If the repeal goes through, the FCC would essentially restore “the internet to the state that it was two years ago,” Freeman said.

Before Obama-era rules were implemented, residential users were the target of “extra charges and other net neutrality violating ideas,” Bolf said.

For example, AT&T blocked Apple’s FaceTime app from its data plan in 2012. If customers wanted to use the FaceTime app outside of Wi-Fi, they had to pay extra for an unlimited plan.

Open internet advocacy groups claimed this was a violation of net neutrality, and AT&T backed down before the groups filed an official complaint with the FCC.

“We hope that we will be treated neutrally again if these rules are repealed, and would not violate the principles of net neutrality ourselves,” Bolf said in an email, explaining that UCSB would not manipulate the speed of any website.

He added that ResNet “stands unanimously” behind the current net neutrality rules and hopes they remain in place.

However, if the FCC does moves forward with the repeal, Bolf said ResNet would make sure the “students and residents are not impacted in any way that we can.”

“Imagine if AT&T is the exclusive partner of Spotify and you can’t get Pandora on AT&T without it hitting your bandwidth cap,” Hall said in an email.

There will be an economic, innovational and choice impact to consumers in residential areas, Hall said, but “life on our UC campuses continues unchanged in the short term.”

State senator Hannah-Beth Jackson, who represents all of Santa Barbara County and western Ventura County, opposed the repeal saying it would set a “very dangerous precedent.”

“I think the most important thing is that [the repeal] will allow money interests to control content, to control access, to ultimately control thought,” Jackson said.

Congressman Salud Carbajal said large, wealthy institutions like universities would be able to afford higher-quality internet, while a student startup wouldn’t be able to compete with large businesses.

“We need to ensure the internet is a fair and even playing field for all and continue to bridge our country’s existing digital divide,” he said. “That disparity will only grow if we do not act to protect net neutrality rules.”

A version of this article appeared on p.4 of the Dec. 7 print edition of the Daily Nexus.