More than 25 Isla Vista residents were the victims of burglaries this weekend, resulting in tens of thousands of dollars in property loss throughout the small college neighborhood.

Several students were at home when the burglars entered their rooms. Though most were sleeping while their property was stolen, others were forced to confront the suspects.

Chris Perez, third-year film and media studies major, was lying in bed wearing earbuds when a man walked into his bedroom at about 5:15 a.m. on Saturday. Perez initially thought the man was his roommate, but became suspicious when he started looking around the residence with a flashlight.

“I asked, ‘Who are you?’ and he bolted down the street and around the corner,” Perez said. He then discovered that his housemate’s property had been stolen while they were sleeping.

The Isla Vista Foot Patrol (IVFP) and UC Police Department were able to locate and arrest a 17-year-old juvenile suspect from Oakland, California in connection to the crime. They later found a stolen laptop from Perez’s house stashed underneath a car.

“Just the thought of having someone you don’t know rifling through your property right in front of you while sleeping is alarming,” Hoover said. Several victims encountered suspects who were not wearing disguises, though some were wearing ski masks.

Though burglaries are not uncommon in Isla Vista, Hoover said it is rarer to encounter a group of suspects that are “bold enough” to enter homes while residents are sleeping.

Lydia LeMarie, third-year biology major, fell asleep on her living room couch and heard someone enter her home Saturday night. She also assumed it was her housemate returning home, but woke up at about 3:30 a.m. to find that her laptop was missing. The laptop had been next to her while she was sleeping.

Bryn Devita, fourth-year biology major, also said items were stolen from right next to her while she was sleeping on the couch. At least five other people posted on the UCSB Free & For Sale page detailing similar stories on Saturday and Sunday.

IVFP arrested a man for prowling at 9 p.m. on the 6600 block of Isla Vista. While searching his backpack, police found needles, methamphetamine, heroin and burglary tools. Hoover could not disclose his name while the incident is under investigation but said the arrest might be related to the burglaries.

In Goleta, SBSO received multiple reports of thefts from automobiles at the San Vincente and Rancho Santa Barbara mobile home parks. They occurred at approximately the same time as the I.V. burglaries, but Hoover said it is unknown if the two crime sprees were related. 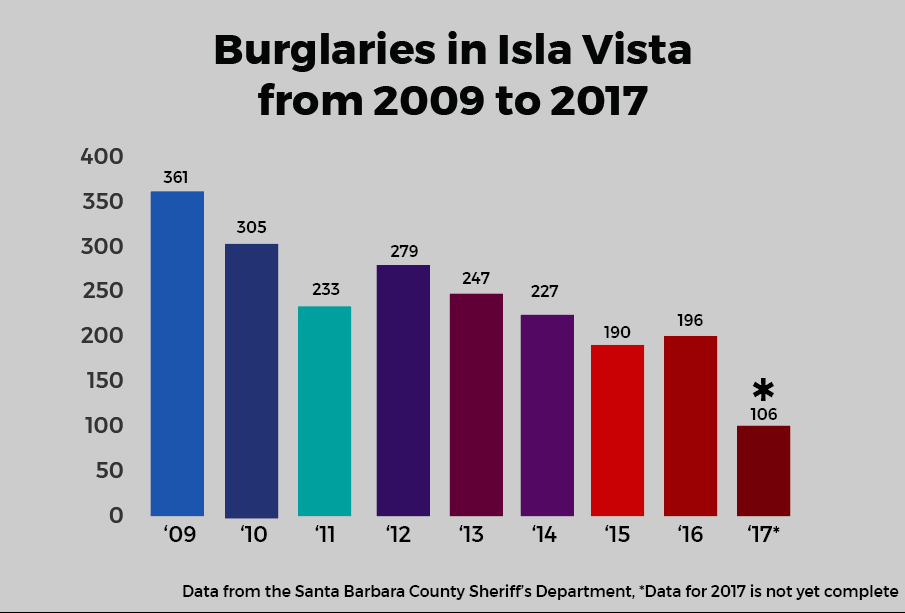 SBSO statistics show that burglaries have generally decreased in Isla Vista over the last 10 years, but Saturday night’s burglaries alone might surpass values for the month of December in years prior.

“This time of year it’s especially, critically important because there are thieves galore out there,” Hoover said, explaining that criminals are “preying” on students who are distracted by final exams and the holidays.

“This is a big wakeup call,” she said. “You should never feel a sense of security that you can leave your door unlocked. Isla Vista, as great as it is, does draw a criminal element of people who are looking to do exactly what happened.”