The Daily Nexus
Sports
UCSB Currently on 4-Game Win Streak, Will Host USD at T-Dome
November 30, 2017 at 5:10 am by Omar Hernandez 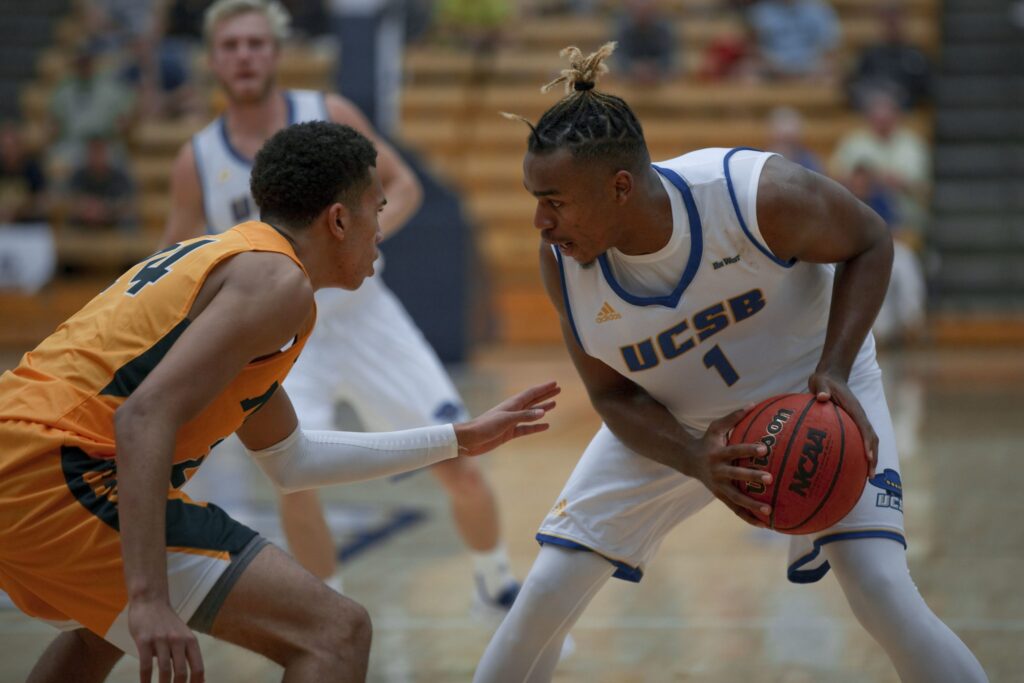 It wasn’t pretty, but the UCSB men’s basketball team grinded out a tough win in San Francisco over the USF Dons on Tuesday night.

The 79-72 victory brought the Gauchos up to 5-2 on the year and kept alive what is now a four-game win streak for UCSB, while the Dons saw their own streak of three wins broken and now sit at 3-2.

The entire first half consisted of the two sides trading buckets, as neither team put together a lead greater than five.

Sophomore guard Max Heidegger started things off for the Gauchos, knocking in a three to give them an early 3-2 lead.

Those would be the guard’s only points until close to the end of the first half, as the Big West Player of the Week was never really able to find his footing on the offensive end, going 5-for-15 from the field for 18 points.

Luckily for UCSB, both senior Gabe Vincent and graduate transfer Marcus Jackson were more than ready to step into the offensive role that Heidegger usually filled.

Vincent has seen his production go down this year, which isn’t too surprising coming off a major injury.

The guard scored 11 points in the first half, and had an answer for each USF make.

He made a pivotal shot halfway through the first; when the Gauchos had conceded two shots in a row and trailed by five, he knocked in a long jumper to keep it a one-possession game. Down the stretch, both he and Jackson made tough plays that offset some of the problems UCSB had rebounding.

Jackson finished with 10 points on 3-of-6 shooting from the field and a 2-for-3 performance behind the 3-PT line.

For the Dons, senior forward Chase Foster played a huge role in ensuring that the game was tied at halftime.

He scored or assisted on the last eight points of the half and led both teams at halftime with 14 points.

His outside shooting (2-for-4 in the first half from three) spread the Gauchos’ defense out, which was key in the rebounding advantage that the Dons took into halftime.

In the second half, the talent of the Gauchos was just too much for the Dons as the game devolved into a slugfest.

The teams combined for 27 fouls in the period, and with both teams missing a boatload of threes (USF went 6-for-33 and UCSB 6-for-19), it came down to who could make the tough shots.

The answer to that question was graduate transfer Leland King II, who had yet another double-double in this game with 21 points and 14 rebounds.

The forward led all players in scoring in and down the stretch, using his combination of length and skill to get key buckets in a short time.

With about five minutes to go, he knocked in back-to-back buckets, which moved the UCSB lead up to five.

The Gauchos never looked back, eventually getting the seven-point victory.

One of the biggest changes that the team is looking to make is not on the court, but rather the culture and atmosphere surrounding the program off of it.

“We’re trying to build this program to have a dominant home court,” Head Coach Joe Pasternack explained. “We need all the students to come out and support these guys. I think they’ll be excited to see the team that we have, which includes one of the top scorers in the country (Max Heidegger is 10th in the NCAA) and Santa Barbara’s best record since 2010.”

The Toreros are a perfect 5-0 to start off the year, and they come into the matchup led by guard Isaiah Wright, who has done a little bit of everything for San Diego so far.

The Boise State transfer is averaging 14.2 points, 6 assists and 6 rebounds a game, leading his team in all three categories.

The task of covering him will probably be up to Jackson and Heidegger, although the great team defense of the Gauchos will make sure that Wright sees a lot of long bodies coming his way throughout the game.

If UCSB stays composed on offense and communicates well on defense, it could have a good chance of ending yet another win streak.