From a bedroom nestled in Orlando, Fla., Lauren Morgan and Jordan Shih are busy producing a plethora of minimalist guitar pop and lo-fi beats. Morgan and Shih pull the strings behind the indie duo known as SALES. Over the past few years, the two have garnered critical buzz with their warm, intoxicating sounds, laying a foundation for the future of pop music on the internet music scene. And on Dec. 7, SALES will be playing a show at SOhO Restaurant and Music Club in downtown Santa Barbara at 8:30 pm.

“We were never trying to make a lo-fi bedroom sound, but we had lo-fi gear. We worked with what we had. And we continue to reinvest in our studio space. We hope that listeners can hear us leveling up our sound as time goes on,” the duo commented.

After they met almost 10 years ago in high school Latin class, Morgan and Shih started hanging out and making music together. After high school, however, the two went their separate ways. Shih pursued a solo electronic career under the name JSHIH and Moran moved to Tallahassee, Tenn., where she started a few punk bands (USA-HOLES and DE NADA, to name a couple). When Morgan moved back to Orlando the duo reunited and the project SALES came to fruition.

Shih has a background in hip hop and electronic music and Morgan has roots in classic rock. “Our sound is what happened when we both switched modes: Lauren was inspired to learn Ableton from Jordan and Jordan was inspired to learn guitar from Lauren,” the duo explained. The sonic blend described above elucidates a distinct element of their sound.

SALES creates an amalgamation of indie, dream pop, hip hop and rock to produce something that is otherworldly to the ear. Their hip hop-influenced production backs electric guitar to create a sound that comes off as simultaneously synthetic and organic. Cuts like “Thurs 6-25” and “Ivy” showcase this unmistakable style. Upon my first listen, the tracks’ simple drum patterns and elegant guitar melodies evoked a melancholic sentimentality I didn’t know existed.

Since cultivating their striking sound, SALES has toured across the country at a variety of venues, performing initially as a pair. Morgan and Shih noted that their music isn’t designed to be played in a live setting. Rather, they aim to reinterpret their bedroom recordings into an encapsulating live experience. And, to this day, their studio still lies within the confines of four bedroom walls. 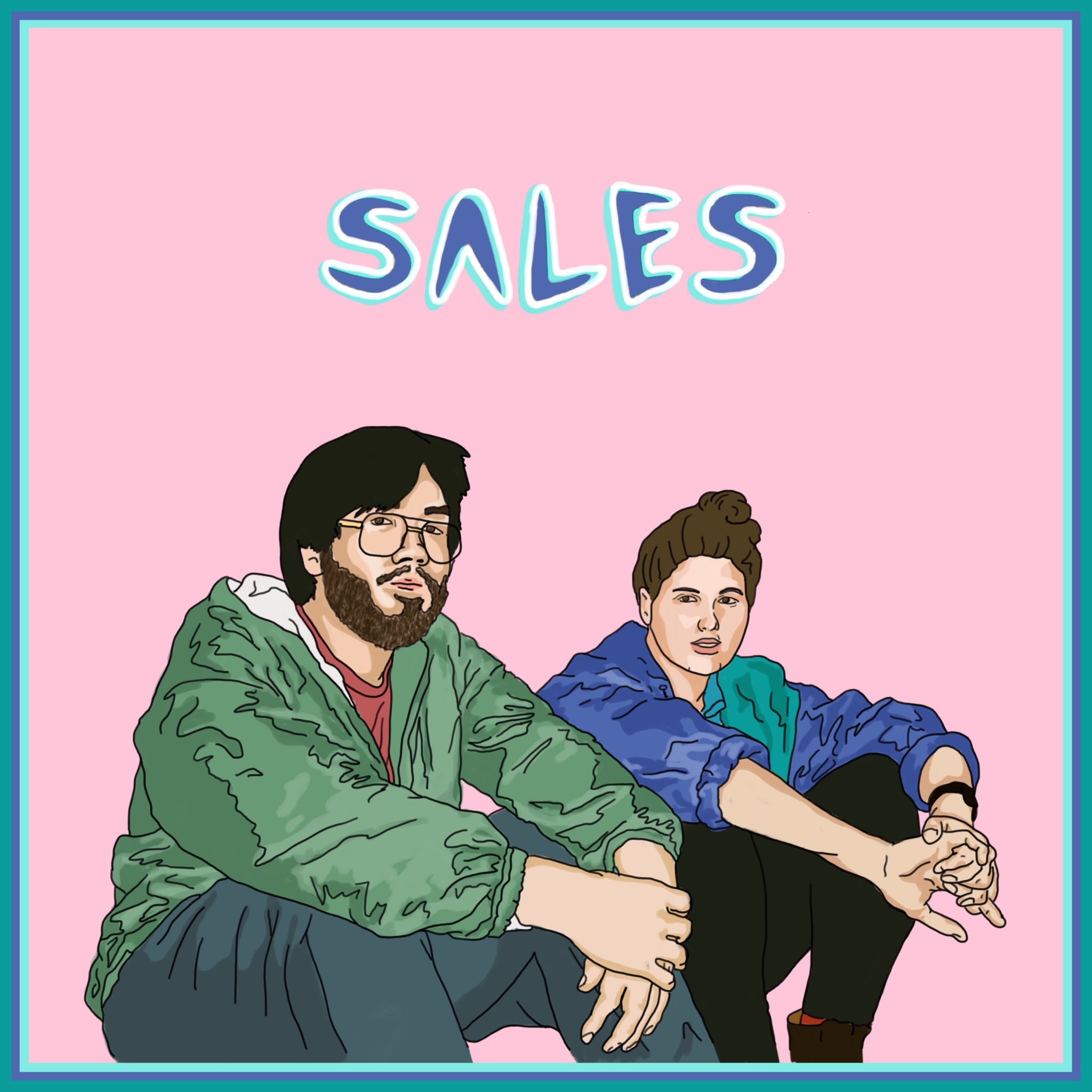 The Florida act is set to play in Santa Barbara next Thursday as a stop on their latest headlining West Coast tour with support from Seattle indie-pop band Chaos Chaos. William Emmons / Daily Nexus

Last year, SALES added a drummer to their roster, replacing the drum machine that Shih previously manned during tour dates. In conjunction with a consequent uptick in energy on stage, the incorporation of a drummer fashions opportunity for more live improvisation, the two explained. Live drumming postulates a uniquely badass aura to their live sets. Drumming on tracks like “Getting It On” displays the degree to which a drummer can potentiate a live sound. The drummer (formerly Joy Cyr, now Malcolm Martin) seamlessly shifts from an acoustic kit to an electronic kit during the song as Shih and Morgan saturate the venue with smooth guitars and angelic vocals.

With their first releases, SALES put forth a stellar EP and full-length album. Their EP features hit singles such as “Vow” and “Chinese New Year,” generating buzz across the internet. The SALES LP, however, revealed a notably consistent collection of sounds that set the duo apart from their previous catalog and established SALES as an up-and-coming force in music. Since then, the duo has dropped the first single from their upcoming project. “Talk A Lot” is a welcoming coalescence of familiar sounds as well as a maturation of their preceding work. The song builds into a cacophony of swirling vocals and guitar leads, allowing Morgan to demonstrate the breadth of her vocal range.

One thing that is particularly striking about SALES is their well-curated, thoughtful art direction. In aforementioned work, all album, single and EP cover art, with the exception of “Talk A Lot,” was done by the same artist, Alana Questell. It’s hard to pinpoint why Questell’s artwork so perfectly marries with the duo’s music, but it does so in an irrefutable fashion.

Analogous to the nature of SALES’ music, Questell’s art is vibrant yet minimal. This trend holds true for the bulk of the group’s catalog; everything from their merch to their music videos exhibits a high level of quality. There’s nothing excessive or superfluous about it — everything that is present in their work serves some sort of purpose.

Experiencing a manifestation of this aesthetic live is breathtaking. Morgan and Shih reconstruct their studio sound in an unambiguously satisfying style, laying elements of drums and guitar to provide the footing on which the two can flourish into sonic bliss.

In terms of collaborative work, the two indicated that there are some joint projects on the way. “We have opened up a little more to collaboration and actually worked with a rapper a few weeks ago,” they said. “It was incredibly inspiring and energizing to work in a studio setting with an artist we respect.” In the future, the two hope to have a more established space outside of their bedrooms that could be used as a space for other artists to work collaboratively with the band on future SALES projects.

SALES takes on the world with a DIY, made-from-scratch mentality. The independent duo is holistically immersed in their craft. “Doing everything ourselves wasn’t supposed to work. People will tell you that you need to join a label to have value and/or a career, but we have proven otherwise,” they said.

Although money may not be flush for the two, they were both able to finally quit their jobs and focus on SALES full-time. They truly believe in the music they make and surround themselves with those who provide support for their musical endeavors. They bow to no label heads, no industry release cycle — only the organic flow of creativity that sprouts from their passionate work ethic. They release music when they want to, because they want to.