The Daily Nexus
Sports
Amidst 5-Game Slide, Gauchos Aspire To Get Back on Track
November 29, 2017 at 6:35 pm by Calvin Thrift 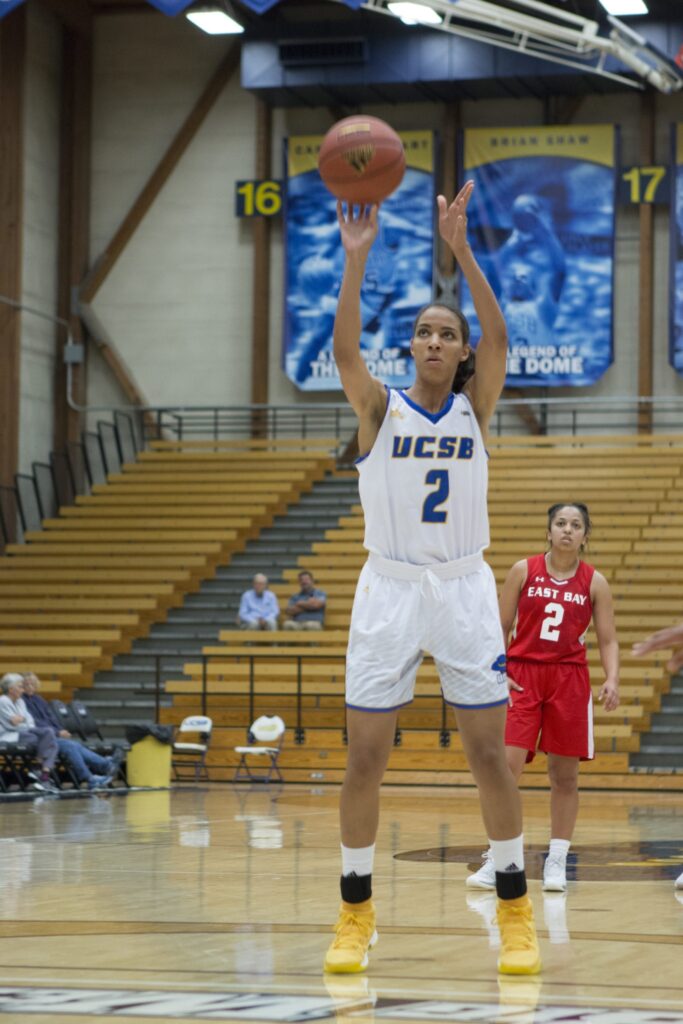 Akilah Jennings shoots an and-one to complete a three-point play after being fouled. Stephen Manga/Daily Nexus

Following a loss to the University of San Diego Monday night at home, the UCSB women’s basketball team will have a few chances to get back to winning this week. Although the USD loss has pushed the Gauchos to 1-5 overall, they host Fresno St. at the Thunderdome Thursday night in hopes of redemption in front of a home crowd.

Fresno St. seems to have entered a rut itself this season, having lost its last four games. The Bulldogs sit at 1-4 overall and will be aiming to get back on their feet when they visit Santa Barbara as part of their four-game road trip.

In their Monday night loss to USD, the Gauchos turned the ball over a staggering 24 times and managed to score only 8 points in the final ten minutes.

From an outside perspective, it appears the Gauchos have the tools to start winning games if they can manage to cut their turnover numbers down. Santa Barbara has demonstrated that its offense is capable of winning games, posting 96 points in the early-season win over Northern Arizona University.

The ability looks to be there for the Gauchos, it just seems to be an issue of consistency.

The Gauchos have been working to improve defensively in practice this week, as Head Coach Bonnie Henrickson explained, “Today was about defensive positioning, communication and protecting the paint.”

Henrickson stressed that defensive mentality isn’t a skill an entire team acquires from one day of work; rather it’s a learning process.

“It sounds simple, but it’s not. Those habits don’t happen overnight so we’re not going to fix it overnight. Today I thought our effort was better,” Henrickson said. “and we were better communicators.”

“The reason people win is on the defensive end, and how much you win by is your offense,” Henrickson said.

Perhaps this defense-prioritization will get the Gauchos back on a winning track.

In their last three contests, the Gauchos have failed to eclipse the 60-point mark but they have a more favorable matchup at home versus a similarly struggling Fresno St. team.

The Bulldogs have so far averaged just under 60 points per game while allowing opponents to score just below 70. In last year’s matchup with the Bulldogs, UCSB beat the Bulldogs on a buzzer beater to secure the 50-49 victory.

Fresno St. is currently averaging 15.2 turnovers per game while the Gauchos are averaging 16.7, so the matchup will surely be a test of each team’s ability to keep possession.

Both the Gauchos and the Bulldogs will be looking to end their losing streaks Thursday night at 7:00 pm in the Thunderdome.

Win or lose to Fresno St. on Thursday night, UCSB will travel south to take on No. 7 UCLA for a Sunday afternoon game at Pauley Pavilion.

UCLA has been rolling this season, standing at 5-1 with their only loss coming from a matchup with the No. 1 team in the country, UConn.

If the Gauchos get hot early from downtown, freeing up the post for Drew Edelman, it could make for a close game against one of the best teams in the country. Still, Santa Barbara will have to value possession since the Bruins will likely pressure the trio of freshman ball-handlers for UCSB.

Whether or not the Gauchos can pull off an upset Sunday, they will gain valuable experience from playing a top-tier UCLA team in a big-stage atmosphere.

The action will tip off in Pauley Pavilion on Sunday at 1:30, as the Gauchos, look to knock off the No. 7 Bruins and get back to winning.