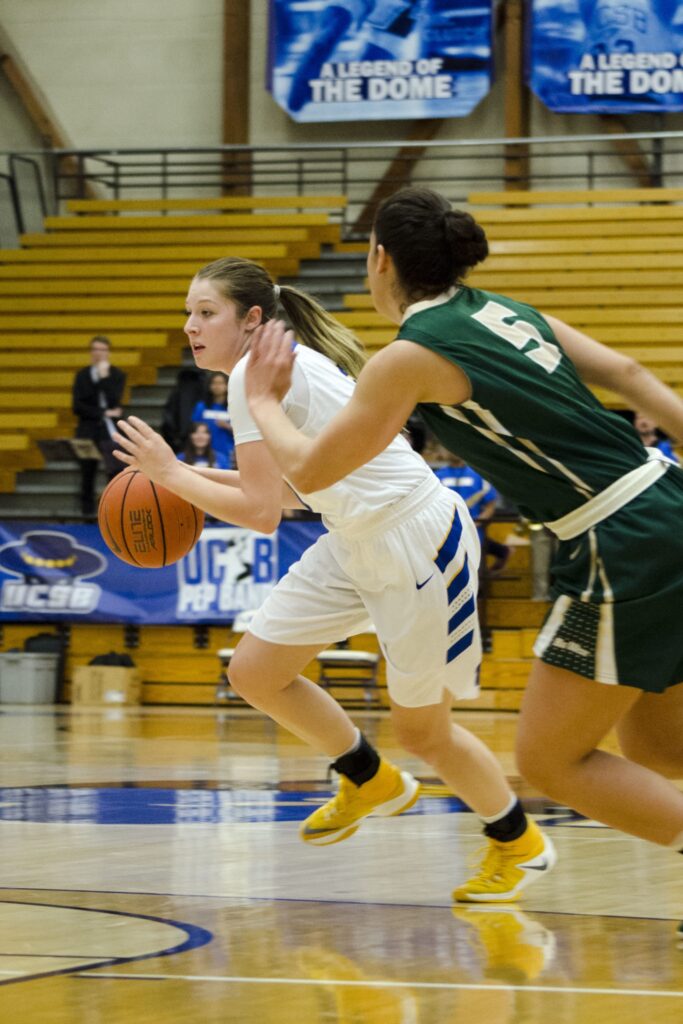 Over the holiday weekend, the UCSB basketball team had little to be thankful for; as the UCSB women’s basketball team lost both of its games in the Saint Mary’s Tournament. On Friday, the Gauchos lost by 30 points to Saint Mary’s 89-59. Then on Saturday, they fell to the University of Alabama at Birmingham 67-54.

With these two recent losses, Santa Barbara now sits at 1-4 and is in the midst of a four-game losing streak.

Following their collapse at home against Seattle, the Gauchos had a week to prepare for the tournament in Moraga, California. Yet, Santa Barbara was outmatched by the host team in the opener as the Gaels of Saint Mary’s handed Santa Barbara its third consecutive loss, which was then followed by a defeat to UAB.

The afternoon game began with UCSB getting the ball stolen, allowing the Gaels to get on the board first 2-0. Overall, Saint Mary’s forced 16 total turnovers and converted those into 25 points. Including the opening steal, Saint Mary’s guard Stella Beck tallied 6 steals on the day. The senior also racked up 18 points off 6-9 shooting and recorded her 1000th career point against Santa Barbara.

The Gauchos held their only lead of the game after a Sarah Bates layup and a single Drew Edelman free throw made it 3-2 with 8:23 left in the first quarter. Edelman, a 6’4 redshirt senior, had another frustrating game, getting in foul trouble early and battling talented Saint Mary’s post players.

Despite picking up two fouls in the first four minutes, Edelman contributed 10 points and a team-high 7 boards for the Gauchos. Saint Mary’s found much of their success down low, outscoring UCSB 52-16 in the paint and out-rebounding the Gauchos 42-32.

A slow start for Santa Barbara forced head coach Bonnie Henrickson to take a 30-second timeout at the 4:52 mark. Out of the timeout, the Gaels went on to extend their 11-5 lead to 16-5. Santa Barbara finally got rolling thanks to sophomore guard Aliceah Hernandez.

Hernandez scored all of her 13 points in the first half, but it wasn’t enough to overcome the Gaels, led by Sydney Raggio. The junior forward had 19 points and 9 rebounds, both game highs, and shot an efficient 8-13 from the field.

The first quarter ended with the Gauchos making a bit of a run and the chance to cut the Gael lead to 3, but Chaya Durr’s layup attempt was blocked with just one second remaining. Saint Mary’s led after 10 minutes of play 22-17.

After the somewhat hopeful end of the first quarter for UCSB, the Gauchos went on to shoot only 23.1 percent from the field in the second quarter. Saint Mary’s used big plays from Raggio and Beck to outscore the Gauchos 21-14 in the quarter.

At the 6:25 mark, center Natalia Bruening made a pair of free throws to put Santa Barbara within 4, down only 25-29. But, the Gaels proceeded to go on a 10-0 run to lead the Gauchos 39-25 with 3:26 remaining. UCSB used a pair of threes from Sarah Bates and Tal Sahar to end their scoring drought, but the Gauchos remained behind 43-31 at the end of the half.

The third quarter of play saw UCSB’s struggles continue, turning the ball over 5 times and only scoring 16 points while allowing 26. Edelman scored 8 of her 10 in the quarter, but Akilah Jennings and Danae Miller were the only other Gauchos to score, each contributing 4 points. Saint Mary’s extended their lead using an array of scoring to go up 69-47 heading into the fourth quarter.

Down by 22, a Santa Barbara comeback seemed unlikely. The Gaels’ reserves held UCSB to only 12 points in the final quarter and an abysmal 16.7 percent shooting. At the final buzzer, UCSB was defeated by Saint Mary’s 89-59. The 30-point margin is Santa Barbara’s largest deficit of the season.

Overall, UCSB shot 30.5 percent from the field and 28.6 percent from three. The Gaels, on the other hand, shot above an impressive 50 percent in both categories. With the win against the Gauchos and then a fourth straight win recorded against Indiana, the Gaels won their own tournament and sit at 4-1 overall.

Luckily for the Gauchos, they had a chance to turn around the next day and compete. Facing the University of Alabama at Birmingham on Saturday, Santa Barbara looked to bring a bit more energy to the court.

Santa Barbara opened the game with a three-ball from junior guard Akilah Jennings, one of her four threes in the game. Jennings, in her first season at UCSB, scored a team-high 14 points and shot 4-8 from three-point range. Unfortunately for Santa Barbara, Jennings was the only Gaucho to score in double figures versus the Blazers.

Using a pair of threes from Aliceah Hernandez in addition to a three from Nina Radford, Santa Barbara spread the floor early. UAB was held to 4-17 shooting in the quarter, with big buckets coming from junior Deanna Kuzmanic, who scored 5 of her game-high 24 points in the first. At the end of the first, the Gauchos led the Blazers 16-10, holding UAB scoreless in the final 4:53.

Fellow Blazer Angela Vendrell got in on the fun as well, scoring 6 points in the quarter. Vendrell, a sophomore from Spain, ended the game with 8 points and a game-high 12 boards. The huge quarter for UAB put the Blazers up 34-28 at the end of the half.

Down six at the start of the second half, UCSB used a 20-point third quarter in able to tie the Blazers at 48 heading into the fourth. A pair of free throws from Radford and two more threes by Jennings to open the quarter tied the game at 36 with 6:41 to go.

Jennings scored 8 points in the quarter and Santa Barbara post-players Edelman and Bruening added four points each. From there, UAB and Santa Barbara traded baskets on efficient shooting. Each team shot above 50 percent in the third to set the stage for a decisive final quarter.

The final 10 minutes began with the Blazers going on a 13-0 run. A close game just minutes before, UCSB found itself down 48-61 with 5:52 left in the game. Out of gas, the Gauchos couldn’t rally a comeback.  On 20 percent overall and 12.5 percent from three-point range, the Gauchos managed to only score 6 points in the final quarter. Sarah Porter ended the drought with a layup and-one to make it 51-61 at the 5:30 mark. The only other scoring for UCSB came from an Akilah Jennings three with just 56 seconds remaining.

The Blazers dominated the fourth quarter to come away with the 67-54 win. Kuzmanic outscored the Gauchos herself in the fourth, scoring 9 of her 24 in the final quarter. UCSB’s persistent turnover issue remained, as the Gauchos turned the ball over 15 times.

With the win, UAB moves to 4-1 overall while handing the Gauchos their fourth straight loss and first winless tournament since the 1992-93 season.