The Daily Nexus
News
Goat Yoga is Coming to Isla Vista in December
November 27, 2017 at 10:08 am by Kayla Larson

Goat yoga will be coming to Isla Vista this Saturday, giving community members the chance to add some hooves to their downward dogs. 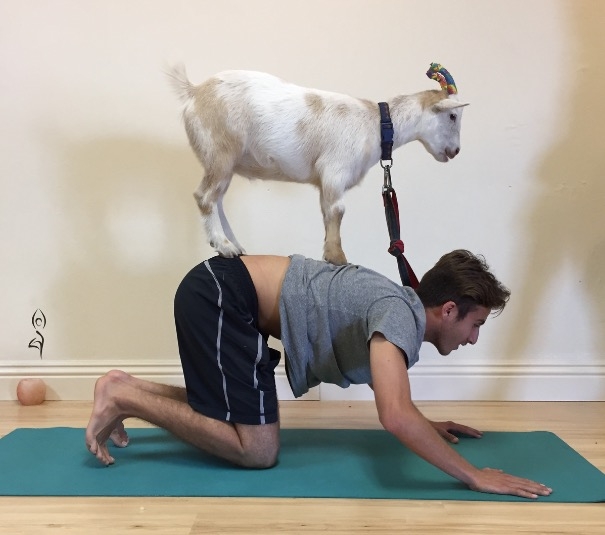 Bahar said he wanted to bring goat yoga to Isla Vista because students are overwhelmed with school and do not find time for themselves. Courtesy of Eli Bahar

Goat Yoga is a fitness trend that began in 2016 and has been considered a type of animal therapy. During a goat yoga class, goats interact with participants by jumping on participants’ backs or snuggling on the yoga mat.

The goat yoga class in I.V. will be held at the Santa Barbara Hillel this upcoming Saturday, Dec. 2, at 11 a.m. A maximum of 50 people are allowed in the class, and the class will cost $40 per participant.

Eli Bahar, a second-year undeclared major and host of the event, said goat yoga is more beneficial than regular yoga because the interaction with goats releases endorphins, which stimulates a positive feeling in the body.

“It connects you to the people around you and provides a friendly atmosphere,” Bahar said. “It is more than zen and more of an experience.”

Bahar grew up in Los Angeles and said he discovered goat yoga last August. He was on a waitlist for three months before he could participate because there is only one studio in Los Angeles that offers the unique yoga class.

“It was an amazing experience and a crazy wild adrenaline rush. You are just surrounded by people having a good time,” Bahar said.

Bahar said he wanted to bring goat yoga to I.V. because UCSB students “stress out and don’t find time for themselves.”

Bahar contacted a farm in Sun Valley, Calif. that brings certified goats to yoga events. It is “fairly expensive” to bring this experience to Isla Vista, Bahar said, but he expects a good turnout at the class.

Goat yoga was created by Lainey Morse, a goat owner from Albany, Oreg. Morse was encouraged by a local yoga instructor to connect her love of goats with the practice of yoga.

Goat yoga is animal-assisted therapy, according to Morse’s website, and is an “unbelievable distraction” from work, politics or sickness.

This is not Bahar’s first time helping students destress before finals. He also started a business called Party Ice which delivers ice cream sandwiches to residents in the Santa Catalina Residence Hall the week before midterms and finals.

“Goat yoga is a step above Party Ice and is still a way to help people destress,” Bahar said.

Those interested in signing up for goat yoga can email Bahar at ivgoatyoga@gmail.com.

My God! People are foolish.