The Daily Nexus
Sports
UCSB to Participate in Saint Mary’s Tournament After Long Week Off
November 24, 2017 at 10:00 am by Kendra Jackson 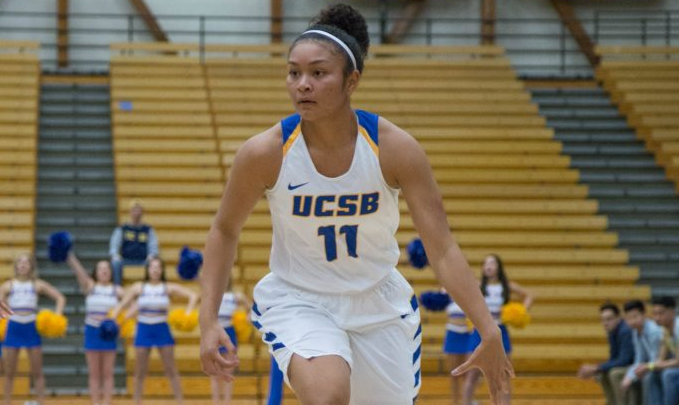 The UCSB women’s basketball has been undergoing a slow start, losing its last two games after winning its season opener, and are now currently sitting at 1-2.

In the Gauchos’ last game versus Seattle university (2-2) at home, though ending in a close margin, proved to be a task they let slip through their hands – giving up a 21-point lead.

UCSB had a week off to either ponder on its losses, or look forward to the tournament ahead.

Losing two close games in a row has the possibility to be detrimental to the team morale if the roster doesn’t maintain mentally tough.

“The upperclassmen have a responsibility to make sure that doesn’t happen with the young kids, because the upperclassmen know it’s a long season and we can only control what we can control,” Head Coach Bonnie Henrickson said. “We’ve got to look at it as a staff and as a program and the upperclassmen see it more clearly than the young kids do. It’s about ‘what did we do? What happened?’ When you lose, don’t lose the lesson.”

This weekend, Santa Barbara will be playing in the annual Hilton Concord Classic tournament on Friday and Saturday, facing two worthy opponents – Saint Mary’s of California and (2-1) and University of Alabama Birmingham (3-0).

“I’ll start working on Saint Mary’s and I’m going to have to sneak a peek at UAB, because we can’t just turn that over overnight,” Henrickson said. “Some of the stuff they run offensively, both teams play man so that helps us, we’re not having to work on man and zone [defense]. And some of the things that UAB runs, we have defended already. But obviously our primary focus is to get ready for Saint Mary’s because we’ve got our hands full because they’re a really talented team.”

The first opponent, Saint Mary’s, is coming off a dominating 82-64 home win versus Cal Poly.

Junior forward Sydney Raggio finessed her way to her second double-double of the season, scoring a game-high 23 points and grabbing a whooping 10 rebounds.

SMC has been an offensively powerful team, winning their last two games after opening up their season with a loss. A pivotal aspect of their wins has been a strong offensive presence in the first quarter, bursting on the court with shot after short, setting the pace for the game and giving themselves a nice lead.

“Saint Mary’s is a lot of ball reversals, with at least [probably] two to three on-ball screens –what they run offensively, so we’ve started to look at that already.” Coach Henrickson enlightened.

Santa Barbara will need to keep their foot on the gas against the offensively aggressive home team, being careful not to give up a lead like they did against The Redhawks, or fall behind too early as was the case against Santa Clara.

Being that it is a tournament, though, the next opponent on UCSB’s itinerary is another commanding challenger.

The Blazers, the second UCSB opponent of the event, is coming in hot with a currently undefeated record of 3-0.

The University of Alabama at Birmingham has crushed each of their last three adversaries, winning each game by a large margin of 10 points or more.

Their most recent faceoff was against the Miles Golden Bears, in which UAB held their foes to only 2 points in the first quarter.

The home team Blazers utilized a vicious well-adjusted game plan consisting of both intense offense and suffocating defense. They dominated the paint by scoring a notable 40 points to Miles’ 14, while also outrebounding the Golded Bears, 43-to-31.

Sophomore forward Rachael Childress was in attack mode, chalking up 14 points to lead the Blazers in scoring.

UAB has not scored less than 13 points in any quarter in all of their last three games.

The UCSB women’s basketball team will need to make sure they stay firm on defense, hard-hitting on offense, and remain fundamentally sound, in order to overcome the well-rounded force of the Blazers.

The quick turnaround from one game to another is not something to be taken lightly, but the factor of the unknown is not an issue.

“The good thing for us is, we know it’s UAB. We know it’s not the winner of UAB or Indiana. It’s good that we know it’s UAB from a prep standpoint, cause to try and prepare for three teams right now, would be difficult for us and challenging, for as young as we are. So, we might sneak in some stuff on Wednesday [at practice] that might be different for us, that we haven’t seen.”

According to Henrickson, her practices with the Gauchos are very tough, and is where she really pushes her players to see what they can do. She stressed that the disbursement of player minutes and standout bench play is going to be critical throughout the tournament, especially with such a young team.

“It’s about production. Players earn minutes in practice. Our bench has to be ready to produce. We’ve got a strong bench and we’re very confident in that.”

The youth of the team, along with the offensive woes of Santa Barbara, will all be put to the test this weekend.

UCSB will first face-off against the Saint Mary Gaels this Friday, Nov. 24. And will then go head-to-head with the UAB Blazers on Saturday, Nov. 25.

Both games in the tournament will take place in Moraga, California at McKeon Pavilion.