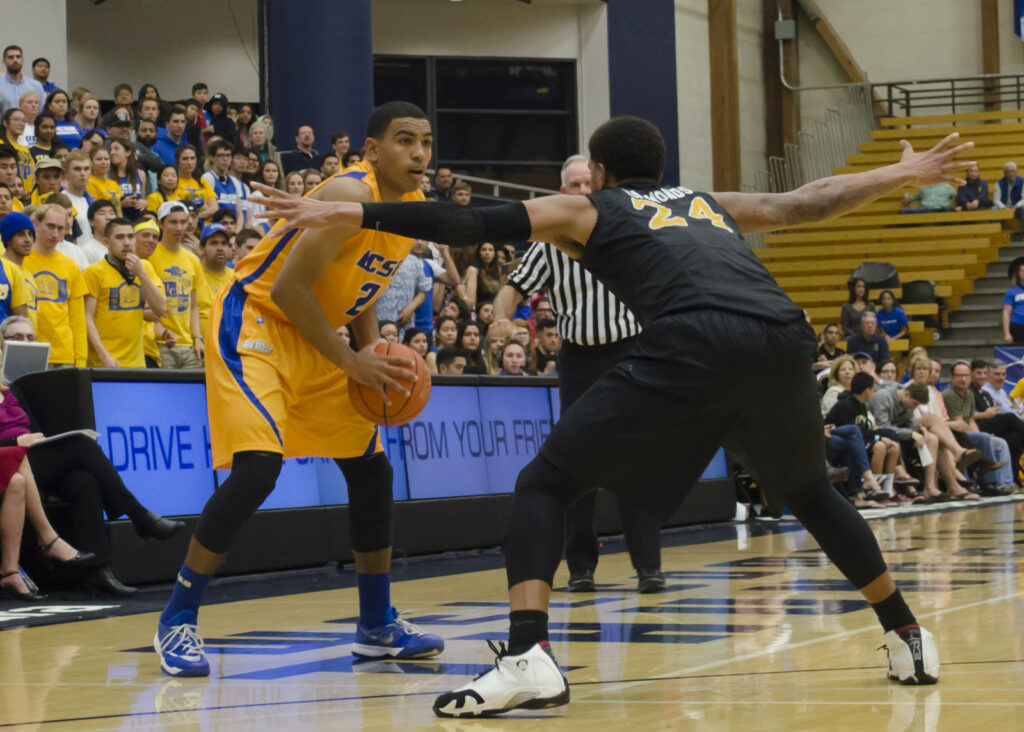 After two consecutive losses in Progressive League games, the UCSB men’s basketball team bounced back with a 92-84 victory over Pepperdine University on Monday night. The win brought the Gauchos to a 2-2 record, and marked the second consecutive loss for the Waves, who are 1-3 on the season.

Heidegger’s offensive contribution continues to be one of this season’s most captivating storylines. Following a 2016 season in which he averaged only 7.6 points per game, Heidegger has lit up the scoreboards this season, leading the team with 23.5 points per game.

The game also marked the return of graduate transfer guard Marcus Jackson, who was sidelined for the Gauchos’ first three games due to a hip injury. Jackson hit the ground running in his first official game as a Gaucho, with 16 points and three steals in 36 minutes of play.

Graduate forward Leland King II and senior guard Gabe Vincent continued to aid the Gauchos on both sides of the court. King II scored 19 points and led his team in rebounds with 7, while Vincent scored 14 points and led with eight assists, tying his career-high set in UCSB’s season opener. Vincent appears to be finding his groove this season after a brutal knee injury that sidelined him in 2016.

Despite Pepperdine’s impressive performances from sophomore guard Kameron Edwards (27 points, 5 rebounds) and freshman guard Colbey Ross (25 points, 5 rebounds), the Waves were unable to overcome the Gauchos first half lead. The Gauchos were able to halt the Waves offensive runs in the second half and finished the game off to secure a 92-84 win.

While the Gauchos were unable to dominate in the “rebound war” against the Waves, which they lost 39-22, they were able to force 20 turnovers while only giving up six. This gave the Gauchos a serious edge in points off turnovers at 19, compared to the seven scored by the Waves.

After a tough win against Pepperdine, the Gauchos will move on to the Progressive league finals against the University of Montana, who is 3-1.

The Grizzlies played a tight game in their semifinal matchup against Oral Roberts University, who they defeated 69-64. Junior guards Ahmaad Rorie and Michael Oguine controlled the majority of the Grizzlies scoring with 18 and 14 points, respectively.

The Grizzlies emerged as a defensive powerhouse in their victory against Oral Roberts, recording 10 steals, while forcing 16 turnovers. The guard duo of Rorie and Oguine shut down the Golden Eagles on defense in the first half, holding their star guards Sam Kearns and Austin Ruder to two and five points, respectively.

While the Golden Eagles guards were able to break free in the second half, the Grizzlies proved to be a team that could present problems for the Gauchos’ talented backcourt.

The Gauchos will hope for more dominant performances from their frontcourt, which Head Coach Joe Pasternack touted as being the best in the Big West following their season opening win.

However, improvements will need to be made as the Gauchos’ frontcourt struggled against the Waves on Monday, giving up 46 points in the paint and 12 offensive rebounds.

The Grizzlies have outrebounded each of their regular season matchups, so the Gauchos will rely on their rebounding leaders, King II and senior forward Jalen Canty, who recorded 13 points and five rebounds in UCSB’s win over Pepperdine, to regain control of the “rebound war.”

It will take effort on both sides of the court for the Gauchos to outmatch the Grizzlies. However, if their talented guards can overcome the Grizzlies stout defense and if their frontcourt can control the paint, the Gauchos are fully capable of finishing the Progressive League Classic on top.