Dozens of  students from the Resource Center for Sexual and Gender Diversity demanded that they separate their leadership from UC Santa Barbara’s Women, Gender, & Sexual Equity Department on Friday, saying their umbrella organization did not treat them fairly. 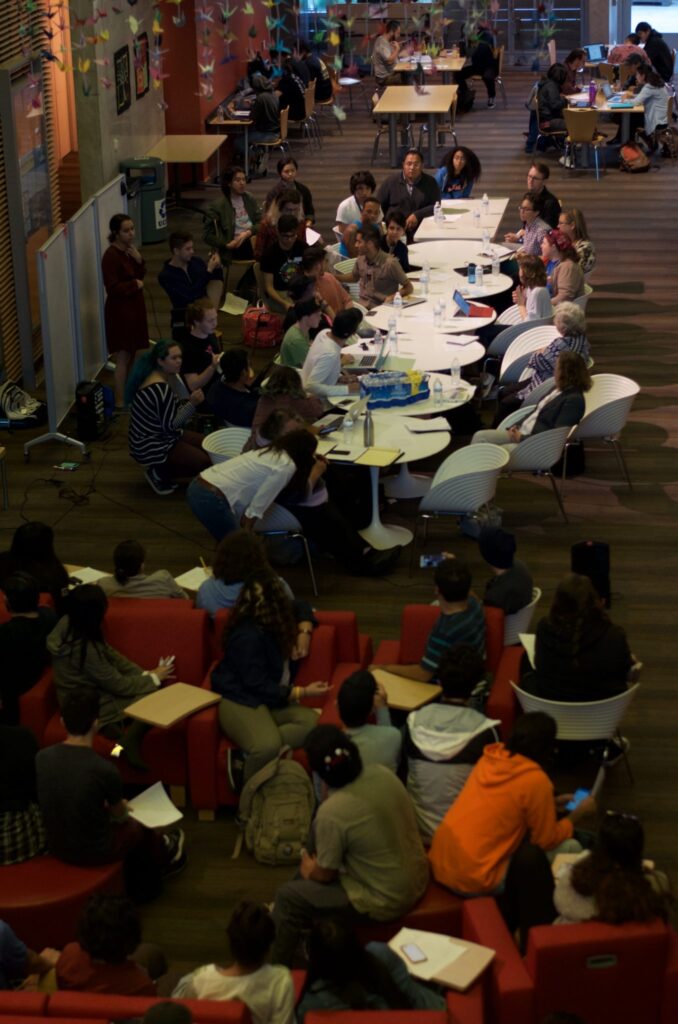 The meeting, which was originally located in the Resource Center for Sexual and Gender Diversity, was relocated to the first floor of the Student Resource Building due to a overflowing student turnout. Will Tran / Daily Nexus

The meeting focused on a list of demands and an incident that occurred on Nov. 14, when Ale Muro, Resource Center for Sexual and Gender Diversity (RCSGD) associate director, was fired and escorted out of the building by a plainclothes police officer.

UCSB agreed to meet several demands, including RCSGD’s removal from the Women, Gender, & Sexual Equity Department (WGSE), a new building for the center, a doubling of RCSGD’s program budget and emergency funding for the queer and trans health advocate position.

They also agreed to review proposed resignations for Kim Equinoa, assistant dean of the WGSE and Dolan, RCSGD executive director. Administrators said they would reevaluate Muro’s termination by Nov. 30.

During the discussion, RCSGD and WGSE staff disagreed about the extent of police presence in Muro’s firing on Tuesday.

According to RCSGD representatives, Muro was escorted out. Dean of Student Life Katya Armistead confirmed there was an officer in the building, but said they did not escort Muro out.

“I want to apologize and say that I’m really sorry for the trauma that was caused with the police being present,” Dolan said.

The UCSB administration agreed to welcome her back if she is willing to return.

“I’m really hoping that this is going to be effective permanent change to the way that things run in student affairs,” Mernin said.

The WGSE was first opened in Fall of 1975 and moved to its current location in the SRB in 2002. It was originally named the Women’s Center Department and its current title was changed in 2011 to reflect the programs within the department, including the RCSGD.

The first resolution passed on Oct. 18, but the Senate has not yet voted on the second, which senators drafted for an emergency meeting on Thursday. 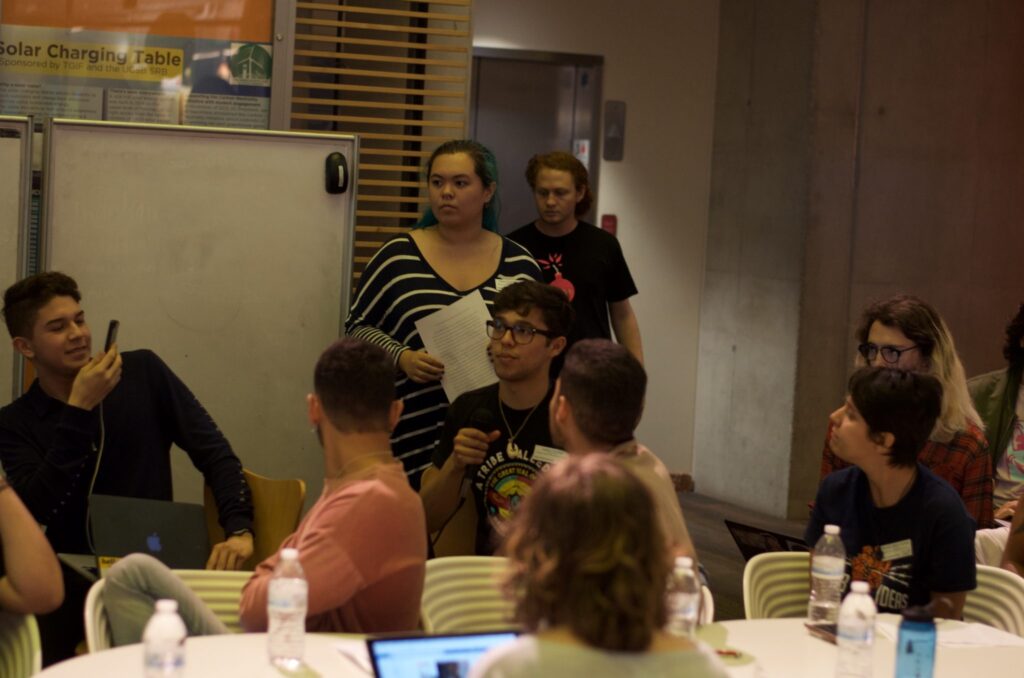 Naia Al-Anbar, fourth-year anthropology major and Queer Commission external coordinator, said the center’s anger comes from how the administration put students in harm’s way and expressed frustration with the lack of progress with the demands.

“For years students have asked time and time again for demands like these to sit at this table, to ask you to do something, and yet you waffle. You do nothing,” Al-Anbar said, speaking to Klawunn.

RCSGD staff members and students noted throughout the meeting that the purpose of the center is to serve as a safe space for students of all backgrounds and that for many this means the absence of police presence.

Mernin read a statement written by the RCSGD staff in response to Muro’s firing. The statement said the incident put the safety of the space, the student’s trust and students and staff members of color in harm’s way.

They called for the university to reinstate Muro and Salazar and begin to put these changes in effective immediately.

The RCSGD also demanded the resignations of Equinoa and Dolan for perpetuating violence against queer, transgender people and marginalized communities and their complicity in “perpetuating the systems of white supremacy at this institution.”

Mernin’s reading of the statement was followed by RCSGD’s list of demands, which focused on creating of a permanent LGBTQIA Resource Center, separate from the WGSE.

The RCSGD said they originally presented a list of demands to Chancellor Yang on June 15, 1998 — 19 years ago. They presented a revised version to Klawunn on Oct. 27, 2017.

The request for a designated RCSGD building has persisted in the demands since 1998, according to Mernin. 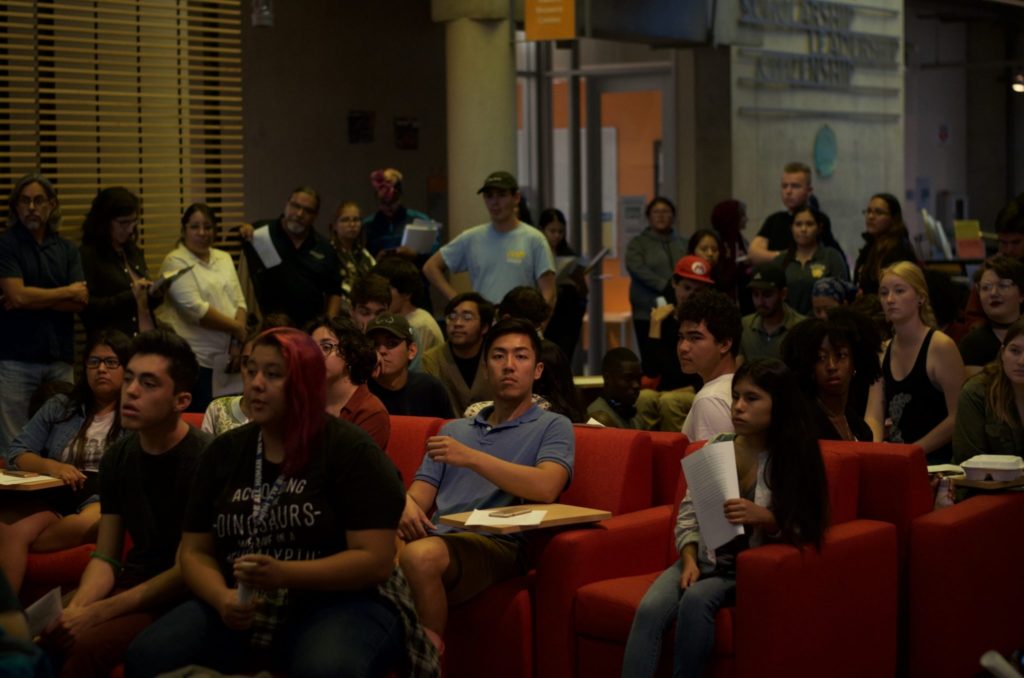 A.S. President Hieu Le was present at the meeting, along with dozens of other students. Will Tran / Daily Nexus

The proposed building would have two entrances: one main entrance and a second discreet entrance designed for students who are closeted or who may not be comfortable going through the main entrance.

Plans also included a front office, private offices for permanent personnel, gender-inclusive restrooms, a study space, organization meeting rooms, a lounge, a kitchen, a library, a clothing closet and an art gallery. A proposed list of furniture and equipment was included in the plans.

Other additions to the center included a community garden and emergency housing rooms complete with a bed, closet and drawers.

The list of demands included a note that the center will be open to everyone on campus in addition to those who identify within the LGBTQIA spectrum.

Posters advertising the meeting were seen around campus and contained phrases including “WGSE out of the RCSGD,” “this place is a dumpster fire,” “keep your white liberal politics out of our spaces” and “UCPD out of the RCSGD.”

Mernin clarified that students who put up the posters acted on their own behalf and were not connected to the RCSGD.

Rose Houska, fourth-year art and black studies double major, said her main concern is the safety of the RCSGD as a space for students of different backgrounds and identities.

“I’m a resident associate in housing, and I think that it’s very important in my position to make myself available to queer students,”  Houska said.

This is so dumb.

waste o my monny
i am a black student

Sorry you feel that way, however, that money is helping many students.

do you mean it’s helping all 5 mentally ill students who don’t identify as the gender they were born with?

liberals are out of control

I just hope to reach out to you and allow you to understand that when you said “money from EVERYONE that goes to school here” that also includes yourself, shall you ever need to use those resources, they are available.

Student Resources to HELP students.
Why does that bring you discomfort?

this is. waste of my tuition money and fees. most people would agree with me
liberals have no problems spending other people’s money in the name of their batshit agenda

This is getting ridiculous and out of hand. Every argument made here has been an emotionally driven fallacy. As a student here I am exhausted of seeing this and seeing my fees go down the gutter.

the liberals are out of control

Its not even the liberals, these people make liberals look bad. They create tension where it is not needed and further divide people even more

there are only 2 genders

gender diversity doesnt deserve its own building when you’re cramming 3 freshmen into one dorm pom. get your priorities straight

Waste of my loans, I am a gay student

How about some information on why Muro was fired and escorted out of the building?

What was the reason giving for firing Muro? Something seems up if they called the police to escort them out..

Police presence causes harm? Why? Because they actually work for a living and that shames them?

This should be a lesson to any employer thinking of diversity hiring trans student students From this school.

Literally everyone in this article looks bad. What a bunch of selfish losers. Maybe take a minute to thank the taxpayers who are enabling your bullshit?