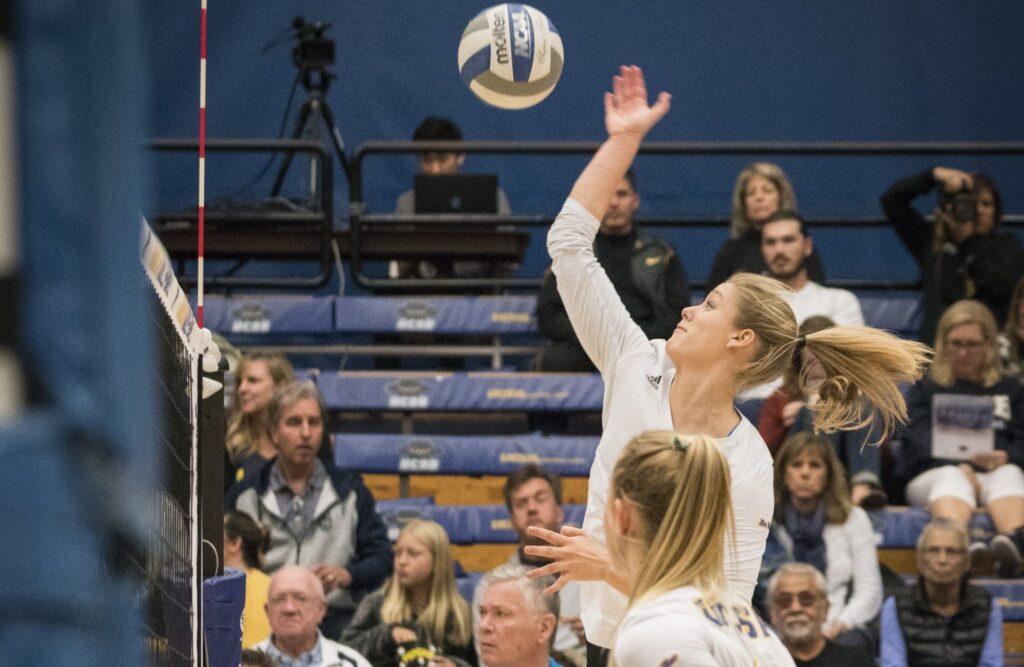 With only three matches left in the season, first place in the Big West is out of the question for the UCSB women’s volleyball team. But that doesn’t mean the Gauchos are just playing with no desire to compete.

“We are focusing on playing our best volleyball these last three matches,” Head Coach Nicole Lantagne Welch said. “We have improved a lot this year, and we want it to continue and help us go get third place. We are also striving to lead the conference in three statistical categories.”

Within conference play, the Gauchos are first in digs per set (15.59) and second in both blocks (2.24) and aces (1.73) per set, giving them a serious chance to fulfill Coach Lantagne Welch’s wishes to finish atop the conference in all three categories.

Doing so will require strong performances from every player that dons a UCSB uniform this weekend but especially the team’s middle blockers.

“We are looking for Nicole [Omwanghe], Charlie [Robinson] and Chloe [Allen] to make a strong impact in the front row,” Lantagne Welch said. “We want to serve tough all weekend [as well].”

UCSB will strive to achieve each of its goals when it faces Cal State Fullerton on Friday and UC Riverside on Saturday as part of its season-ending three-game road trip. Santa Barbara leaves with a 7-18 overall and 6-7 Big West mark, good for fifth in the conference.

Road trips have been something of a struggle for the Gauchos this year, who are 1-7 this season when playing outside of the Thunderdome or Rob Gym.
UCSB’s most recent road match at Cal Poly was another loss, but Lantagne Welch saw plenty of improvement nonetheless.

“Our last road match could quite possibly be our best match of the year,” she said. “I think we solved [our road struggles] on the last road trip and take that same preparation into these games.”

The sophomore has had an amazing season, and she currently leads the nation and Big West in kills per set (5.78), while also leading the conference in points per set (6.33).
Her 462 kills are the most in the conference and rank 13th in the nation.

After a week of play in which she recorded a .331 hitting clip along with averaging 2.22 digs and 0.67 blocks per set, Ruddins was awarded her third Big West Women’s Volleyball Player of the Week honor this season.

In addition to the offense Ruddins brings, the fact that UCSB will be facing the worst two teams in the Big West this weekend certainly won’t hurt either.

Both Fullerton and Riverside have just one win in conference play this year, and both wins came at the other’s expense.

At the same time, the Gauchos can’t afford to get overconfident. It’s been a few weeks since UCSB has seen either team, so there’s still plenty of time to improve and prepare for the rematch.

“Our team will have the confidence, but at the same time we need to respect our opponents and realize that they have improved and to expect it to be much tougher this time around,” Lantagne Welch said.

Much like UCSB, the Fullerton offense is mostly built around one attacker.

In the Titans’ case, that’s junior outside hitter Madeline Schneider. Schneider has 317 kills on a 3.30 kill per set pace; the Gauchos managed to hold her to just five kills back on Sept. 23.

A repeat of that defensive performance will go a long way toward securing a UCSB win on Friday night. Avoiding middle blockers Aniya Henry (71 blocks) and Summer Kerins (68 blocks) would be similarly helpful.

Against UC Riverside, the Gauchos’ attention will be more dispersed in response to the Highlanders’ more balanced attack. Junior outside hitter Ahuna Kaiulani leads Riverside in kills with 226, but she’s not far ahead of the other five Highlanders boasting triple-digit kills.

Junior setter Chelsea Doyle has handled the majority of the facilitating work for Riverside with her 860 assists, but her 251 kills and 18 service aces, both second on the team, have been important for the Highlanders as well.

The Gauchos are still in striking distance from the third-place spot on the end-of-the-year Big West podium, but securing their spot will likely require an impeccable close to the season. That process starts on Friday in Fullerton.