Originating from eastern Asia and introduced to Long Beach Harbor in 2003, the invasive alga Sargassum horneri has established itself in Southern California marine systems, including those in the Channel Islands along the coast of Santa Barbara.

Although it was initially documented at Anacapa Island in 2009, S. horneri did not increase in abundance until 2013 under warm water conditions. During their long-term monitoring of kelp forests around the Northern Channel Islands since 2000, researchers in the UCSB Marine Science Institute (MSI) tracked the invasive alga’s growth patterns both within and outside of marine protected areas (MPAs) to better understand the potential of MPAs to resist invasions. Their observational findings have been published in the journal Ecological Letters.

“Our study concluded two different ecological mechanisms for resistance, competition and herbivory, but they are generated from very different ecosystem states — one a healthy, pristine kelp forest and the other a depoverate urchin barren,” Jennifer Caselle, lead author and research biologist at the MSI, said.

At Anacapa Island is an older MPA where fishing has been banned since 1978. Close by are two newer MPAs established in 2003, one closed to fishing and the other open to restricted fishing of California spiny lobsters and pelagic finfish. The third area the researchers tracked was the reference zone, an area open to all fishing.

“We noticed that in the old MPA, which is a beautiful, lush kelp forest with lots of native algae, we did not see S. horneri. In the fished areas, which are dominated by urchins, we also did not see any S. horneri. So this was really interesting to us,” Caselle said.

According to Caselle, the old MPA contains a large number of the top predators in the system, California sheephead and California spiny lobsters. They prey on sea urchins, which, in turn, eat algae. The small amount of urchins consequently created an abundance of native algae.

“We think that the S. horneri couldn’t get a foothold [in the old MPA because of competition with the native algae for space on the substrate and for light, which the algae need to grow. So the healthy system with all the native algae is covering the bottom, not letting S. horneri settle, and they’re shading, blocking light,” Caselle said.

On the other hand, the reference zone experienced serious overfishing. With very few spiny lobsters and California sheephead, urchins dominated this marine system, creating what is known as an “urchin barren.” Because the urchins feed on both native and invasive algae, S. horneri was unsuccessful in creating a strong presence in the reference zone. 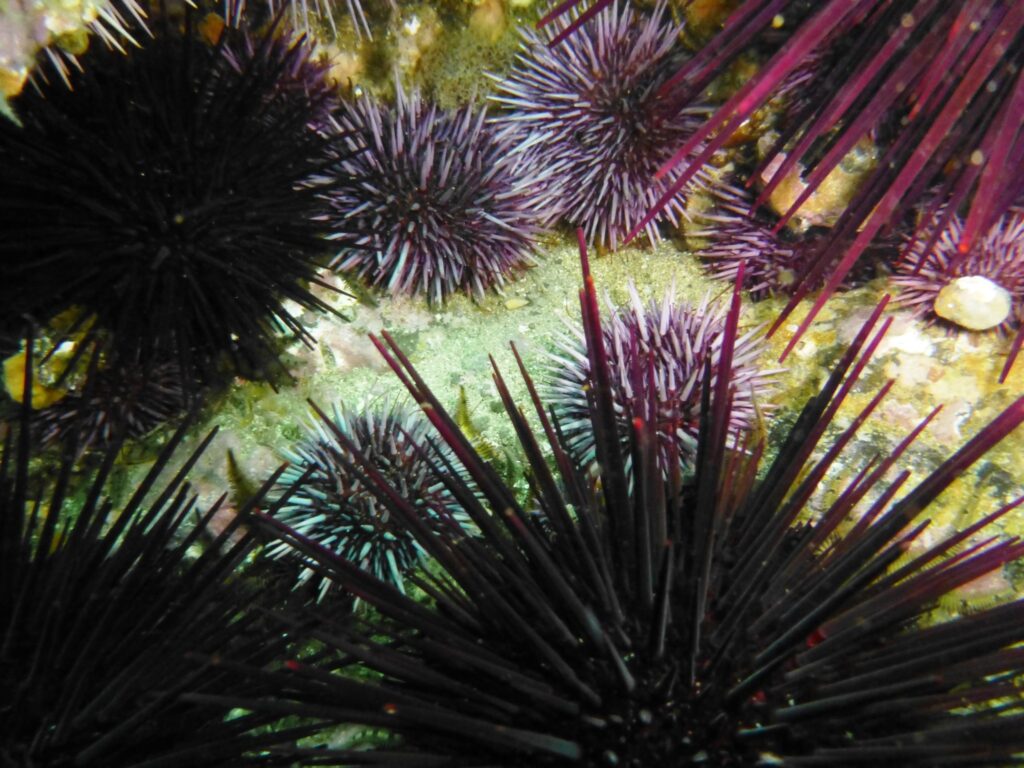 The picture above shows purple urchins and red urchins which are the major herbivores in the system. / Courtesy of Katie Davis

In the newer reserves, Caselle and her research team discovered the highest density of S. horneri.

The research yielded several implications, including the basic finding that the two different ecosystem states, the healthy kelp forest and the non-healthy urchin barren, both suppress invasions.

The other more “real-world” implication, Caselle said, relates to kelp restoration projects in which people have tried restoring kelp beds by removing sea urchins. “This study clearly shows that you have to be really careful with that because removing urchins could allow invaders to come in as easily as kelp coming in. You have to think very carefully about the timing of settlement and the life history of the organisms you are trying to restore before you think about restoring reefs by removing herbivores.”

Having analyzed the observational patterns, Caselle plans to move forward with conducting experimental studies on the rocky reefs, such as by manipulating the herbivores and, if possible, the predators. She said, “We envision potentially removing urchins, caging them out of areas and seeing what type of algae comes in. In the meantime, we also want to do some feeding experiments to understand better which sorts of algae the urchins prefer.”

Caselle highly credits the MSI’s long-term monitoring program for the observational data collected in her paper.

“Many people think that monitoring isn’t very ‘sexy’ science to do, but it’s the only way we would have discovered these patterns,” she said. “The data sets, especially in the Channel Islands, are getting hugely valuable. They’re not that exciting, but it is when you can finally do something with the data.