After the 2014 bill that required all California businesses to recycle their organic waste, EAB is now encouraging I.V. businesses to compost their pre-consumer waste. All businesses will have to join the program by 2019. Zach Mendez / Daily Nexus

The campaign’s goal is for all restaurants in I.V. to compost pre-consumer waste, which includes food items the consumer never touches like banana peels and strawberry leaves. The campaign is one of three Environmental Affairs Board (EAB) is running this year.

Marborg, the same company that collects the trash in Santa Barbara County, would pick up the items and send them to a composting facility.

According to the CalRecycle webpage, organic waste includes food waste, green waste, landscape and pruning waste, nonhazardous wood waste and food-soiled paper waste that is mixed in with food waste.

“The county wants to oblige as much as possible because it’s a law  but also for moral reasons … [T]hey’ve been working to enroll as many companies as possible into the program,” D’Souza said.

According to D’Souza, the law did not set any rules for enforcement, leaving many I.V. businesses to consider it a financial burden to recycle the waste and ultimately choosing not to do so.

According to D’Souza, the price for picking up the compost is $50 a month for two weekly pick-ups. Each pick-up is up to four cubic yards of compost.

She believes the cost would even out financially because less waste would be going into the trash, which would decrease trash pickup costs. She also thinks restaurants would benefit their image, as many students choose to support sustainable practices.

The County of Santa Barbara has created lessismore.org to promote business composting by providing information about the food waste collection service, guidelines on what can be composted and tips to reduce food waste.

According to CalRecycle’s webpage, jurisdictions can implement provisions for enforcement, including a structure for fines, but none are yet in place.

By law, all businesses should be part of the program by 2019, but whether or not this happens depends on California’s enforcement , D’Souza said. As of now, there are no state officials checking to see if businesses are implementing this, she said.

D’Souza said the methane that food waste creates in a landfill is worse than carbon dioxide, which is why EAB is pushing businesses to properly dispose of their waste.

The previous method to push businesses in I.V. to join the campaign was to spread information about the project to various businesses. This year, they changed their approach to include the economic incentive to join rather than just moral and environmental reasons.

Buddha Bowls, Sorriso’s, HiWi Tropical Fusion and The Loft joined the program last year, D’Souza said. The I.V. Food Cooperative joined this year and recently established a bin for residents to put their compostable waste into as well, according to D’Souza. 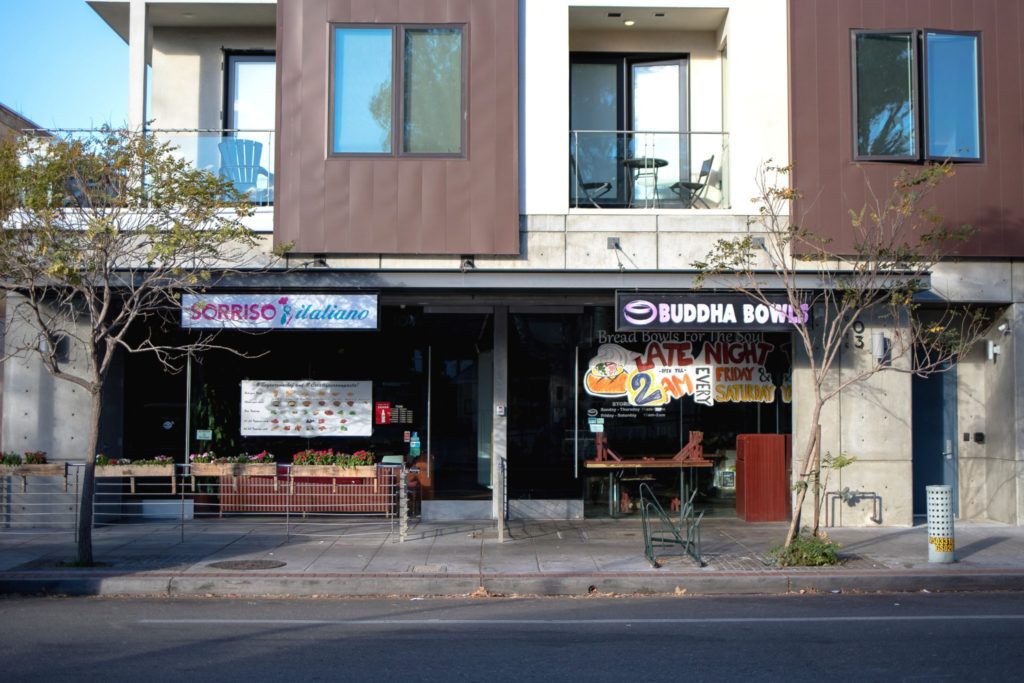 HiWi manager, Nareh Shanazarian, said they have been composting since they opened in January 2017, but they have yet to see composting take off in the area.

Shanazarian said as an additional service, composting does add an additional monthly cost to the business but that it does not affect employee wages or food costs and they keep their prices as low as possible.

According to D’Souza, Caje is currently interested in joining the program while Freebirds is against joining because they do not create very much food waste. Starbucks manager Nikolett Punzalan said the coffee shop is open to joining the program if it receives more information.

This mandate is one of the many ways California is trying to be an environmental world leader, according to D’Souza.

With the federal government rolling back various environmental protections, she said California has many other issues to address and that this is something she hopes businesses will choose to follow.

For clarity – the Isla Vista Food Co-op has been composting for over 40 years. We have rolled out a customer compost bin as a pilot project for our community. Last year our local farmer that takes our compost hauled over 2,000 gallons of fruit and veg away to feed his worms. The community compost bin is a test run to see if we can handle more waste. This is most definitely not the first year that we have begun composting, and are very proud of the years of work that we’ve done to help local growers access vermicompost made… Read more »