The Daily Nexus
News
UCSB Professors, Community Look Back on Trump’s First Year in Office
November 9, 2017 at 12:04 am by Maura Fox

On the anniversary of the 2016 presidential election, UC Santa Barbara faculty and staff gathered in Corwin Pavilion to reflect on Donald Trump’s first year as president. 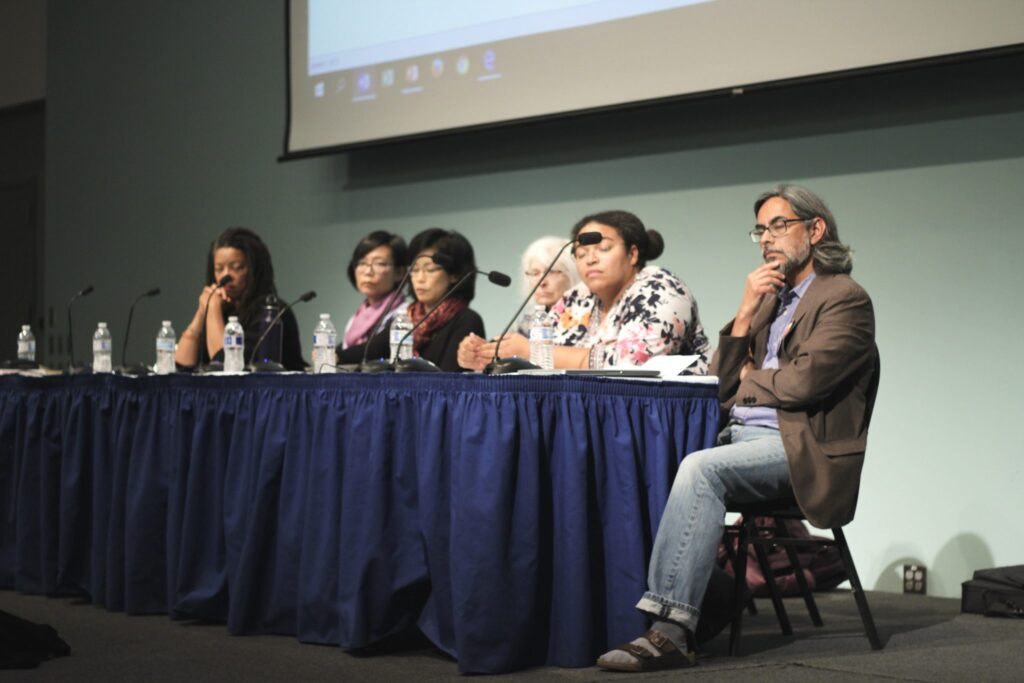 Approximately 100 students, faculty and community members settled in the room Wednesday evening to listen to seven faculty panelists and ask questions about the political and social climate.

“This past year was even worse than I initially thought it would be — and I’m a pessimist,” said Lisa Park, professor and chair of the department of Asian-American studies.

The university hosted a similar event last November after the Associated Students funded $5,000 to the College Republicans to host conservative speaker Ben Shapiro.

Margaret Klawunn, who was one of the organizers of last year’s faculty forum, said the university wanted to continue last year’s dialogue and discuss the “divisive” politics in the U.S. today.

The panelists shared their thoughts about how the Trump presidency has bolstered racist and sexist rhetoric throughout the nation, as well as the way it has marginalized minority communities.

“How do you have a continual resistance against the ‘bully-in-chief’?” asked Eileen Boris, professor of feminist studies, citing Trump’s hostile rhetoric against women and the transgender community.

Boris said Trump was elected because liberal voters did not hold Democratic leaders accountable through continued advocacy for social change during the Obama administration.

She warned voters to avoid becoming complacent in Santa Barbara, where the majority of the political leaders are Democrats.

“Even when we have our first Latino mayor and progressives [in Santa Barbara], we have to be there putting pressure,” Boris said. “That’s one of the lessons of history.”

While the panelists expressed how disheartened they felt throughout the past year, they also encouraged students to seek out spaces to communicate with one another to resist the president’s policies.

“We need each other desperately,” Park said. “We all belong here, every one of us. We have to celebrate like we own the place — because we do.”

“We are many, and they are few,” added Ralph Armbruster-Sandoval, professor of Chican@ studies.

Eric Smith, professor of political science, told the Nexus on Tuesday that the national pushback and activism in response to the Trump administration is similar to the state of the nation in the 1960s during the Vietnam War.

He explained that the U.S. must have a two-party political system in order to maintain balance. He said, however, the polarization between liberal and conservative Americans grew stronger during the presidential election campaign.

Smith noted the way the UCSB campus has experienced its own polarization in the past few years and encouraged the university to host more events that bridge the divide between liberal and conservative students.

Smith added, however, that there has been destructive actions on both sides. College Republicans’ signs announcing Ben Shapiro were vandalized with spray paint in February.

“The majority of the campus is liberal on social issues,” Smith said. “Conservatives are feeling attacked and because of that, they’re afraid to speak out in public.”

In April 2016, controversial pro-Trump graffiti was written in chalk on the ground near the North Hall mural and South Hall, which holds the Department of Chicana and Chicano Studies.

“If they felt more comfortable speaking up, there would be less of [those] personal attacks,” Smith said.

Klawunn told the Nexus on Wednesday that since the election, the university has mobilized efforts to create more spaces for students to discuss controversial issues.

The UCSB chapter of Young Americans for Liberty began hosting events in the Hub in the UCen to open the dialogue on campus about oftentimes controversial topics. In October, the group organized a debate on free speech in relation to extremist groups.

The group also organized a discussion on the ethics of abortion on Wednesday, Nov. 8.

Klawunn said the university plans to hold another forum about free speech during Winter Quarter to encourage students on both sides of the issue to voice their opinions.

“We’re going to continue to have different opportunities,” Klawunn said. “Each opportunity can’t do everything but we hope we’ll offer a lot of different perspectives.”

Vilna Bashi Treitler, professor and chair of the black studies department, said at the forum that she feels “optimistic” about the future because she has seen the way Americans have mobilized in response to the Trump administration.

“Oppression and dominance have been with us and may always be with us,” Treitler said. “We get knocked down but we can get back up again.”

After the forum, the event moved to Storke Plaza, where attendees held blue LED lights and listened to the Chumash Inter-tribal Singers perform songs of survival and resilience.

A version of this article appeared on p.4 of the Nov. 9 print edition of the Daily Nexus.

Trump was not an aberration, but rather the logical result of decades of bipartisan political rot.

Sadly, Eileen Boris et al. would have been perfectly happy with war criminal Hillary Clinton in the White House.

They wax eloquent about racism and attacks on minorities, but eagerly supported a candidate who played an integral role in promoting death and destruction in North Africa and the Middle East.

Those ships full of black and brown refugees sinking in the Mediterranean have Clinton’s bloody fingerprints all over them.