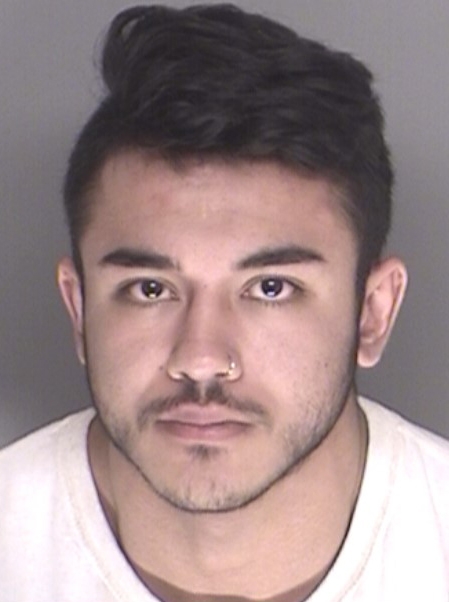 A UC Santa Barbara student was arrested after allegedly jumping onto moving vehicles after fleeing from law enforcement on Thursday in Isla Vista, the Santa Barbara Sheriff’s Office (SBSO) reported.

Law enforcement identified Jeremy Jameel Kim, a 19-year-old male UCSB student, as the suspect in three separate crimes that occurred within one hour at 1:50 a.m., according to Kelly Hoover, SBSO spokesperson.

Hoover said she cannot confirm whether the subject had been using drugs, and the incident is under investigation.

Sheriff and UCPD officers who work in the Isla Vista Foot Patrol (IVFP) arrested Kim later that morning after he committed three crimes, ran away from law enforcement and resisted arrest.

Kim was booked into the Santa Barbara County Jail on multiple charges, including robbery, battery, malicious mischief to a vehicle, challenging to fight and resisting arrest, according to Hoover. His bail is set at $50,000.

IVFP officers responded to a call reporting a robbery on the 700 block of Camino Del Sur at 12:40 a.m.

A victim was walking near Camino Del Sur and Abrego Road when a college-aged Asian male “scream[ed] aggressively” at the victim, Hoover said.

According to Hoover, the victim at first ignored the suspect who then walked up behind the victim, grabbed his arm and forcibly stole his cell phone.

The suspect then ran north on Camino Del Sur. The victim chased after the suspect in an attempt to get his phone back.

The suspect eventually stopped running and turned to face the victim. He then removed his shirt, set the victim’s cell phone on the ground and took a fighting stance, Hoover said.

The victim asked a passerby to call the police, at which point the suspect immediately put his shirt back on and ran, leaving the victim’s cell phone on the ground.

One hour later at approximately 1:50 a.m., IVFP responded to a report of an Asian male “acting strangely and jumping onto vehicles” on Camino Del Sur and Abrego Road.

When IVFP officers arrived at the scene, they found a 19-year-old UCSB student in the street, later identified as Kim. Kim was shirtless, extremely sweaty and had several small lacerations on his body, Hoover said.

He was “uncooperative” and fled when confronted by law enforcement, Hoover said.

According to Hoover, Kim tried to aggressively open a male driver’s car door on Sueno Road while the victim was attempting to parallel park, but the door was locked.

Kim banged on the driver’s door while yelling and tried to open it, Hoover said.

He then jumped on the vehicle and refused to get down. The victim accelerated down Sueno Road with Kim on top of the vehicle and made a sharp turn onto Camino Pescadero, causing Kim to fall and land on the street.

Kim immediately ran northbound on Camino Pescadero, according to Hoover. The victim then called 911.

A third female victim said she was walking down the street when Kim tackled her onto the ground “for no apparent reason” causing her to injure her head, Hoover said.

Officers later found Kim at the intersection of Camino Pescadero and Cordoba Road. Kim continued to be “resistive” but was eventually taken into custody, Hoover said.

Law enforcement later identified Kim as the suspect after a follow-up investigation showed he was responsible for three separate crimes within the past hour in I.V., including the Camino Del Sur robbery.

When that molly hit too hard