The Daily Nexus
Sports
A Triumph at Harder: Gauchos Upset by UCR in First Round
November 3, 2017 at 6:01 pm by Richard Benites 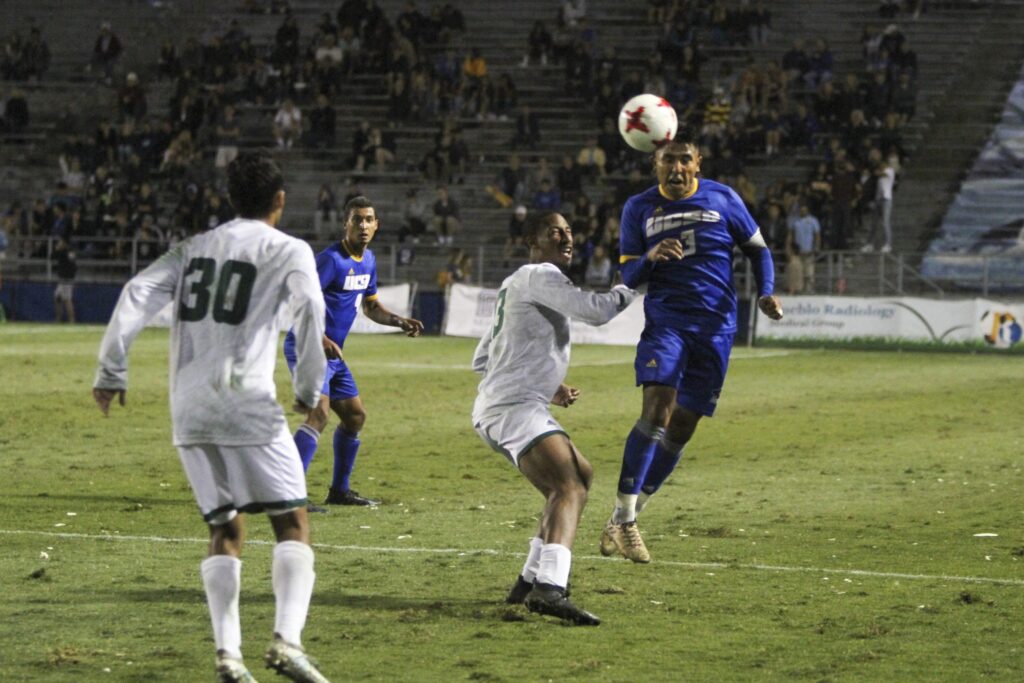 Playing host to UC Riverside in the Big West quarterfinals, the UCSB men’s soccer team was the clear favorite going into the Wednesday night matchup.

But the Highlanders had different plans in mind.

In the match’s 87th minute, tied 0-0, it seemed like overtime was just on the horizon. But a stray throw-in turned into the only chance needed to win this game. The score was by UC Riverside’s Eduardo Sanchez, and it ultimately granted the Highlanders a 1-0 first round victory that eliminated the Gauchos from their postseason aspirations.

It was a tough 90 minutes of regulation to watch, and the final three minutes were even harder. After a game that was mostly dominated by a Gaucho offense, the Highlander defense proved too stingy to allow any more than several shots on goal.

Ultimately, no Gaucho attempts hit the back of the net and all Riverside needed was one in order to shock their opponents; and that they did as their window of opportunity presented itself in the 87th minute of play.

Thus, the men’s soccer season has now come to a conclusion. Besides a foul ridden game and countless rotational substitutions, not much went for either team throughout the entire match.

The first save of the night came fairly early as Gaucho freshman forward Sahid Conteh landed a sweeping shot that was covered by Highlander goalkeeper Vincent Morales. UCSB’s following shot was even closer than the previous as a well placed header by midfielder Joseph Ammer collided with the post in the 13th minute. For the rest of the first half the Gauchos dominated the majority of possession, but without another key opportunity it remained quiet and scoreless.

Following the second whistle signaling the second half start, a combined 19 substitutions were made during play as both head coaches sought after any switch that may tip the balance of the game in their favor. Soon after, it was Sanchez’ score that sent UCSB’s ‘Soccer Heaven’ into a state of shock as the Gauchos fell victim to an early round exit.

Harder Stadium was gloomy as the game-winning goal took the breath out of everyone and the final whistle sounded. Exhausted Gaucho players fell on top of the pitch as the Highlanders celebrated their biggest upset of the year.

The severity of the loss was evident as Head Coach Tim Vom Steeg spoke to his team on the field rather than in the locker room.

“We’ve had a trying and challenging season with lots of issues, going all the way back to Kevin [Feucht] getting hurt … so we’ve been playing catch up all year,” he said. “We went the first six games scoring three goals, the first three games scoring no goals, and ironically we ended the season just how we started it.”

The coach’s words rang true as the Gauchos lack of offense decided not only the result of the postseason match, but several others throughout the year. Regardless of controlling the rhythm of games and minimizing opponents’ time of possession, the Gauchos just seemed to be missing that playmaking ability in the final third of their season.

“Tonight, we were getting close but frankly I got nothing from my bench tonight. No one came off the bench tonight and helped us, and that was my biggest disappointment,” Vom Steeg said.

The Gauchos’ head coach would then go on and mention the importance of finding some bench production within their current 27-man roster. Altogether, hopes still remain high for this young and very talented UCSB roster.

Perhaps in the offseason, the team will work on adding the playmakers required in order to add to their future season’s total goal tally. For now, the Gauchos must put this loss behind them and focus on developing their star underclassmen as they shape the future of the UCSB men’s soccer program.