The Daily Nexus
Water Polo
‘Chos Host Senior Day Match Against No. 5 Pacific in Hopes of Capturing 1st Conf. Victory
November 2, 2017 at 5:02 am by Calvin Thrift 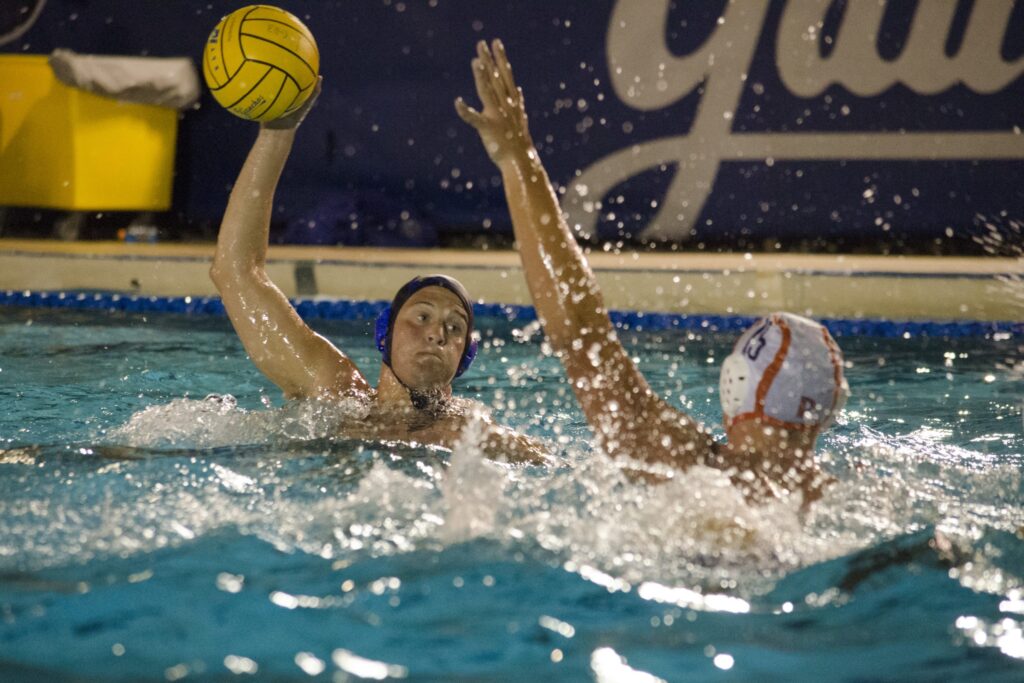 Blocked by a defender, Ivan Gvozdanovic aims for the goal. Christina DeMarzo/Daily Nexus

The UCSB men’s water polo team will have its hands full Friday night when it hosts the University of Pacific, a team that has only lost a total of four games this season, at Campus Pool.

Following last week’s loss, the Gauchos have dipped below .500, now holding a 9-10 record overall and a record of 0-3 in the Gold Coast Conference (GCC). Santa Barbara remains nationally ranked at No. 10, while Pacific is still above the Gauchos with a No. 5 spot in the country.

The Tigers have had an impressive season this year, having only lost to Cal, Stanford and twice to UCLA. They have been lucky enough to not face the No. 1 team in the nation yet; however, they will take on USC at home next week.

Pacific has earned its spot at No. 5 in the country, holding a record of 14-4 overall and a GCC undefeated record of 3-0.

While Friday’s matchup will indeed be a game between the first and last-place teams in the GCC, it doesn’t feel like it. That can largely be attributed to the strange way UCSB suddenly went into a slump.

Without two of their best players in sophomore utility Ivan Gvozdanovic and junior driver Boris Jovanovic, the Gauchos have had to make considerable adjustments offensively and defensively.

In response, the young Santa Barbara roster has been forced into action, which has definitely shown throughout their five-game slide, but the Gauchos have impressed their coaching staff in showing resilience as well as improvement.

Although they lost a close match against Irvine in their last game, the Gauchos’ energy seemed to have returned, as they put together a comeback effort and rallied behind senior attacker Shane Hauschild.

On the season, Hauschild has been one of the only bright spots, especially as of late, leading the team in almost all categories: steals (25), goals (28), points (42) and assists (14).

Even though Hauschild recorded five total goals against Irvine, he can’t be expected to put up the same numbers against a better Pacific team, at least not without more help from his teammates.

Granted, the sudden absence of Gvozdanovic and Jovanovic, two relied-on scorers, would throw a wrench into any program’s game plan, but the Gauchos have the weapons capable of making up for the lost production.

Freshmen attackers Cole Brosnan and Jesse Morrison, in addition to redshirt freshman Adam Lott, have been part of the young supporting cast for the Gauchos, but they will still have to find a way to contribute more in order to take on the Tigers.

With the Serbian duo out, senior utility Reed Cotterill has shown glimpses of last season, during which he was selected to the GCC All-Tournament Team.

Cotterill, coming from Australia, likely has more of a green light in terms of looking to score if the Gauchos remain without their two former goal-leaders.

An obstacle for UCSB this season has been a difficult schedule, but the Gauchos are familiar with playing the top programs in the country on a weekly basis.

Despite their recent struggles, the Gauchos can find hope in the fact that Pepperdine last year ended up winning the GCC tournament while doing poorly during the season.

If Hauschild and Cotterill bring the same energy to the pool that they brought against Irvine, the young supporting cast of Gauchos will likely be able to rally around their talented seniors and should, in turn, have a shot at the upset.

Cotterill, specifically, will aim to take some of the load off Hauschild early on, as the Tigers will likely prepare to stop the man who had a hat trick within the first quarter last game.

Pacific, coming off a close loss on the road against UCLA, will look to regroup before playing Santa Barbara.

The UCSB coaching staff will have a difficult time preparing to stop the Tigers, as the Tigers’ offense is decently dispersed through a handful of scorers.

In just three conference games, the Tigers have put up 37 total goals from nine different players, whereas the Gauchos have scored just 21 goals during the same number of conference games.

A standout for Pacific, in particular, is redshirt sophomore Luke Pavillard. The Australian native has scored 52 goals overall on the season while also contributing 24 assists.

Pacific showed in its most recent game that it can score rapidly and sporadically, as the Tigers posted a 6-1 fourth quarter in a comeback effort that would ultimately fall short against the Bruins. While Pacific will clearly want to utilize its offensive power, UCSB will have to do its best to contain any rapid scoring by the Tigers.

The Gauchos will probably turn to a slower, more methodical game relying on key defensive stops in order to match up with the No. 5 team in the nation.

The action will begin at Campus Pool on Friday, Nov. 3, at 7 p.m. at the No. 10 Gauchos look to get their first conference win of the season over the No. 5 University of Pacific.