In Friday’s home matchup between the No. 10 UCSB men’s water polo team and the No. 6 Anteaters, the Gauchos failed in their exciting comeback effort ultimately falling short to their conference rival, 10-9.

For Santa Barbara, Friday’s loss comes at a bad time as the team has now lost five in a row falling to 9-10 overall with a 0-3 Golden Coast record.

UC Irvine improved to 11-7 at the time of the victory but following a loss to Stanford on Sunday, it is now 11-8 on the year with a 2-1 conference record.

The first quarter of action featured UCSB’s senior attacker Shane Hauschild scoring a hat trick with three consecutive goals. UCI’s Fynn Schuetze, a 6’7 freshman from Germany, answered Hauschild’s first goal with a goal of his own off the power play to make it 1-1 with 6:50 to go.

The Anteaters would get their second goal of the quarter from senior Kyle Trush, exchanging goals with Hauschild again to keep the score even, 2-2.

With 2:19 remaining, Hauschild sniped a goal from the top of the key to give the Gauchos the 3-2 advantage heading into the second quarter.

The second quarter turned out being much more one-sided, with the Gauchos failing to score. Both sides had troubles finding the net for the better half of the quarter, but UCI finally scored off of Antoine Lena’s finish off a lob. 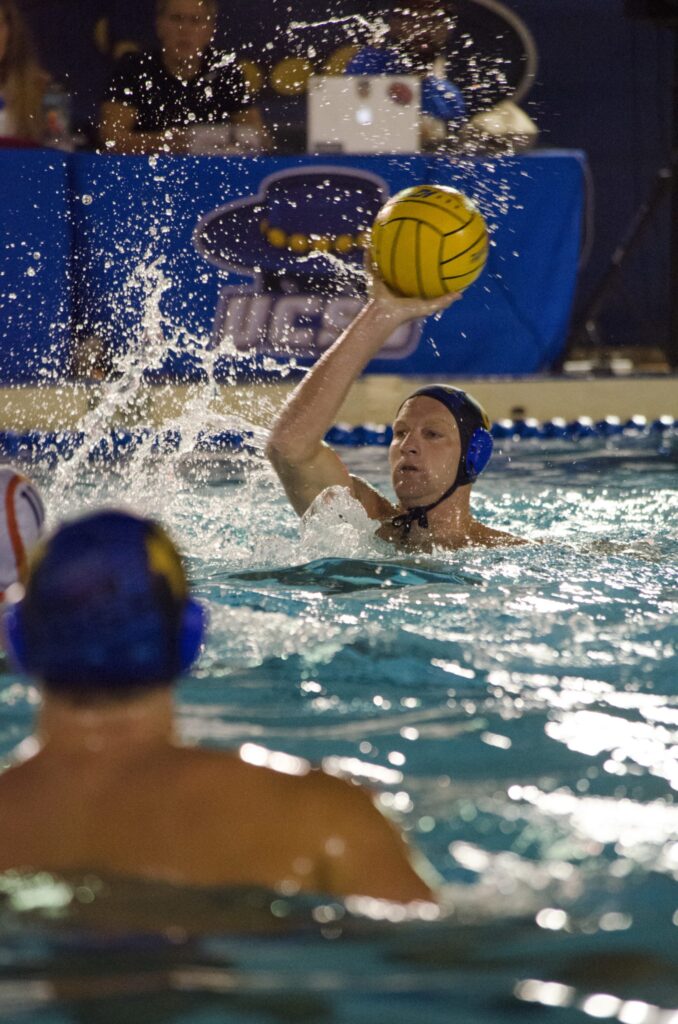 With the game tied 3-3 with 3:50 remaining in the first half, the Anteaters didn’t slow down.

With 2:32 remaining, Irvine scored again from a lob, this time Jon Polos finishing the play to give the road team the 4-3 lead. Jack Trush, Kyle Trush’s brother, scored for UCI with 1:56 to go, burying the Gauchos 5-3 for the first half of play.

To start the second half, tensions rose after a few controversial calls and non-calls. This would show throughout the second half, as players would be ubiquitously tangled up with each other as they moved down the pool.

At 6:21 in the quarter, Hauschild scored his fourth goal of the day with another strong shot from the top of the key to put the Gauchos within a goal. The Santa Barbara native seemed to be proving something during Friday’s contest, perhaps having his best game of the year but even more importantly driving the Gauchos’ attitude.

With just under four minutes remaining, Kyle Trush added a goal for the Anteaters, giving them the advantage 6-4. Irvine’s scoring would continue to come in bunches, with the freshman Schuetze scoring at 2:11 to put the Anteaters up 7-4.

Following an odd series of calls from the referees, Irvine’s Jack Trush was able to score with 21 seconds left. With the clock winding down, UCSB’s Cole Brosnan got the ball and made a nice move to score at the buzzer.

Heading into the final 8 minutes, Irvine held an 8-6 advantage. A goal by sophomore attacker Jacob Halle at 5:52 in the quarter made it 8-7. Following Halle’s goal, the game featured minutes of rough fouls and the crowd giving the referees some advice and it looked like the chaos was helping neither side.

Finally, at 2:40 to go, Kyle Trush converted to give the Anteaters the 9-7 lead.

A penalty shot from Shane Hauschild with 2:16 left gave Hauschild his 5th goal of the day and moved the Gauchos within one.

With 1:22 remaining and only down one, Reed Cotterill finessed an over the shoulder shot from set to tie the game 9-9. The senior added the exclamation point by facing the crowd and pumping his fist, giving the Gauchos momentum and a comeback hope.

A focused defensive stand by UCSB ended in a deflating goal by Irvine’s Lovre Milos to give the Anteaters the 10-9 lead with 34 seconds remaining.

The Gauchos couldn’t come up with a tying goal in their last possession, giving Irvine the victory.

Justyn Barrios had another big day in the cage, despite being scored on ten times, as he had 11 saves. A few of those saves were one-on-one with an opposing player when the sophomore goalkeeper came up huge for the Gauchos in preventing the score from getting out of hand.

For a young UCSB team that’s still without two of its best players, the loss can’t be too much of a surprise or even a deterrent. Last year’s Gold Coast Conference championship was won by Pepperdine, a 4th seed in the tournament, so the Gauchos have opportunities remaining.

“We know there are hard games down the stretch, and I think this game showed any of these games you can come in and win. Whether we win or lose these games, we just want to be playing well,” Head Coach Wolf Wigo said, “I thought we played well.”

Although it still has a chance for postseason glory, this is the UCSB team that has now lost 5 straight. With or without their two better players of Ivan Gvozdanovic and Boris Jovanovic, the Gauchos will have to make some quick adjustments.

The Gauchos haven’t been too far off, as they’ve shown signs of dominance earlier in the season. UCSB has a considerably young roster and so obviously the consistency that comes with a mature team hasn’t been prominent late in the season, but Friday’s tightly-contested matchup with Irvine showed promise for UCSB’s developing players.

“We fought back a couple times and I was really proud of the effort of the guys,” Wigo noted, “a lot of the younger guys played some great minutes.”

They’ll just have to channel that energy and follow the leadership of Shane Hauschild as they prepare to play their final games of the regular season.

UCSB’s penultimate match will be at 7 p.m. on Friday, November 3 against Pacific at Campus Pool.