The Daily Nexus
Sports
‘Chos Aim to End Season on a Positive Note vs Blue-Green Rival
October 26, 2017 at 5:05 am by Omar Hernandez 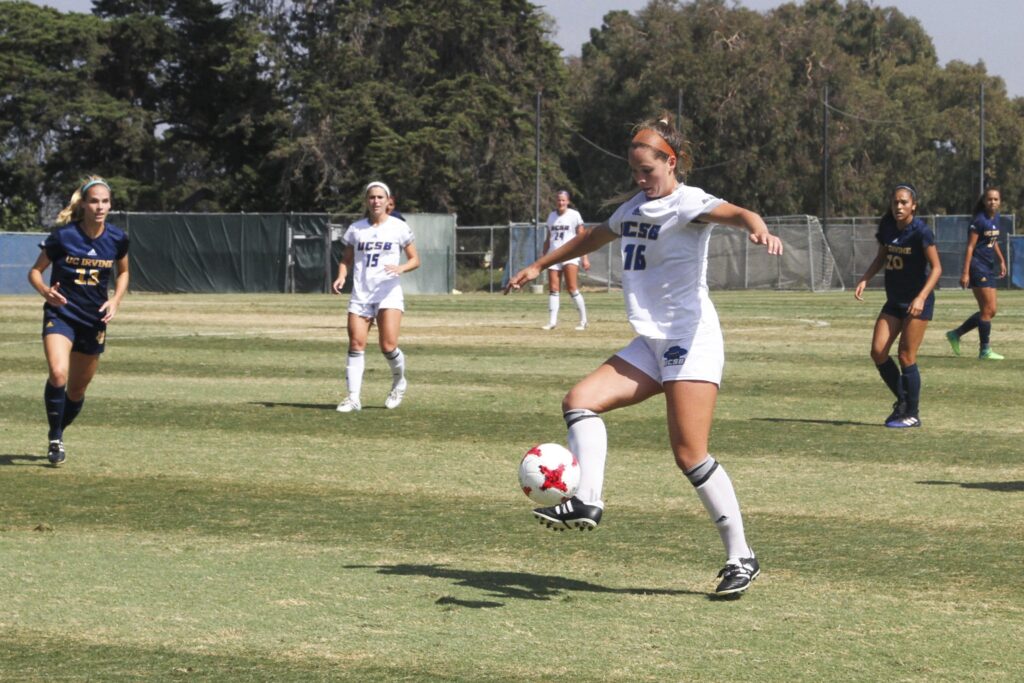 The UCSB women’s soccer team is set to take on the Cal Poly Mustangs in the latest iteration of the Blue-Green rivalry this Sunday.

The matchup between these Central Coast rivals is also the season and home finale for UCSB who will play host to its rival at Harder Stadium.

Both teams are out of playoff contention and are part of a three-way tie with Long Beach State for eighth in the Big West standings.

Santa Barbara and Cal Poly place third and fourth in the league in goals scored, with one goal separating the two at 23 and 22, respectively.

One player who has contributed to this boost in offensive production by the Gauchos is freshman Christine Maurer. Maurer is second in goals (6) and shots (41) along with being tied for third place in the Big West in goals as well.

The midfielder scored the game-winning goal against UC Davis last week and could be adding another one to her tally of netters against a Cal Poly team that is tied for second in the Big West in goals given up with 24 on the year.

This stat is both advantageous and a concern for UCSB as it is the team that the Mustangs are tied for second with.

Most notably, the Gauchos have actually tightened up on defense as of late. They haven’t allowed more than one opponent goal in their last five games while Cal Poly has given up two goals in two of its last four.

The play of UCSB’s goalkeeper, Maddie Julian, who is third in the league in goals against with only 11 so far, is certainly a big part of this recent stinginess.

It also certainly helps to have a senior defender like Kate Shoemaker in the back for better communication as well.

Communication and help on the defensive end are going to be crucial against this Cal Poly team who likes to attack individually and take lots of shots.

Although they are ranked top four in the conference in goals, the Mustangs are tied for second to last in assists (14).

Nonetheless, the Gauchos are going to need a strong ‘man-on-man’ performance, in addition to an efficient effort when providing help defense as the Mustangs thrive on opponent errors and low pressure around the top of the box.

One dimension the Gauchos will need to improve on is not falling behind early in the game. In almost all of their wins, they’ve scored first.

This goes to show that their style of play is great at retaining leads; however, their losses show that they aren’t as good at playing from behind.

Ultimately, this game still means a lot for UCSB. Although they are out of the playoff picture, they still have a chance to climb up a few spots in the standings.

Finishing the season off strong also is important for gaining motivation in the off-season and following season.

Lastly, for a few of these players, this will be their last time stepping out onto Harder Field, and an opportunity to beat the Mustangs on a day like that is one that they can only hope to capitalize upon.