The Daily Nexus
News
‘El Elotero’ Not Allowed to Sell Food on Campus Since Start of Quarter
October 19, 2017 at 12:48 am by Victoria Gurrola

UC Santa Barbara students arrived on campus at the start of Fall Quarter hoping to find Hijinio Camacho, “The Elotero,” selling elotes, raspados and mangos from his familiar blue cart in Lot 22. 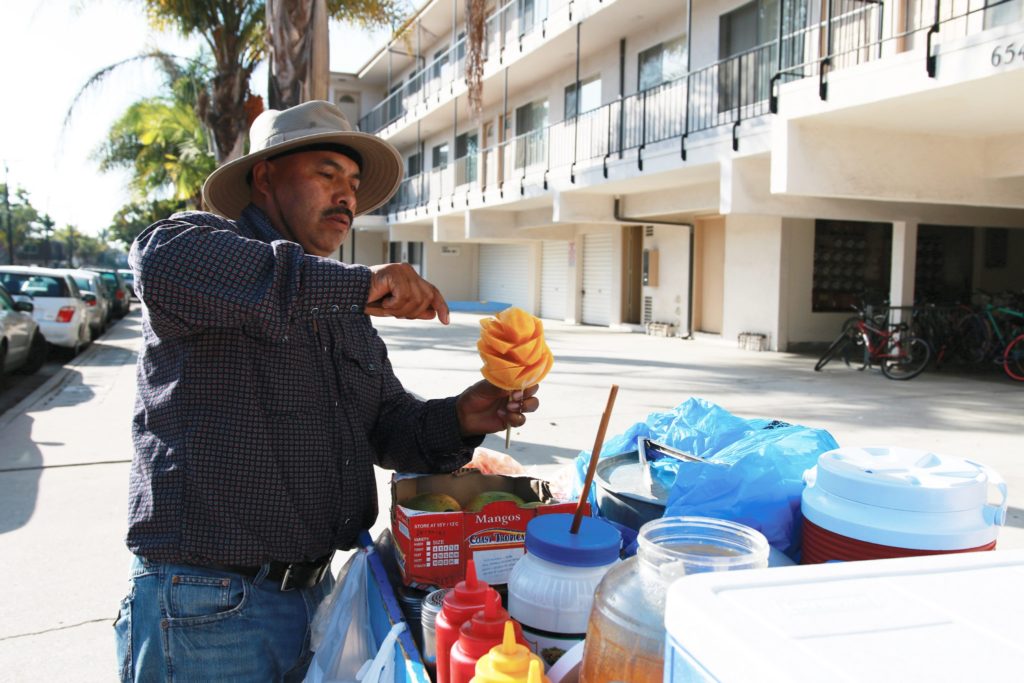 Since the first week of classes, however, the university has prohibited Camacho and other off-campus vendors from selling on campus with student organizations.

According to the Office of Student Life (OSL), the vendors’ sales violate the Environmental Health and Safety policies regarding food vendors unaffiliated with the university. OSL is only allowed to grant permits to campus organizations, not the companies and vendors who work with them.

For the past two years, off-campus vendors have been allowed to sell products alongside student organizations with permits granted by OSL.

According to Miles Ashlock, assistant dean and director of the Office of Student Life, the office wasn’t fully aware the vendors were violating university policies until a meeting on Sept. 25 with the Office of Environmental Health and Safety.

Camacho said he was notified about the policy reinforcements two days before school started. He then met with OSL on the first day of school to understand why he was no longer permitted to work with student organizations on campus.

His first event of the school year was a fundraiser with the UCSB Promise Scholars.

Camacho had planned events with Seoul’d Out, Society for Advancement of Chicanos and Native Americans in Science (SACNAS), Mujeres Unidas por Justicia, Educacion, y Revolucion, (M.U.J.E.R.) and the Latino Business Association. He started working with student organizations about two years ago and has held fundraisers with groups such as Hermanas Unidas, Raices de Mi Tierra, Alpha Phi Omega and Lambda Theta Alpha.

Every school day of this year was booked for an event, Camacho said. Student organizations would typically keep 15 percent of the profit from the shared fundraisers.

OSL, UCSB Concessions and the Office of Environmental Health and Safety are currently creating “more inclusive policies” that will lift the current restrictions surrounding off-campus vendors and allow vendors like Camacho to continue to work with student organizations.

“We really want to figure out how to add [off-campus vendor permits] to the sorts of permits we are able to approve…both because it’s a good fundraising mechanism for them but also it has been a positive contribution to our campus,” Ashlock said.

Camacho met with OSL on Tuesday and told the Nexus he now needs two more permits from the university to work with student organizations. The two permits will allow him to sell on campus either once a week or once a month.

Ashlock said the sudden policy revision further contributed to the frustration and confusion felt by both the students and the vendors because some vendors, like Camacho, already had events planned with student groups.

“I have been been really clear with every conversation with my colleagues on how important it is that we figure this out, that we figure it out quickly, but also give good and clear advice,” Ashlock said. “That’s why it’s taking a little longer.”

Camacho, who hails from Puebla, Mexico, has been selling elotes since he arrived in the United States 22 years ago. He spent time in I.V. during the early years of his time in the U.S. but found little success due to the demographic at the time.

“When I arrived [in I.V.]… two years after arriving to this country, at that time there was mainly Asians and white people. It was 10 percent Latino,” Camacho said. 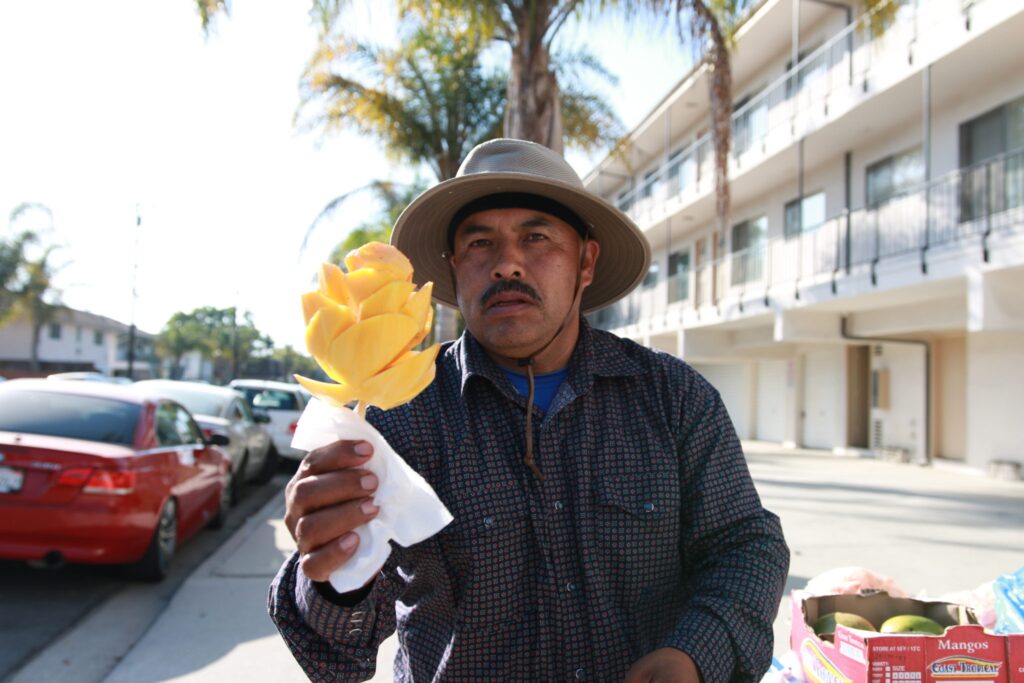 Camacho has been selling elotes since he arrived in the United States 22 years ago. Anthony Lai / Daily Nexus

Upon his return to Isla Vista two years ago, however, Camacho noticed more students of Latino descent at UCSB.

UCSB was categorized as a Hispanic Serving Institute by the Association of Colleges and Universities in 2015 and has a 28 percent Chicano/Latino population, according to the 2016-2017 campus profile published by the Office of Budget and Planning.

The rise in street food popularity over the years has opened the gates to members outside of the Latino community to indulge in Mexican snacks found on push-carts like Camacho’s.

“I’ve been looking for you for two years!” exclaimed Jacqueline Liu, a third-year global studies and psychology double major, as she approached Camacho’s cart last week. Liu said she remembers living in a Mexican community as a child and taking money from her mother’s purse so she and her brother could buy snacks from their local elotero.

With a large and increasing fan club comes busy schedules, as Camacho’s days often begin at 3 a.m. when he needs to pick up merchandise, ending at sundown when his day of selling is over.

On other days, he arrives in I.V. at around 3 p.m. and begins his route on Picasso Road at Children’s Park, making his way down Embarcadero del Norte and down Pardall Road, with a stop in front of Freebirds along the way. From there he goes to Abrego Road and circles back onto Picasso Road.

Camacho also created a Venmo account two years ago that allowed customers to buy from him without using cash. He has also made a Snapchat account with a Bitmoji character so customers can now locate him when he is in I.V. His username is “hijiniocamacho1.”

In these cities, Camacho has been stopped by the police and forced to surrender his money and merchandise, as well as been robbed by local gangs. He said street vendors like himself encounter these obstacles on a daily basis.

Recent news coverage of street vendors has made their struggles visible to the public, but it only shows a small amount of what really goes on, Camacho said.

The working conditions in the other cities pulled Camacho back to I.V. but he said even here he has faced issues with a local police officer.

“No es fácil andar en la calle [It’s not easy being on the streets],” Camacho said.

Despite the recent pause in selling on campus, Camacho said he hopes to stay in I.V. and continue to work with student organizations.

A version of this article appeared on page one of the October 19, 2017, print edition of the Daily Nexus.