The Daily Nexus
Sports
Gauchos Look to Best Sac State in Upcoming Conference Match
October 18, 2017 at 5:26 am by Richard Benites

Phew, we can all now take a breather from last Saturday’s nail-biting Blue-Green rivalry game against Cal Poly, which ultimately ended in a heated double overtime tie. Nevertheless, the UCSB men’s soccer season rolls on.

The race for seeding in the Big West standings continues to intensify. The Gauchos, who are 5-5-4 and 3-1-2, have a little leeway as they sit in second place within the conference’s North division, two points behind first and one point ahead of third.

That being said, it’s crunch time, and Santa Barbara is now four games away from either clinching a seed in the Big West Tournament or altogether missing out on the postseason party. Week 4 starts now, and how the men’s soccer team closes this year’s campaign will speak volumes for its ability to perhaps even acquire a NCAA Tournament invite when all is said and done. 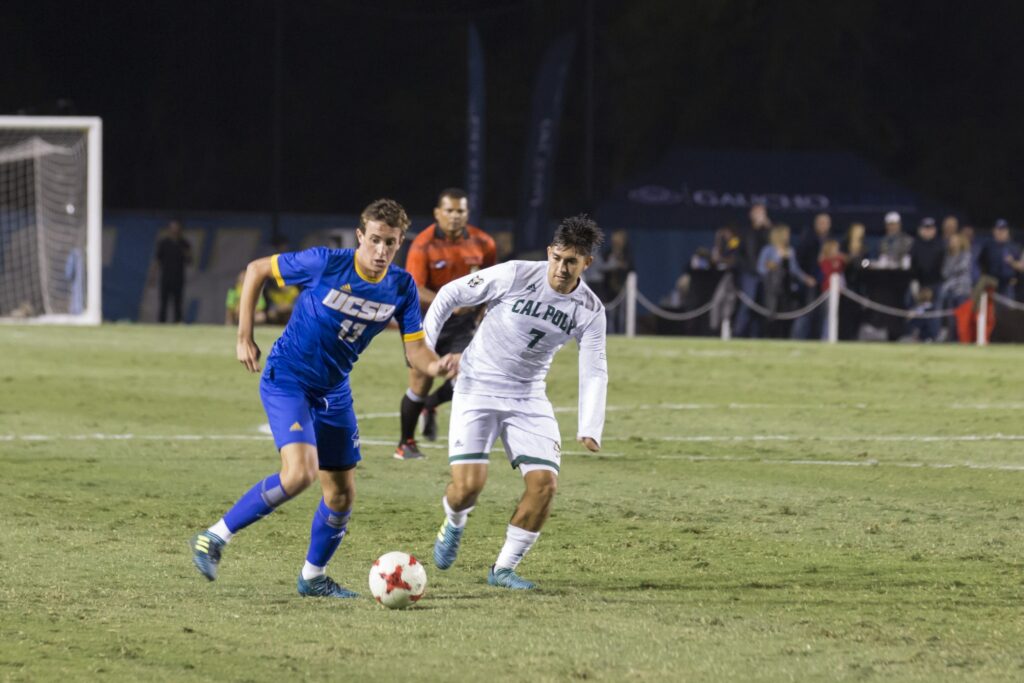 Enter Sacramento State, a North division counterpart with a 7-6-1 overall, 3-2-1 conference record. The Hornets are coming off a 2-0 loss against conference leader UC Davis.

Its record may not show it, but Sac State has been able to compete at the highest level all season long, and with its amount of wins, it finds itself at third in the Big West North.

Notably, the Gauchos are at a flat 1-1-1 record in conference road matches this season. Playing away from home has been an issue for UCSB, as it is 1-4-1 on the road, including the non-conference portion of its schedule.

Considering both teams’ history with each other, however, the Gauchos are at a very solid advantage with their all-time record versus Sac State, sitting at a favorable 13-4-3. Regardless, UCSB must not count out any of their opponents, especially due to these close standings; everyone will be pushing for a postseason spot.

Some key players for Sac State are two of their best playmakers. Both are underclassmen and forwards, beginning with Hornet freshman Justin Bedig, who has been phenomenal in the creation of plays all season long.

He leads his team in the assist category with a total of six assists on the year, not to mention a pair of goals to add to his name. Meanwhile, his sophomore peer, Christian Webb, also leads a statistical category as the team’s leading scorer with six goals on the year.

On the Gauchos’ side, freshman forward Rodney Michael still resides as one of the team’s most valuable players as he leads in both scoring and assists, with five goals and four assists.

Adding more depth to his current hot streak of performances, Michael is also second in most shots on goal in the entire Big West stat standings.

Carrillo also impressively leads the entire Big West in goals against average with a 0.96 percentage and is currently marked as second in total save percentage with a .754. Of course, part of Carrillo’s success can be attributed to the formidable defensive line he leads in front of the goal, but nonetheless, the Gauchos have been able to get the job done and will look to close out strong come Wednesday night.

The Sac State game will truly be a test of Santa Barbara’s endurance, as it will be a mid-season divisional matchup with much on the line.

Both sides bolster a young productive roster and will want to get those three coveted points that will bring them that much closer to a playoff selection seed.