The Daily Nexus
Water Polo
UCSB Upended by SJSU and Stanford Over the Weekend
October 15, 2017 at 6:33 pm by Calvin Thrift 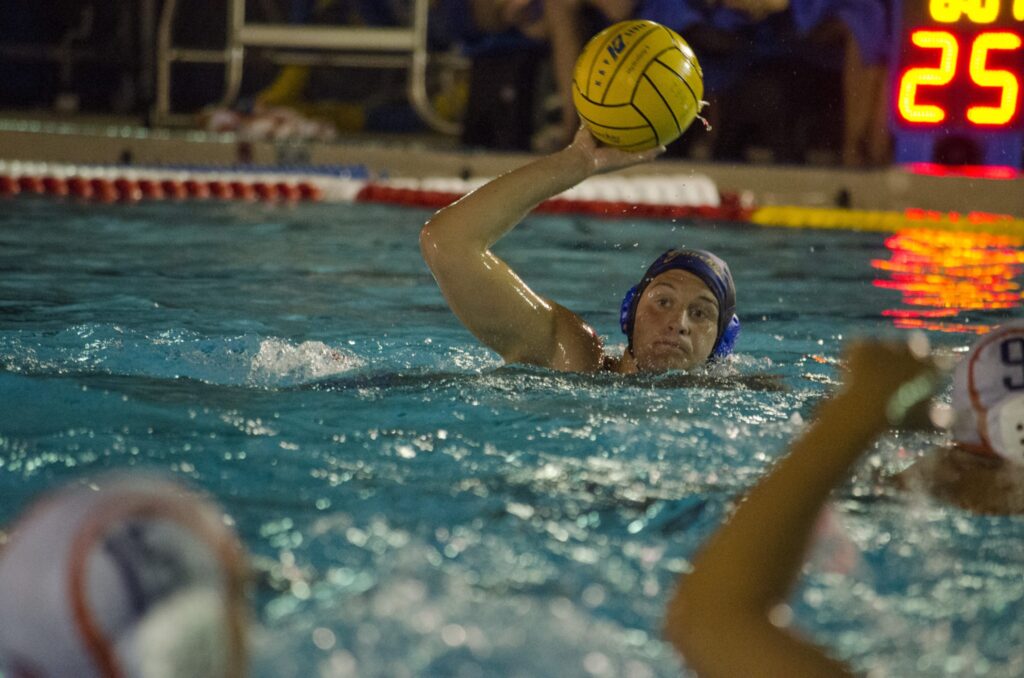 The UCSB men’s water polo team still remains ranked at No. 8 in the nation, which is likely to change this upcoming Wednesday, but they have now lost three games in a row following losses to No. 16 San Jose State 7-6 and No. 4 Stanford 11-5.

Santa Barbara is now 9-8 on the year along with San Jose State, who were blown out by No. 3 Cal. Meanwhile, Stanford extended its winning streak to three matches and is now 9-3.

In what may have been the Hauschild brothers’ final collegiate meeting, Shane’s Gauchos struggled to produce enough offense versus his brother Ben’s Spartans. The Gold Coast Conference opener saw both Ivan Gvozdanovic and Boris Jovanovic sit out with injuries, which explains some of the offensive problems UCSB experienced Friday night.

The first goal of the game came from Shane Hauschild off a power play midway in the first quarter. UCSB then continued to hold the Spartans scoreless until the second quarter.

With the Gauchos beginning the second quarter with a goal from sophomore attacker Brannan Haket, it looked as if UCSB was in control. However, the Spartans then went on to score three consecutive goals. San Jose St. held UCSB at two goals, resulting in a 3-2 score at halftime in the favor of the Spartans.

In the third quarter, after falling behind 4-2 off another Spartan goal, Shane Hauschild found the back of the net to make it 4-3. Shane’s brother Ben, then showed Shane up by scoring two goals of his own to make the game 6-3 entering the fourth quarter.

It was too little too late for the Gauchos in the fourth quarter, but they did manage to hold the Spartans to a single fourth quarter goal while scoring three goals of their own. The Gauchos final scoring effort came from Brannan Haket’s second goal of the night, as well as goals from Spencer Wood and Jesse Morrison.

The Gauchos’ comeback was halted by the sound of the final buzzer, ending the game 7-6. Despite giving up seven goals, Justyn Barrios still had an impressive night with nine saves. Both Hauschild brothers led their teams with two goals apiece.

With hardly a break between games, the Gauchos faced off against No. 4 Stanford at noon the next day.

The Gauchos appeared to be simply outmatched by the Cardinal on Saturday, as UCSB gave up a hat trick to Stanford freshman Ben Hallock and lost the game by a score of 11-5.

Shane Hauschild opened the game by scoring, however, the Gauchos just didn’t find enough of the net. UCSB got plenty of shots off, as the Stanford goalkeeper Drew Holland had an impressive 17 saves. Holland, a senior, has had at least 10 saves in each of the past six games.

Sophomore Jacob Halle gave the Gauchos their second goal of the game, but the halftime score was 5-2 Stanford.

With goals from Adam Lott, Reed Cotterill and Cole Brosnan, UCSB was able to post five goals on the day but were outperformed by Stanford’s 11 and were defeated.

The Gauchos will look to end their three-game losing streak when they continue their road trip at Long Beach State this Friday, Oct. 20 at 7 p.m.