Several human diseases as well as a number of treatments, especially those that target cancers, induce a response in cells known as apoptosis — cell suicide. A few years back, researchers discovered that many cells are remarkably able to spring back from the brink of death in a process called anastasis. Now, a new study done by two UC Santa Barbara labs demonstrates the active, two-step nature of the process in which cells are not only able to recover from near-death but also proliferate and migrate.

“A key step in apoptosis is the activation of enzymes called caspases. People who elucidated the mechanisms by which cells undergo apoptosis thought that once caspases were activated, there was no going back,” Denise Montell, a Duggan Professor in the Department of Molecular, Cellular, and Developmental Biology at UCSB, said. “So it was a surprise a number of years ago when we found that many different types of cells could actually recover after [executioner] caspases activated. In this experiment, we induce the cells to undergo apoptosis by treating them with some kind of chemical toxin and the cells activate caspase and they’ll start to die. If we then wash away the toxin, they can recover.”

To study the process, Montell, in collaboration with the Kosik Molecular and Cellular Neurobiology Lab at UCSB, analyzed messenger RNA produced in cells that were not treated, cells that were taken to the brink of death and cells that were allowed to recover for one, two, three, four, eight or 12 hours. They collected the cells at each of those time points and then proceeded to sequence every messenger RNA in the cell to see what was changing during the process.

“What we found is that it is, in fact, an active process, and we see that the recovery is at least a two-step process. We see that at one, two, three and four hours the cells all look similar to one another, so there’s an early phase. And then at 8 and twelve hours they look different from the early phase [cells] but still not the same as untreated [cells],” Montell said. “This tells us we have an active two-step program and they may not ever get back to exactly the same as they were. They may have some permanent memory of this near-death experience.” 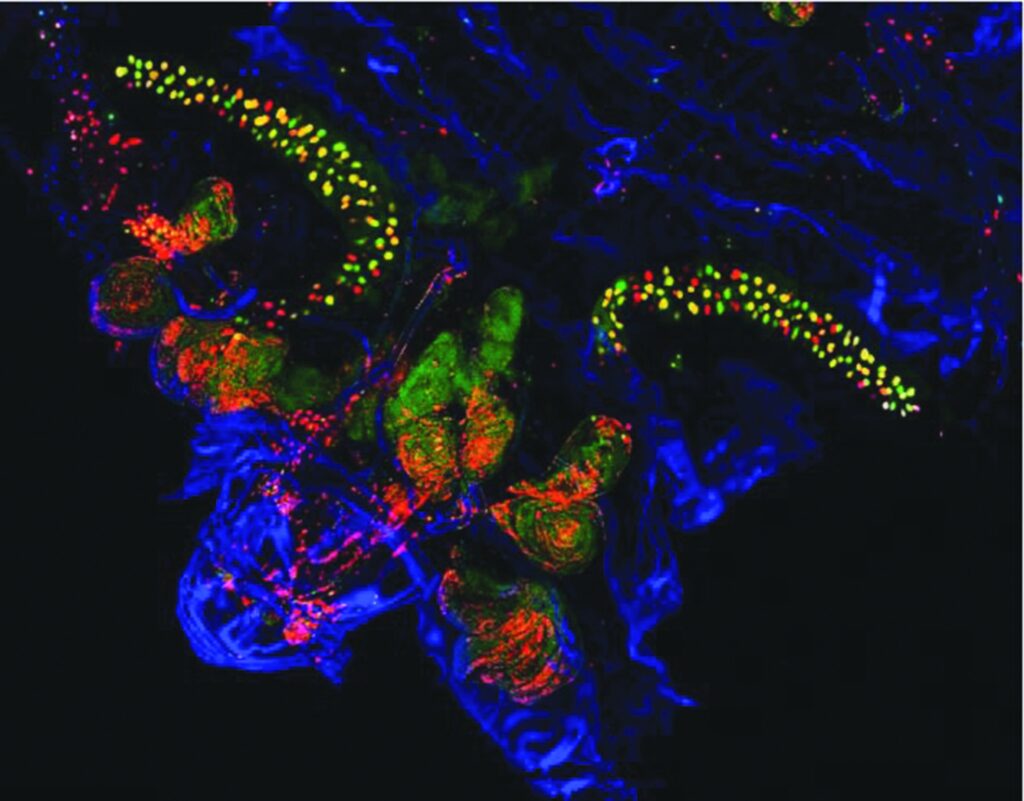 Above is an expression of caspase in a fruit fly. Caspase is the enzyme that carries out the end phase of apoptosis. Following a dose of an apoptopic stimulus, cells can survive caspase activation. However, before Montell and colleagues, identifying which cells survived was difficult since the cells were not marked in any way. / Courtesy of Denise Montell

Early in the recovery process, the cells are repairing and proliferating, and only later do they become migratory. Throughout the entire time, however, the cells are continuously expressing pro-angiogenic factors, which stimulate blood vessel production. These are hallmark characteristics of a wound-healing response, as the body attempts to supply blood to the damaged tissue in order to regenerate and replenish its cells.

“This is exactly what you would not want to happen when a cancer cell is treated with chemotherapy. Chemo and radiation therapy initiate this apoptotic response; they cause cell suicide,” Montell said. “Imagine a cancer cell barely escapes with its life and activates what in a normal cell would be a wound-healing response. It proliferates, migrates and brings new blood vessels in. In the context of cancer, this is exactly what we don’t want them to do.”

By analyzing the mRNA sequences collected from treated cells, the researchers found that even when cells are on the brink of death and have activated the apoptotic suicide program, they continue to preserve and enrich survival mRNAs, i.e., mRNAs that encode survival proteins. Treating the cells with a chemical toxin causes them to become stressed, and it is normal for cells that are stressed to try to activate a protection program against that. If the stress is too severe, however, they will switch to the suicide program. Thus, even as these cells are actively undergoing apoptosis, they remain poised to recover should the stress somehow cease.

Montell and her collaborators’ findings, which appear in the Journal of Cell Biology, raise certain questions regarding the biomedical applications of these processes. Could anastasis underlie the problem of relapse following treatment of cancers with chemotherapy and other radiation treatments? By continuing to study this process in a variety of cells and in a variety of different organisms, researchers may be able to gain valuable insight into the complex mechanisms of cell death and cell survival.

would you mind linking to the Journal of Cell Biology article?