The Daily Nexus
Sports
No Love Lost: Blue-Green Rivalry Hype Builds Toward Sat. Clash
October 12, 2017 at 5:10 am by Jorge Mercado 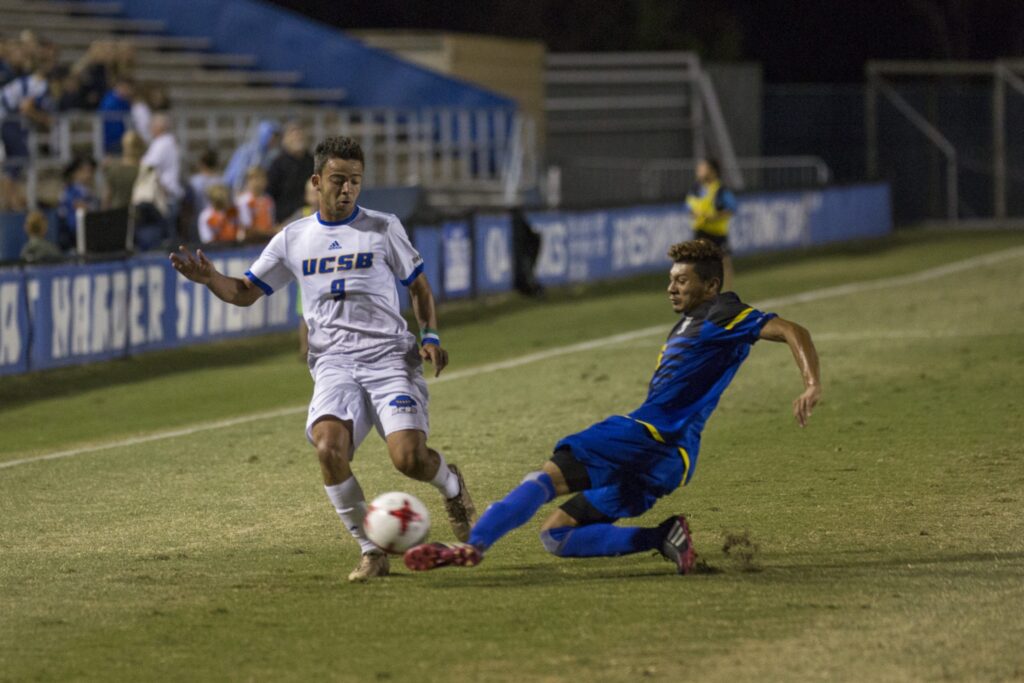 The greatest rivalry in all of college soccer has officially been renewed for another year as the blue UCSB men’s soccer team hosts the first of two match-ups against its green rival Cal Poly this Saturday at 7 p.m. in the most anticipated soccer match of the season.

Santa Barbara welcomes its bitter rival, boasting a 5-5-3 overall mark and 3-1-1 conference record, but will be looking to take its frustration out on Cal Poly after suffering an awful 3-0 loss at UC Davis on Wednesday.

The Mustangs are rolling into town with struggles of their own, as they are currently owners of a four-game losing streak, placing them in the bottom of the North Division Conference standings with a 1-4 mark after a 3-2 double overtime loss to Sac State on Wednesday.

Cal Poly has been, for a lack of a better term, consistently inconsistent. CP started out the season 0-4 before winning five straight before again becoming owners of a four-game losing streak which leads them to its 6-7 overall record.

For Santa Barbara, Saturday’s game is not a must-win. However, it missed an opportunity to take a bigger lead in the conference standings with that loss to UC Davis, falling into a three-way tie for first place in the North with the Aggies and the Hornets, after they beat Cal Poly, meaning there is not much room for error with just two weeks left before tournament time.

UCSB owns its Blue-Green rivalry with Cal Poly with an impressive 48-18-9 record against their fierce competitor. Normally, a record that lopsided would not give reason to support the notion this is the most impressive rivalry in college soccer, but the last few years would beg to differ.

Over the last 10 years, the two squads have gone on to play some intense matches, with the record being 8-6-6 in favor of UCSB. Cal Poly is the only team to sweep the season series in the last 10 years as well, accomplishing the feat just once during the 2012-13 season. That also marks the last time CP has defeated UCSB in Harder in the past 19 years.

Additionally, Santa Barbara has only won five of its ten home games over the past decade, with the last three games here at Harder Stadium ending in ties. UCSB, however, did take the victory at Cal Poly last year to win the season series.

Not only has the great play helped increase the tenacity of the rivalry, but also the attendance, especially at Harder Stadium, has helped take this game to the next level.

Last season’s attendance peaked at 11,424, the highest attended game in the NCAA in 2016 and in 2014, and the match reached 14, 919 fans in the Stadium, making it the second largest campus crowd in NCAA history, excluding playoffs.

Getting to the game, the advantage seems to be with the home side despite the loss yesterday. Before that, the Gauchos were on fire, winning five of their last six games with their only non-win being a tie at UC Irvine.

Before being scored on three times by Davis, freshman goalkeeper Adam Carrillo was on a roll, allowing just four goals in his previous six starts, and earning his second Big West Defensive Player of the Week honors last week for helping the Gauchos go 1-0-1.

Even taking into account the three goals against the Aggies, Carrillo still holds the best goals-against average in the entire Big West at 1.05. His 40 saves rank fifth in the conference.
Another freshman grabbing the headlines in Santa Barbara is Randy Michael. The forward has UCSB’s most consistent offensive player leading the team in goals (5), assists (4), and total points (14). His 14 points also rank fourth in the Big West.

Michael is also the only other Gaucho this season to win a Big West award. He won Offensive Player of the Week honors during the week of Sept. 28, after helping the Gauchos earn two victories against conference foes with two assists and two goals.

Since conference play has started, Michael has earned nine of his total 14 points in these important matches with three goals and three assists.

In the five Big West games UCSB has played, as a team, it ranks second in goals (10), assists (11) and points (31) while also shooting the second-highest percentage (.15).

One of the keys for Cal Poly to earn a victory at Harder Stadium will be importance of starting the game off fast. This season CP has been outscored in the first half of games 11-8, but have bounced back to outscore opponents in the second half 6-5.

Not only that, but its defense needs to limit the Gauchos opportunities, which is something it has not done much of, as they’ve been outshot 181-119 over the course of the season.

The Mustangs will likely rely on goalkeeper Simon Boehme, whose 59 saves currently serves as the best mark in the Big West. The junior has allowed the fifth least goals in the conference, 15, and his .79 save percentage is a conference best.

Boehme has also only allowed 15 goals on the season despite his team giving up the most shots. The 15 goals allowed is the fifth most in the Big West and his 1.24 goals allowed per game ranks fourth.

Two players on Cal Poly’s side are tied for the team lead in goals (3). However, senior defender Adam Olsen will be sidelined during Saturday’s action due to earning a red card in Wednesday’s game.

This means junior forward Sean Goode will have to try to carry the offensive flow against the Gauchos. Goode scored a goal against Sac State.

Sophomore forward Diego Alonso will look to help his junior counterpart out as he leads the team in assists with four on the year, also tying him for the fourth best mark in the Big West.

The rekindling of rivalries is always a special time in sports, especially at the collegiate level. No matter the sport, an intense rivalry game, a roarous crowd and a great stadium are always a great recipe for a wonderful evening. Especially for the students who will look to throw their tortillas Saturday Night.

The Blue-Green rivalry will be renewed at 7 p.m. on Saturday, Oct. 14 at Harder Stadium.