Five furry friends peer out over the edge of their patio in Isla Vista, curiously sniffing passersby as their proud, tattooed father sits beside them. 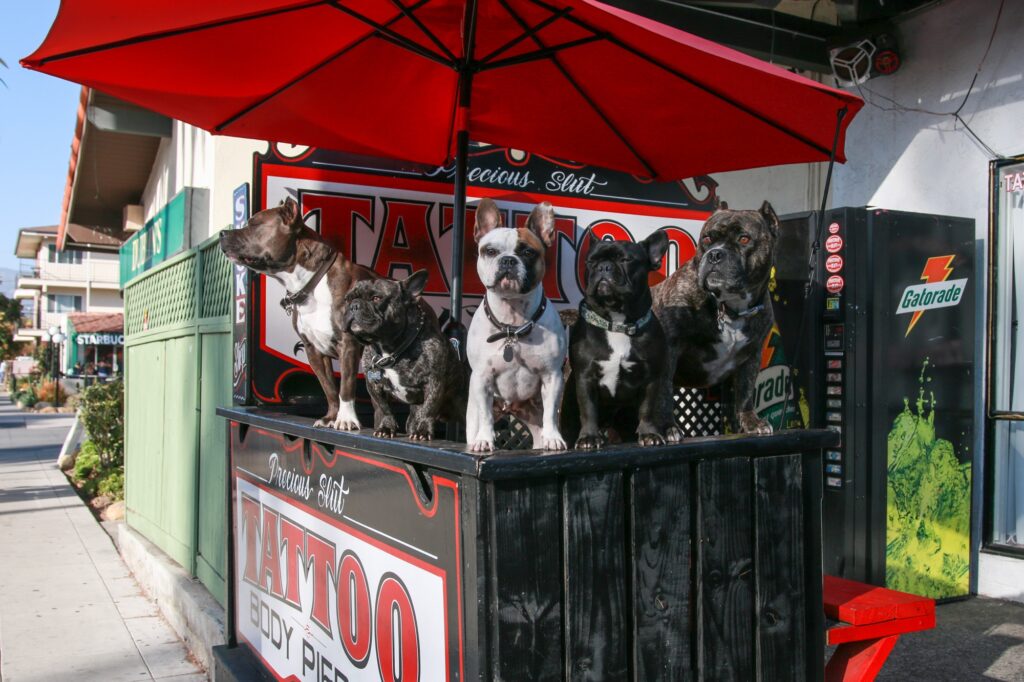 From left to right, Stormy, Tucker, Maisy, Buster Brown and Jacob look out onto the street side from the patio area of Precious Slut Tattoo. Anthony Lai / Daily Nexus

Precious Slut Tattoo, a local piercing and tattoo parlor, has long grabbed the community’s attention with its risqué name. Now, students have five more reasons to flock to the shop.

Stormy, Jacob, Tucker, Buster Brown and Maisy have become an integral part of the Isla Vista community through their eagerness and friendly nature.

Tracy Holt, who opened Precious Slut Tattoo 12 years ago, said his dogs are a form of support for Isla Vistans and visitors on both good and bad days.

“Whether it’s finals, boyfriends, girlfriends just broke up with you, parents kicking them out of school, wrecked the car, DUI,” Holt said. “Everyone in Isla Vista seems to know those dogs; a lot of people know them by name.”

Holt said he has owned dogs for his whole life and once owned 11 dogs at the same time. He said the “unmeasured” companionship is unlike any other.

While all of the dogs have been raised under the same roof, they’ve each developed distinct personalities.

Stormy, one of the American Pit Bull Terriers, is seven years old and has established herself as the alpha dog of the pack. She is strong and protective but loving, and she insists on sitting at the kitchen table for dinner each night.

Jacob, the six-year-old “chicken” and second pit bull, gets creative when it comes to stealing more time with Holt.

“Jake sits on my shoes in the morning ’cause he knows I need them to leave,” Holt laughed.

Holt said he is not supposed to have a favorite, but has a special attachment to Tucker, a two-year-old French Bulldog. The codependent Tucker follows Holt around everywhere he goes.

Maisy is a one-and-a-half-year-old French Bulldog who enjoys fighting sprinklers in her free time.

Buster Brown, the 10-month-old French Bulldog and baby of the group, is always ready for a chase, even if it means running into the street during a Nexus interview.

Despite their varying ages and unique traits, Holt said all the dogs are protective and ready to defend anyone in need, even against Holt himself.

“I’ve raised those dogs to protect anyone,” Holt said proudly, comparing it to raising children.

“If you raise that animal to be shitty to other people … then I don’t feel that that dog is going to defend you,” he said. “You’ve allowed that to happen.”

Owners should be especially mindful in raising muscular dogs like pit bulls because they have a greater potential for defense than smaller dogs, Holt said.

“The only problem with the scenario of a pit bull is he’s genetically built and designed to be that star kind of athlete,” he said. “He just … is more capable of defending.”

Several years ago, Holt’s dog of 14 years died. He didn’t know if he would get another.

“There was such a vacancy in my life, a lack of protection, a lack of ability to hear what was going on outside my house,” he said. “I never noticed that void in my whole life … and then I just realized how vulnerable I felt without it.”

Holt had trouble putting into words the positive impact that his pups have had on his life.

“The thing that I feel like so many people are looking for in the world and don’t know where to find it … I feel like I’ve done all of that in this little mini group of mine,” he said.

Holt, recalling the devastation in Isla Vista after the events of May 23, 2014, said the dogs have acted as a source of comfort for both communities in mourning.

“If I could only say anything, it’s how at the end of the day no matter how shitty life is, no matter how bad this big mass shooting thing in Vegas… People come here and they pet these dogs, and you see it make a difference in people’s lives,” Holt said.

Stormy, Jacob, Tucker,  Buster Brown and Maisy have been around to see several UCSB graduating classes come and go, and alumni remember them when they come back to visit.

A version of this article appeared on page one of the October 12, 2017, print edition of the Daily Nexus.

When I was at UCSB in the late 60s, everyone wore bell-bottom cords, but that went out of fashion. The same occurs with tattoos. In the last few years, we have seen increasing number of patients requesting tattoo removals. Of course, a nice facial tattoo will really improve your job prospects.

I come from a family of Boxer lovers but that is a beautiful pack of Bulldogs. And it sounds like Mr. Holt is raising them correctly and with love. Like Boxers, Bulldogs can be very territorial and it sounds like he’s done a better job than me of socializing them. I hope he spills his secret.

I wonder if his insurance company knows he has pitbulls in his store interacting with customers? Irersponsible ticking time bomb

despicable. pit bulls are WONDERFUL and loving dogs. get over your prejudice.