The Daily Nexus
Music
Billie Eilish Kicks Off I.V. First Fridays With Mellow Sounds
October 10, 2017 at 9:50 am by Hannah Jackson

On Oct. 6, 15-year-old Interscope Records prodigy Billie Eilish stopped by People’s Park to kick off the first performance of the Isla Vista First Friday concert series. Eilish, just two days into the North American leg of her first-ever (and sold-out) world tour, graced the crowd with her self-described “gloom pop.” Opening for her was 23-year-old Brooklyn based Nigerian musician Thutmose. The genre-transcending artist hyped up the crowd with hard-hitting hip hop tracks like “Ok Ok” and showed his softer side with “Summer’s Gone” before free styling over the track of Kendrick Lamar’s ubiquitous summer banger, “Humble.” Eilish, who danced her way onstage to the theme song from “The Office,” appeased the restless crowd with her organic, ethereal sounds, as well as a few bass-heavy renditions of songs from her first EP dont smile at me.

Eilish, though only 15, has already made waves in the music world. Her breakthrough single, “Ocean Eyes,” written by her brother Finneas O’Connell, generated over 40 million plays on Spotify and has been remixed by noteworthy artists blackbear and Astronomyy. Additionally, her song “Bored” was featured on the hit Netflix show “13 Reasons Why.” She has been christened “Pop’s Next It Girl” by Vogue and proclaimed “Most Impressive 15-Year-Old” by Billboard. However, what is perhaps most impressive about Eilish is that she is authentically herself (which is a major feat for any young teen, let alone one baring her soul onstage every night.) Backed by cool synths and sparse acoustics, her distinct falsetto does most of the heavy lifting, often employing faint echoes to back up her breezy vocals.

Dressed in an oversized JOYRICH pullover, baggy checkered pants and thick gold chains, someone unfamiliar with Eilish’s music would be surprised by the juxtaposition of her skater boy style with her dream-like tunes. Backed only by her brother Finneas, the multitalented siblings kicked off their set with an upbeat rendition of “COPYCAT.”  They then launched into a more subtle and haunting version of “idontwannabeyouanymore.”

Despite some technical difficulties, Eilish remained remarkably cool, playfully asking, “Is there a joke or something I can tell?” while waiting for the production crew to finish their adjustments.

In the past, Eilish has drawn comparisons to the queen of sad pop herself, Lana Del Rey, as well as fellow teen breakout artist Lorde. With her performance of “watch,” it is clear to see where these likenesses come into play. Eilish switched up her typical high notes with a lower register familiar to Del Rey and danced around stage with Lorde-esque body jerks. However, what sets Eilish apart from her contemporaries is her lack of theatrics, relying solely on her voice to capture and hold the audience’s attention – and capture their attention she did. This was the first of her songs that had the entire crowd swaying and singing along. 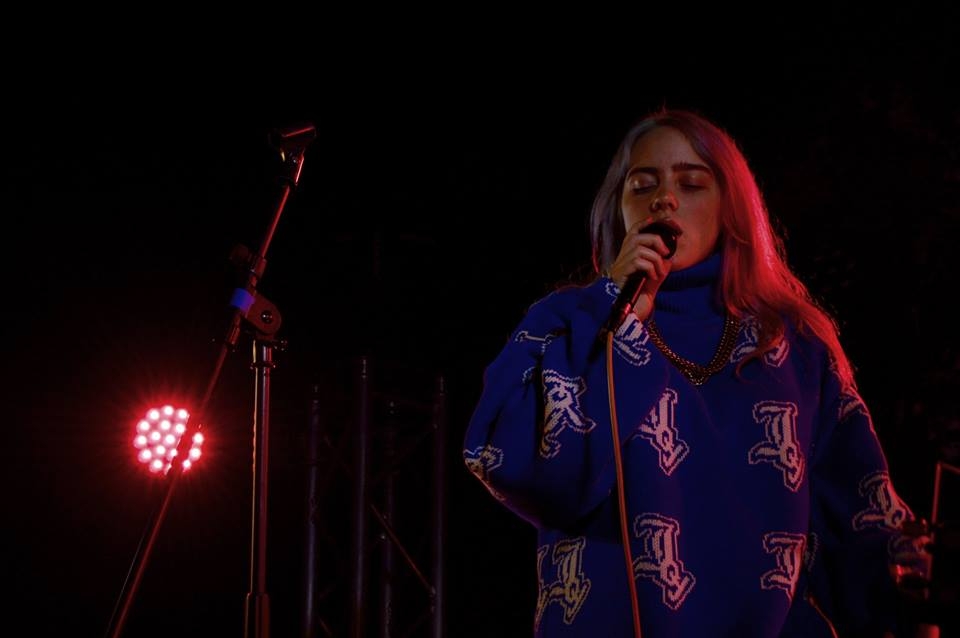 Courtesy of AS Program Board

Perhaps one of the most memorable performances of the night was Eilish’s ukulele cover of Drake’s “Hotline Bling,” which second years Cameron Costello and Taylar Hender agreed was “soft and lowkey.” Eilish transitioned straight from her unexpected Drake cover into “party favor,” linking the two with the dial tone intro to the song. In this notably sassy performance, Eilish bops to an uncharacteristically strong beat, reminding the audience through her lyrics that she will not be treated like someone else’s property.

Writing about themes far beyond her years, listeners may wonder how Eilish can connect with complex issues such as love, heartbreak and other situations that may not personally affect her yet.

Saving her song “my boy,” for the end of her set, Eilish revamped the usually melancholy track by giving it a saucy makeover, which can only be described as pure fun. She hyped up the crowd with a funky sibling dance break and impressive vocal riffs. Closing out the performance were Eilish’s two most recognizable songs, “Ocean Eyes” and “Bellyache”. Her presentation of “Ocean Eyes” stayed true to the original, possessing a dreamy, underwater quality that still had the audience scream-singing along. “Bellyache” switched from its usual acoustic sound to a sick bass underlain in the chorus that closed out the show on a high note.

Concertgoers as a whole were extremely impressed with Eilish’s set, many of them never having heard of her before that night. A common theme expressed was astonishment of her age.

Tess Gording, a first year, exclaimed, “Her music is totally relatable. She’s not even 16 and she’s this talented!”

Third years Amanda Milianta and Nick Vaughan, both longtime fans of Eilish, were impressed by her performance.

“Her demeanor and her stage presence were incredible.”

The takeaway: Billie Eilish made a lasting impression on residents of Isla Vista, and on their music tastes as well.

As second-year Quintin Romano said, “I’m definitely going to add some of her songs to my playlist.”