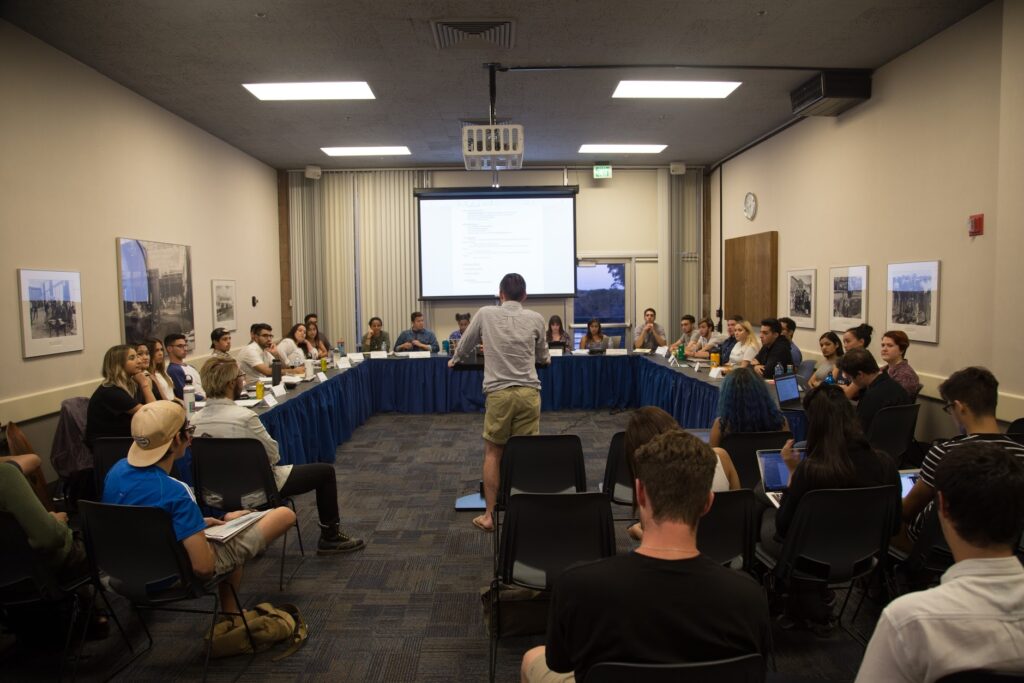 The “$48 Fix” plan would potentially allow for free college education for students in the state of California by
implementing a $48 surtax a year for the median taxpayer in California, according to the $48 Fix report.  Will Tran

The resolution acts as a directive for the office of the A.S. president and external vice president of statewide affairs (EVPSA) to support the $48 Fix through campus and statewide events this year.

The $48 Fix is an extension of the Master Plan for Higher Education adopted by the state of California in 1960 that committed to free higher education for Californians. According to the $48 Fix report, tuition could be free for university and college students in California with the implementation of a statewide income surtax of $48 per year for the median California taxpayer.

While the Senate’s approval of the resolution is primarily symbolic, it will prompt action from the executive branches of A.S. to hold campus-based campaigns, UC Student Association and U.S. Student Association meetings, as well as lobby visits with state representatives to gain support for the plan throughout the state.

“I would like to see people direct their energy and anger to their local legislators,” Woodrow Davidson, EVPSA deputy chief of staff and one of the resolution’s student sponsors, said. “That’s where people need to begin ramping up the pressure. In the end, it has to pass through the state.”

The resolution was the first item on the agenda at the senate’s first meeting of the year and was authored by senators Dhishal Jayasinghe and Andrea Reyes.

“Tuition [that is] free is not a ridiculous idea,” Reyes told the Nexus on Tuesday. “It’s something that is possible in our state.”

Spencer Brandt, one of the resolution’s student sponsors, said in a changing world and economy, the state must invest in higher education and not only fund K-12 education.

“It’s important to have [senate’s] support to continue the movement for free college in California and gather momentum at the grassroots level,” Brandt said.

Davidson told the Nexus on Tuesday he planned to attend a community college after high school because of its affordability, but his father encouraged him to attend UC Santa Barbara.

He reminded the senate at the meeting that a UC, California State University and community college education was originally free. He said he believes the current political climate of instability presents students with an opportunity to make important changes at the higher levels of government.

A version of this article appeared on page one of the October 5, 2017, print edition of the Daily Nexus.

You have to be kidding me………let’s just make anything anyone wants free and raise a state tax for it on people who work. Food, water, gas, housing, transportation, education, clothing…….whatever. As we’ve seen with health care, demanding service rights under the guise of equality or politically correctness or because it benefits us in the future, leads to a reduction of the quality of the service provided, and ridiculous escalation of the costs. No one “owes” anybody a free secondary education. I’m taxed to support 12 years worth of education for everyone already,( including up to three free meals a day,… Read more »

Agreed – plus, there is no incentive to major in a lucrative field or even finish getting your degree. Why bother studying – doesn’t matter if you fail the class – it’s FREE! If they actually are seriously considering doing this, they would have to do some sort of reimbursement after the student gets their degree.