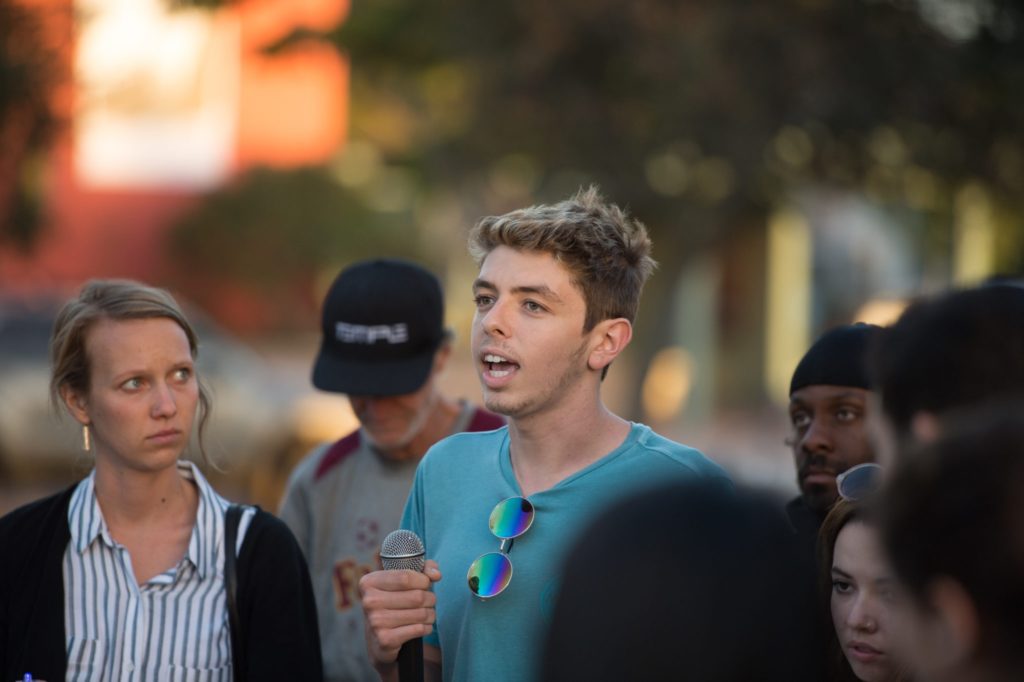 “Disheartened,” and “gut punch,” were a couple of the words Isla Vistans used during a vigil to describe Sunday night’s mass shooting on the Las Vegas strip.

Community organizers quickly arranged the event after hearing the news early this morning. For many, the tragedy brought back feelings of terror that the small town of Isla Vista experienced only three years prior.

Sam Dreitzer, a second-year sociology student at UC Santa Barbara, has lived in Las Vegas for 18 years. He was born two miles away from Mandalay Bay Resort and Casino, the site of the shooting.

“I grew up going to the aquarium there,” he said.

Hearing the news of a shooting in your hometown “changes you as a person,” Dreitzer said, and called for meaningful gun control by requiring psychological evaluations before all firearm purchases.

Blue LED lights, a bouquet and a single candle adorned the benches of the Isla Vista Love and Remembrance Garden, and community leaders, students and police officers shared their fears, anxieties and frustrations in a gathering of about 25 people. 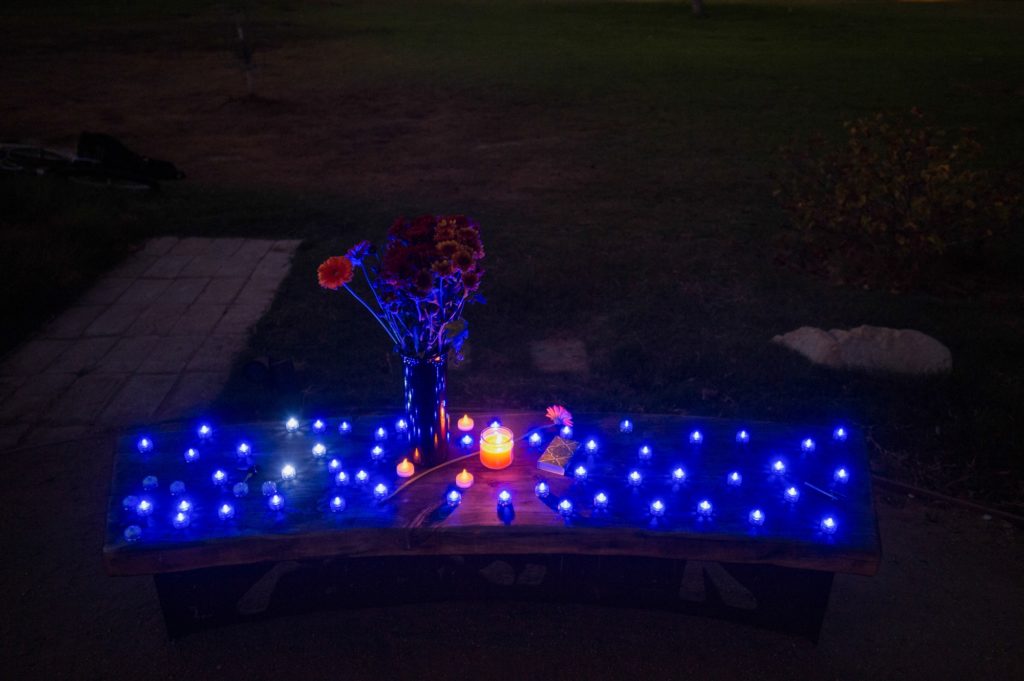 The blue LED lights were adopted as a symbol of unity in 2014 to represent the community’s powerful response to tragedy. Will Tran / Daily Nexus

Richard Martinez, a gun control activist and the father of Christopher Michaels-Martinez, a 20-year-old UCSB student killed in the 2014 shooting, spoke to the Nexus over the phone on Monday.

He said the shooting in Las Vegas was “outrageous.”

Martinez works for the nonprofit gun control organization Everytown for Gun Safety and has been an advocate for gun safety since 2014.

He is now advocating for similar legislation on a federal level.

Martinez has called for universal background checks on all gun sales and said it is appropriate to talk about solutions in the direct aftermath of a shooting.

“As a country, we have to do better. It’s just not acceptable, it’s outrageous,” he said. “People don’t suddenly do these things … We need to do a better job of keeping guns out of the hands of dangerous people.”

During the vigil, Ethan Bertrand and Spencer Brandt, I.V. Community Services District board members, distributed blue lights to each attendee and encouraged them to place the lights on park benches. 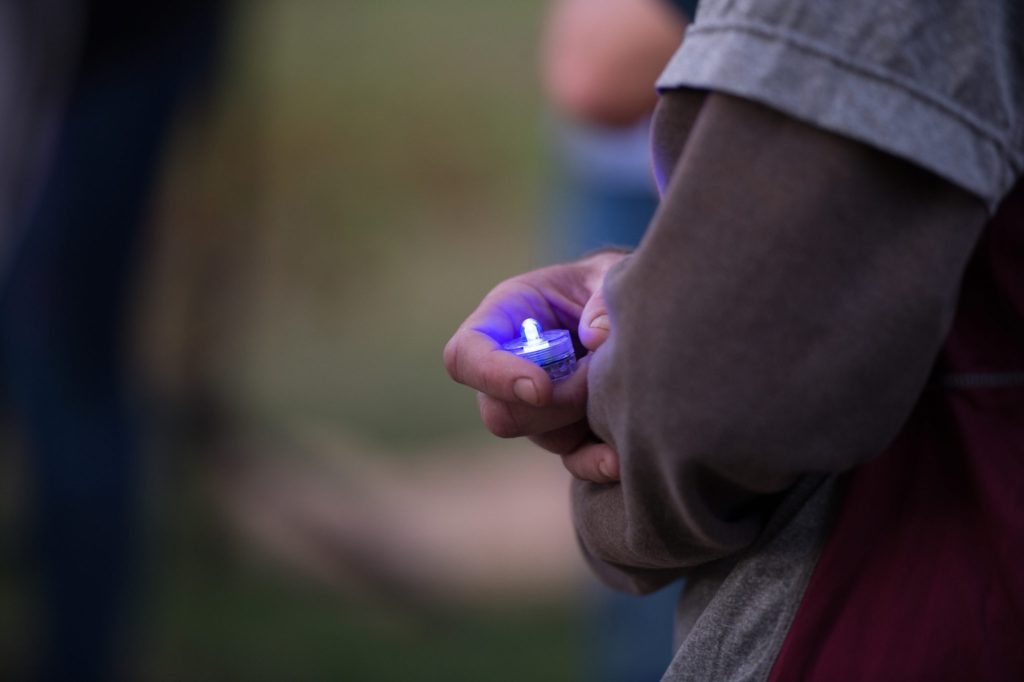 An attendee holds a blue light at the vigil in honor of the lives lost in a mass shooting on the Las Vegas strip. Will Tran / Daily Nexus

The blue LED lights were adopted as a symbol of unity in 2014 to represent the community’s powerful response to tragedy.

Though the event was guided by introspection and personal stories, several attendees also expressed frustration with politics and a lack of progress in gun control.

“How many more times we will be handed these [blue lights]?” asked Carlos López, I.V. Recreation and Parks District board member.

According to CNN, the shooter owned 42 guns. He kept 19 in his home and 23 in the hotel room from where he killed at least 59 people.

“That’s a weapon of war; a weapon of war has no place on our streets,”  Kevin Sabellico, a second-year physics major, said about automatic weapons. “I think we have to take a deep, hard look at ourselves in this country.”

According to the Las Vegas Review-Journal, at least 59 people had died and more than 525 were injured as of Monday evening.

The gunman shot at the 22,000 person crowd gathered on the Las Vegas Strip for the Route 91 Harvest Music Festival from the 32nd floor of the Mandalay Bay Resort and Casino.

Most attendees spoke about their emotional response to the tragedy, but López and another attendee also drew attention to the positive response from the Las Vegas community.

The blood bank typically opens at 7 a.m. but began drawing blood from donors at 4 a.m. According to the Review-Journal, at least 250 people had signed up to donate by 7 a.m.