When Professor Bernard Kirtman began teaching at UC Santa Barbara 52 years ago, the Vietnam War was in full swing and the university was on the cusp of academic and social revolution. 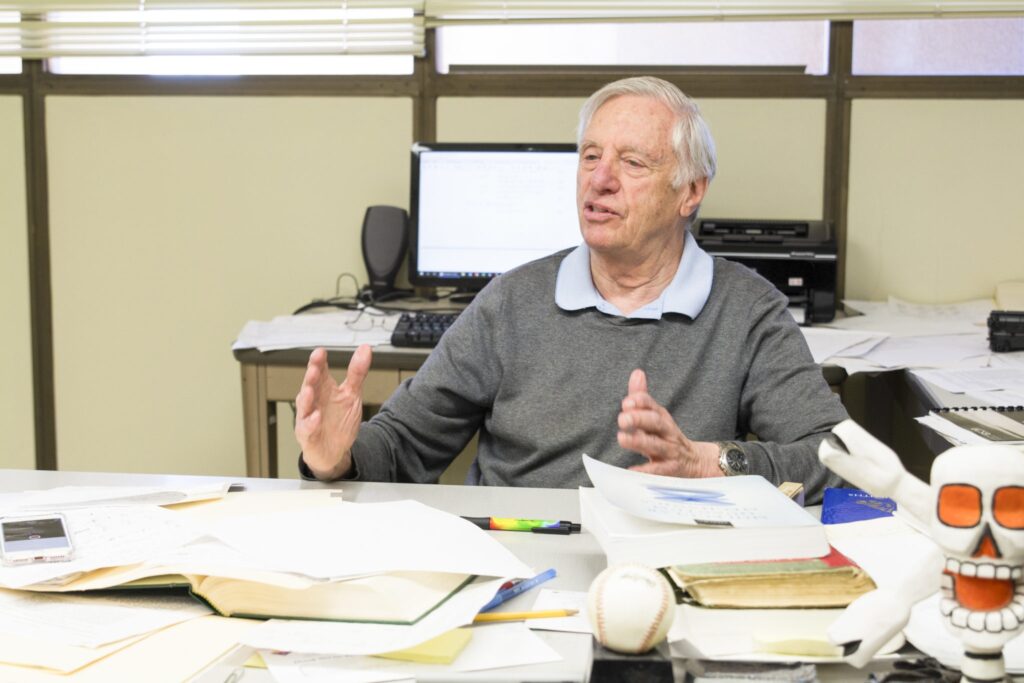 Today, at 82 years old, Kirtman says he never guessed he would be the longest active teaching professor at UCSB.

With vast knowledge of chemistry and university history as well as a witty sense of humor, Kirtman is the kind of professor who prompts the image of a long conversation over a cup of tea.

He instantly make guests feel welcome in his paper-cluttered office on the fourth floor of the chemistry building.

Kirtman is a professor in the chemistry department and specializes in the quantum theory of electronic structure, which requires predicting the properties of all chemical systems based on the electronic motions in their atomic systems.

Born on March 30, 1935, and originally from New York, Kirtman went to Columbia University for undergraduate studies and received a Ph.D. in physical chemistry from Harvard University in 1961.

The year 1965 was an exciting time for UCSB because the campus was expanding geographically and academically, Kirtman said.

“The campus had decided to grow and I think that’s part of why I came here,” Kirtman said. “It was going to grow into a major research university.”

“I get lost walking on the campus myself,” he joked, adding that the many construction projects over the years have transformed the university. The chemistry building where his office is located was not yet constructed when Kirtman began teaching in 1965.

As Kirtman reflected on his most memorable moments at UCSB, he recalled the Vietnam War as a critical turning point in politics on campus and in the university’s academic curriculum.

Kirtman said during the war he was responsible for managing a crisis courses program, in which professors could alter their class syllabi to include information about the operation in Vietnam.

“Professors could either participate in that program and change the orientation of their course for a quarter to meet what was going on in Vietnam, or continue the way they were going,” Kirtman explained.

While Kirtman did not reorganize his own classes on quantum theory to address the Vietnam War, he created a course for all students on the social responsibility of scientists in response to the war.

“At the very beginning of the course, I had to reorient the class to develop the scientific way of thinking about things,” he said, noting that scientists and humanists differ in the way they reach conclusions and answers to problems.

In bridging scientific thinking and social issues, Kirtman connected the way science was becoming increasingly political and addressed how scientists should be vocal in scientific political dialogue.

Kirtman said his own son researches climate science at the University of Miami in Florida and said he hopes his son becomes involved in the political debate surrounding climate change.

“I often say, ‘The lawyers think they can abolish the law of thermodynamics, which is a scientific law you can’t abolish,’ ” he said with a chuckle. “Science is made political by politicians and it is a very important issue right now.”

Kirtman said he is most proud of his work with students who have gone on to careers in chemistry as well as his own research conducted in quantum theory.

“There’s been a lot of individual research moments when the light bulb went on,” he said.

He is especially proud of the “revolutionary” work he did with quantum theory as applied to electric fields interacting with crystalline materials. This work was featured in a symposium in Rhodes, Greece, in 2009.

While Kirtman said he certainly has favorite students, he said he believes any student can be successful if they are willing to work diligently.

He also served as the chair of the chemistry department from 1985 to 1994 and is the former chair of the Academic Senate. He was also one of the first professors to teach students in the College of Creative Studies when it formed in 1967.

A love of UCSB runs in the family, as Kirtman’s wife also worked for the university as the director of publications for the Nexus. The couple will celebrate their 60th wedding anniversary in December.

While his two children live on the East Coast, Kirtman said he loves the UC and California and does not have plans to leave anytime soon.

“You don’t leave unless there’s good reason to leave,” he said. “Santa Barbara is a great place to live and work with very good faculty and students. So, why leave?”

Kirtman dedicated his life to academics and said working and being a part of a university has been extremely rewarding. As the school year begins, Kirtman advises all students to take advantage of UCSB’s unique classes and academic opportunities.

“Have fun. It’s a great time of life and you have no responsibilities,” Kirtman said enthusiastically, with perhaps a touch of nostalgia in his eyes. “Take everything that’s offered and pursue all your interests.”

A version of this article appeared on page one of the September 28, 2017, edition of the Daily Nexus.