The UC Santa Barbara Registrar is making improvements to the Gaucho On-Line Data (G.O.L.D.) website that will make it more mobile-friendly and consistent with other UCSB websites. 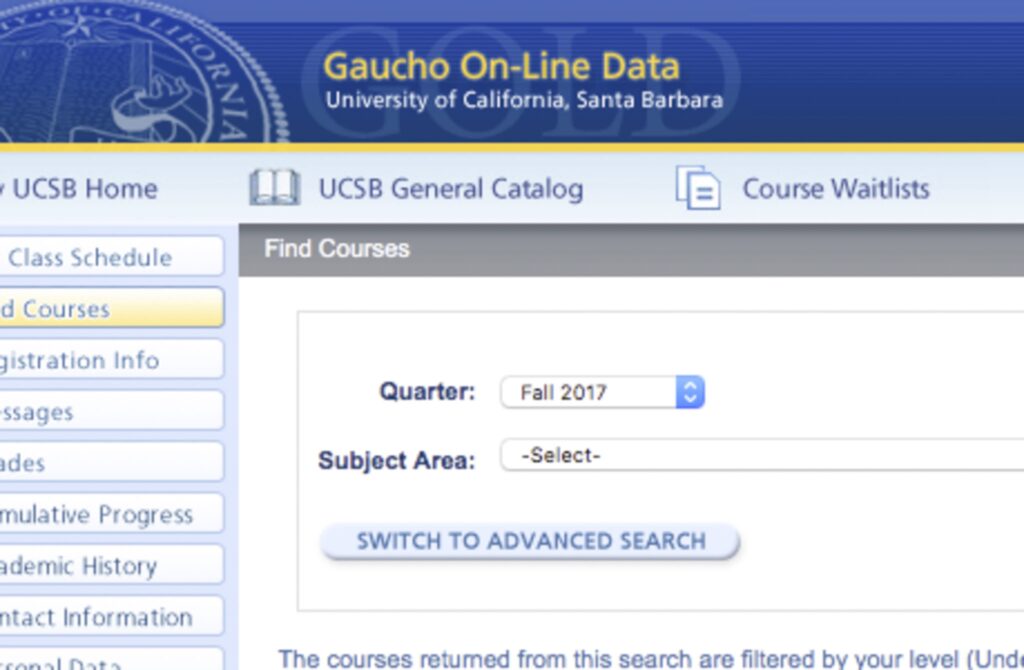 G.O.L.D. is a website on which students can access their UCSB courses and schedules as well as check their graduation requirements and degree audits. The university released the current version of G.O.L.D. in the beginning of 2006, and the website has not undergone changes since its launch.

The new updates will make the website more compatible with mobile phones and alter the color scheme and design to align with other websites, such as the official university website, which is clearer and more modern than the current G.O.L.D. site.

“We made attempts to make it look and feel like a UCSB site. Right now, it’s kind of its own thing,” said Anthony Schmid, the Associate Registrar for Information Systems.

Schmid said the changes will make G.O.L.D. “more manageable” for students to access the website on their phone. He said approximately 44 percent of the 4,864,849 times G.O.L.D. has been accessed in the past year has been through mobile phones.

“Whenever I try to access G.O.L.D. on my phone to check things, it’s a bit of a pain to navigate and have to pinch and zoom to see anything,” Schmid said.

The Registrar is also making adjustments to the “Graduation” page on G.O.L.D. to be more straightforward and is redesigning the “Advanced Course Search” function, Schmid said. There is not a set date for the completion of these projects.

Schmid said, however, that the university is focused on updating the “look and feel” of the website before altering its functionality.

Student Information Systems and Technology provides support for the Registrar’s websites and estimates the total project will cost between $15,000 and $20,000, depending on the amount of additional work needed based on the site testing.

Meanwhile, students have created their own extensions to the G.O.L.D. website unaffiliated with the university. An application called GauchoMap launched on Oct. 2016 on Google Chrome that allows students to locate their classes on G.O.L.D. in an interactive map.

Students have shared information about the application on Facebook groups such as Free & For Sale, a page on which students can buy and sell items like clothes and furniture. According to the Google Chrome web store, the application currently has 274 users.

Schmid said students also added a Rate My Professor extension to the website, which lasted for approximately two years. He said the university is not concerned with the student-created extensions unless the extensions use the UCSB name and seal.

Schmid said while the Registrar has not received any vocal complaints about the G.O.L.D. website, the Registrar wanted to upgrade the appearance of the site to keep it up-to-date with modern standards.

“We figured it was time to move into the 20-teens [of technology],” Schmid said.