The Daily Nexus
Virtual Reality
Preserving Our Rights in the Digital Age
September 24, 2017 at 7:59 pm by Hugh Cook 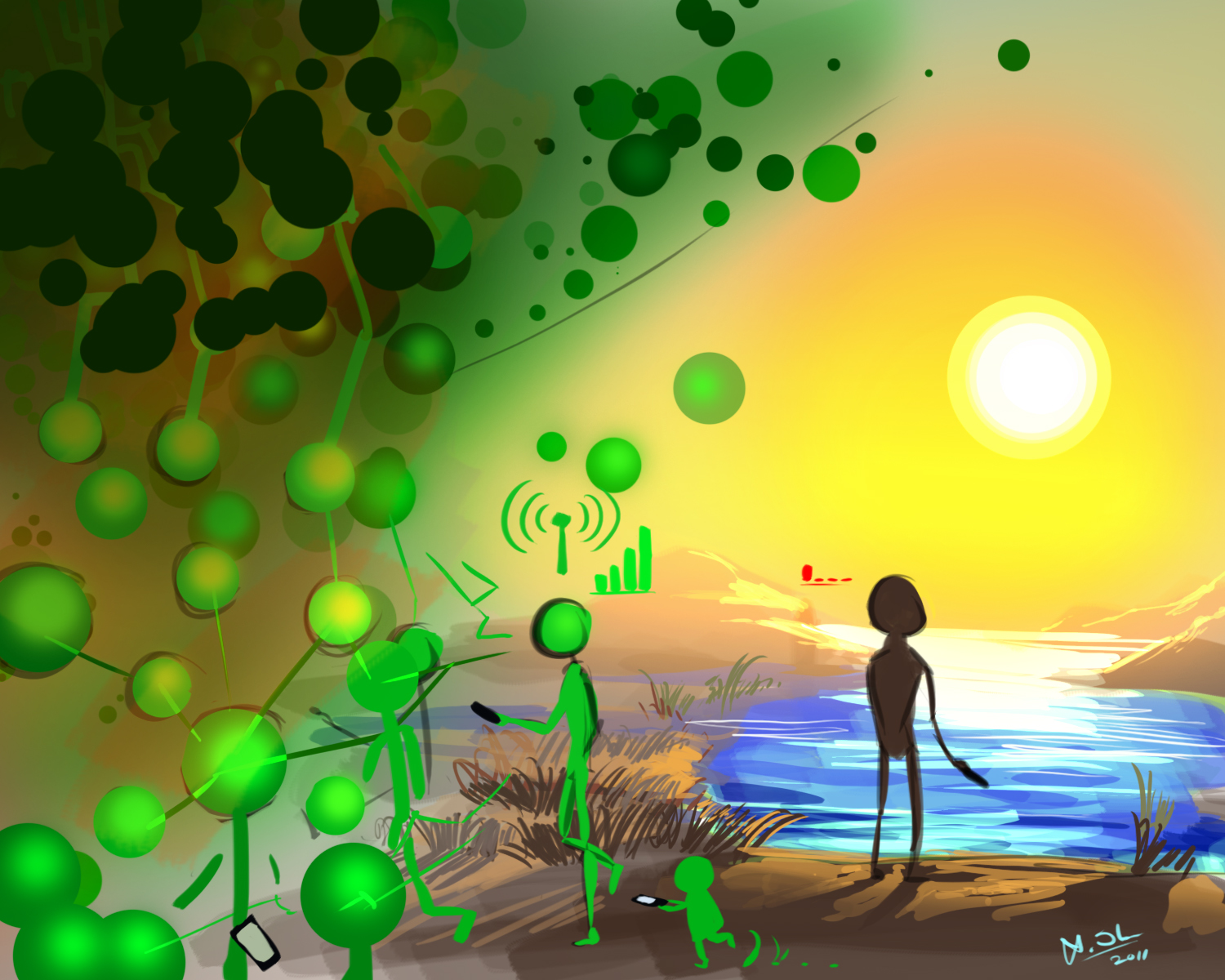 An open internet will be crucial to maintaining human rights and creating avenues for civilians to maintain governments which serve their best interests in a democratic manner. The internet offers an open platform for the exchange of ideals and philosophies across a world that is evermore connected by myriad, nebulous systems  designed to regulate markets, interests and people. The internet connects individuals with subjective points of view, allowing unique perspectives to develop and flourish into innovative philosophies, as Liberalism did during the Enlightenment. These ideas exchanged through a human-web could one day change history, enhancing the quality of life future generations experience, and even the social organization of our world. This revolutionary platform of communication represents the ultimate success of liberal ideals developed during the Enlightenment; these same ideas formed the fundamental ideals behind the United States Declaration of Independence.

Many activists refer to Digital Revolution, marking the impact that the connections allowed by the internet have created.  Movements seeking to create change have new ways to increase coordination and participation in campaigns for everything from political change, increased economic equality, to corporate accountability. However, the internet is a double edged sword for all activists. Publicity, while necessary to spread ideas among the people, can be disrupted, misused and turned against the campaigns by its opponents. The massive leverage offered by the internet to sway public opinion and remove the importance of the individual was categorically displayed in the 2016 U.S. presidential election.

Through the use of Big Data major political parties and campaigns influence elections, coordinating what information specific voters receive via many forms of communication. Big Data, a concept as well as a commodity, refers to all information about an individual left by their online presence, whether through Facebook likes and posts, or mobile phone apps that track users movements. These movements include both around where you grab lunch around your city, and where you go when you leave the nation. It also records the speed of hand movements, offering information on the mood of the individual.

Purchasing an online blueprint of each civilian’s personality appears to be the future of politics: a world where politicians attempt to buy votes by virtually limiting what we see when we go online, and choosing what we feel through carefully crafted ads designed to manipulate our feelings. “The Data That Turned The World Upside Down,” an article by Hannes Grassegger and Mikael Krogerus notes that in the 2016 U.S. presidential election both Hillary Clinton and Donald Trump hired firms specializing in gathering this data, and targeting individuals with specific ads tailored to their personalities, relying on the fears or hopes of specific demographics. This abhorrent invasion of privacy simultaneously disempowers the individual and systematically destroys representative democracy, creating a government whose power rests in its ability to suppress information and control its population.

These visual deceptions are made possible by the science of psychometrics, a field that measures psychological traits in an individual. Psychometrics relied on physical questionnaires, meaning it was useless to those in politics– until companies such as BlueLabs, hired by Clinton’s media specialists, and Cambridge Analytica, a little know U.K. firm that was hired by the Trump campaign organizers, began to use Big Data to create ads for specific personalities, groups and voters.

Now, politicians can design countless, varied messages for every citizen, all easily accessible by internet. Grassegger’s and Krogerus’ article reveals that Cambridge Analytica was also hired by those coordinating the Brexit campaign, which used an analogous approach to pass a referendum the implications of which few voters understood, causing financial upheaval and increasing the frustration felt by citizens of the U.K. When the information citizens have access to is controlled by those in power, propaganda is used to gain support for violent, costly wars, and consolidate the power of the current establishment. Once the state is no longer a system coordinated to serve citizens, it is a system that aims to control its citizens through half truths and propaganda, violating the ideals it is sworn to and abusing the rights of the citizens it is sworn to serve.

Once your personality is analyzed, messages are geared towards the factors that strongly characterize you, pre-designating your political opinion. Huxley’s idea of biological mass production is bypassed, because his uncannily accurate vision explored in Brave New World of authoritarian-enforced, predestined ‘social stability’ is becoming a reality due to political exploitation of Big Data and invasive, targeted political messages. Targeted ad-campaigns and  inexcusable suppression of information are the realized downsides of the internet, leaving voters without the ability to elect representatives who truly serve them.

It is more important now than ever before to preserve the freedom and widespread availability of information offered by the web.

However, the internet is also a massively powerful tool supporting change, allowing the creation and strengthening of movements fighting for human rights around the world.

Robert Heinlein’s analogy of a ternary operator and a clandestine three-cell of revolutionaries displays the fundamental connection between our right to organize as citizens and the technology at the base of the internet and operating systems. His revolutionary novel The Moon is a Harsh Mistress, details how a ternary operator, an important piece of C language code, is similar to a three-cell system of organization used by political activists agitating for change in any given social system: A ternary operator uses three separate pieces of data, allowing a conditional output depending on the variables. These three separate factors work as one, creating a more variable and accurate outcome based on the data received.

Revolutionary groups have historically operated through cells of activists made up of three people each recruiting three subordinates, allowing flexibility and security while creating a nexus of activists working together for a common goal. For example, the French World War II resistance employed this clandestine cell system to subvert the Vichy government. The coding language that allows us to connect through the web closely resembles the most reliable system of organizing activists for political change. Technology and activism are inextricably linked, meaning that ensuring we continue to have access to the internet is of paramount importance.

Author and activist Symon Hill explores the role of the web in recent social movements and humanitarian efforts in Digital Revolutions. From the Arab Spring, which challenged dictators in the titular region, to the Occupy movements protesting corporate criminality and systemic inequality, the internet has served as a tool connecting activists and creating publicity. The web is also revolutionary as it offers an easy route for those interested to learn about any issue and join movements, creating humanitarian change around the world.

It is more important now than ever before to preserve the freedom and widespread availability of information offered by the web. Access to the internet means equal access to information, ensuring any and all people can become educated upon any number of topics, offering a modicum of equality of opportunity. Citizens of the web have access to news about what their governments and representatives are doing, and the ability to exercise their right to free speech, reaching their elected officials via email, phone, or social media. There are many ways to exercise our right to and therefore preserve our open internet.

You can reduce the amount you are targeted with biased advertising in several ways. Each will make sure you receive a more accurate view of our political and social systems, as well as protecting your privacy from those who exploit it via Big Data. On an iPhone, go into settings, then privacy, and under advertising turn on  “Limit Ad Tracking.” On an Android you can “opt out of interest based ads” by going into “accounts,” then “Google,” finally turning them off in ads. By turning off targeted advertising and encouraging friends and family to do the same not only are you protecting yourself from corporate exploitation and political deception, you are protecting the equality, communication, and freedom the open internet offers us all.

Hugh Cook advocates for protecting yourself from exploitation in the new digital age.