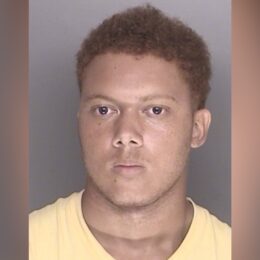 Isaac Brown, an 18-year-old first-year SBCC student and linebacker for the college’s football team, was arrested for resisting arrest, causing serious bodily injury and dissuading an executive officer by force.

He was still in custody as of Friday and his bail is set at $25,000. Brown has been suspended from athletics until the situation is resolved, according to a statement from SBCC spokesperson Luz Reyes-Martín.

Sheriff’s deputies and UC Police Department (UCPD) officers responded to a “large crowd and fight” on Del Playa Drive and Camino Del Sur at about 11:40 p.m. on Saturday, according to SBSO.

Brown allegedly fled the scene and attempted to resist arrest from officers two separate times. During the second time, Brown “aggressively pull[ed] the officer down and to the ground” where she struck her head against the bumper of a parked truck, according to SBSO.

The officer, who has not been named, lost consciousness for several minutes and was later taken to Santa Barbara Cottage Hospital. She has been released and continues to recover, SBSO said in a release.

SBSO and UCPD began an investigation to identify and find Brown, obtained an arrest warrant and took him into custody on Tuesday “without confrontation.”

Reyes-Martín said the SBCC dean of student affairs will determine what type of further disciplinary action is necessary.

“We send our sincere best wishes to the UCSB Police Officer that was injured and wish her a speedy and full recovery,” she said. “We take cases like this very seriously and will continue to work with law enforcement and our college administration to respond.”

You omit a major fact: UCSB has built lots of new housing for UCSB students, and SBCC students have rushed in to fill the vacancies… the general scarcity of housing on the South Coast but antipathy of non-20-year olds toward IV drives SBCC students into IV. Yes, usually out-of-district and wealthy, BTW.

The “omission” was not intentional because that’s a separate, but related issue. Not disputing what you said, just pointing out that I limited what was said due to time constraint & that it IS a part of the problem. Thank you for adding that in.

Agreed – I was a Gaucho from 95-99 and my friends and I always wondered why someone would “go away” to JC. And whose parents would pay room and board for their kid who could not get into a 4-year school. Definitely nothing wrong with going to JC – it’s a great way to save money, but why not just live at home and go to a local JC?

The consensus opinion among many is that STEM classes at SBCC are markedly superior to their equivalent offerings at UCSB. So why not “go away” to SBCC, especially since there is a significant cost savings?

Build a wall between UCSB/ IV and SBCC! Get em out

IVFP is doing just that, in a psychological sort of way. They’ve increased their presence in the areas where SBCC students live, they have tabs on the problem places w/ SBCC presence. Meanwhile, UCSB has purchased the Tropicanas, but they need to get the evictions going.