The Daily Nexus
News
County To Install Pardall Stoplight
August 24, 2017 at 12:31 am by Maura Fox

The construction of a traffic signal at the intersection of Pardall Road and Embarcadero Del Norte in Isla Vista will begin this month and will be completed by Sep. 15, according to county officials. 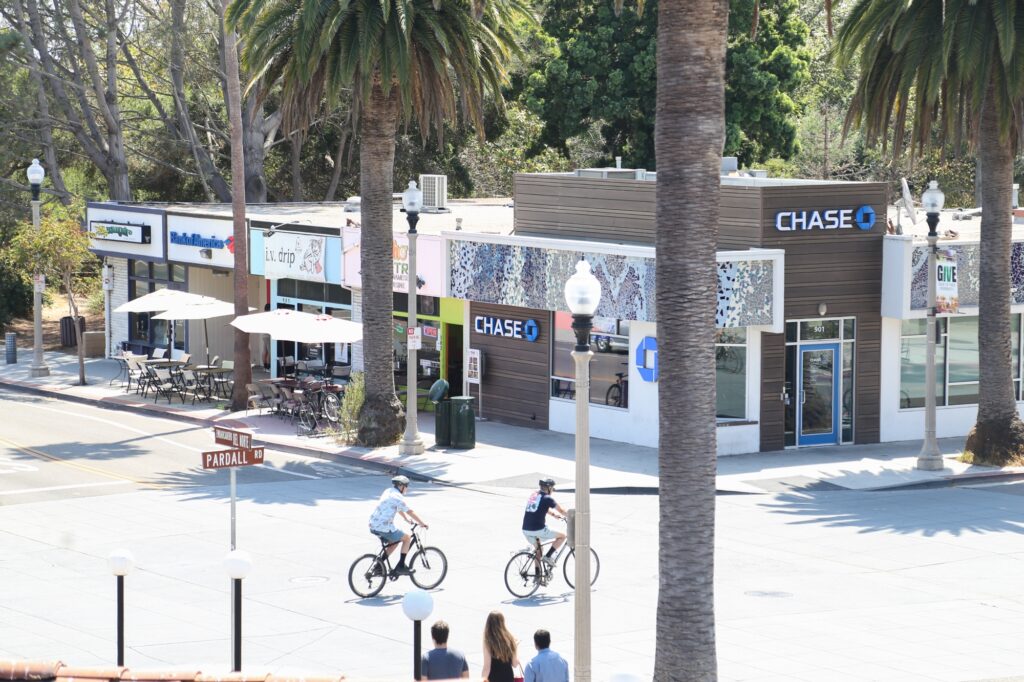 The California Highway Patrol will begin enforcing the new traffic light law immediately after installation, which is expected to be completed by Sept. 15. Jenny Luo / Daily Nexus

The County Public Works Department estimates the project will take four to six weeks. The traffic signal at the intersection was first discussed in the mid-2000s as part of the Isla Vista Master Plan, a long-term infrastructure project for I.V.

County Public Works director Scott McGolpin said Southern California Edison electric company will remove the existing eight streetlights at the intersection within the next week and the new traffic signal poles will replace the streetlight infrastructure.

According to Lieutenant Steve Larson of the California Highway Patrol (CHP), the CHP will begin enforcing the new traffic light law immediately after installation.

“People need to realize that once a light goes on, it is enforceable,” Larson said. “If the light is red, the light is red. The bicyclists, the skateboarders, they all have to stop at the stoplight.”

According to the County Public Works Department, the project costs $300,000. The public works department will fund half the cost and UC Santa Barbara will provide funding for the other half.

McGolpin described the installation as a “pretty easy job” because it will be completed on the sidewalks, allowing cars, bikers and pedestrians to still use the street during construction.

The traffic signal will not have sensors but will operate on a timer of approximately 20 seconds. Pedestrians will be able to see how many seconds they have to cross the street to adjust their speed.

McGolpin said 20 seconds is the approximate time it takes the slowest pedestrian to cross the street at the intersection.

McGolpin also said the county plans to coordinate with local artists to paint the signal cabinets, similar to those on El Colegio. He said he hopes this will minimize the chance of graffiti on the cabinets.

The project will be as noninvasive as possible, he said, because the department does not want to damage the construction completed on Pardall Road in 2009. The 2009 construction included the installation of the streetlights and palm trees, as well as pouring new concrete at the intersection.

“We want to minimize the damage because we did the improvements along Pardall and it would be costly to remove all that,” McGolpin said.

McGolpin said the county has discussed the project with the Isla Vista Community Network, local businesses, the Associated Students (A.S.) Senate and local residents. He said it also plans to work with law enforcement to ensure a smooth transition to the new traffic signal.

The plan received criticism from students in February, when former A.S. Senator Alex Giolito created a petition in opposition to the traffic light installation. The petition called for the termination of the project and urged alternative methods of controlling the busy intersection.

County officials addressed the alternatives, such as additional bike lanes in I.V. or channeling bike traffic more evenly to and from campus from I.V., but they ultimately deemed these solutions “too multilayered” to be practical.

The county originally intended to install another traffic signal at the intersection between Pardall Road and Embarcadero Del Mar but decided a signal at one intersection would create a sufficient break in the bike traffic.

“It’s a cultural change, and we’re in the heart of the community,” McGolpin said. “We think this one signal should be enough, and we wanted to have a softer touch on the community since we’re doing a signal for the first time in I.V.”

Going to be some very unhappy bikers if they actually enforce this as claimed. All of the idiots on bikes in IV blatantlyrun stop signs and signals

Why Don’t the Isla Vista police enforce stop lights/signs NOW???? I drive out there often and see close calls constantly with bikes and idiots on skateboards with their nose buried in their phones. Is another stop light going to matter if the students have no accountability as it is??