Not even three minutes into the ball game, the UCSB women’s soccer team found themselves with the early one goal lead at Spartan Soccer Complex, that was the easy part. The hard part would be holding onto that lead for the final 87 minutes of the game to keep a perfect opening weekend intact to begin in the 2017-18 campaign.

It was a tough, gritty battle but after 87 minutes had passed and the final whistle blew, the Gauchos had managed to secure their second shutout victory of the season by a final score of 1-0, and now for the second consecutive season, they have started the year 2-0.

The loss delegated San Jose State to a 0-2 start on the year for the first time since the 2014-15 season when it finished just 8-8-3 overall. Despite the loss, it was clear the Spartans were eager to play after losing their season opener against No. 24 Santa Clara and even more so after allowing the early goal. 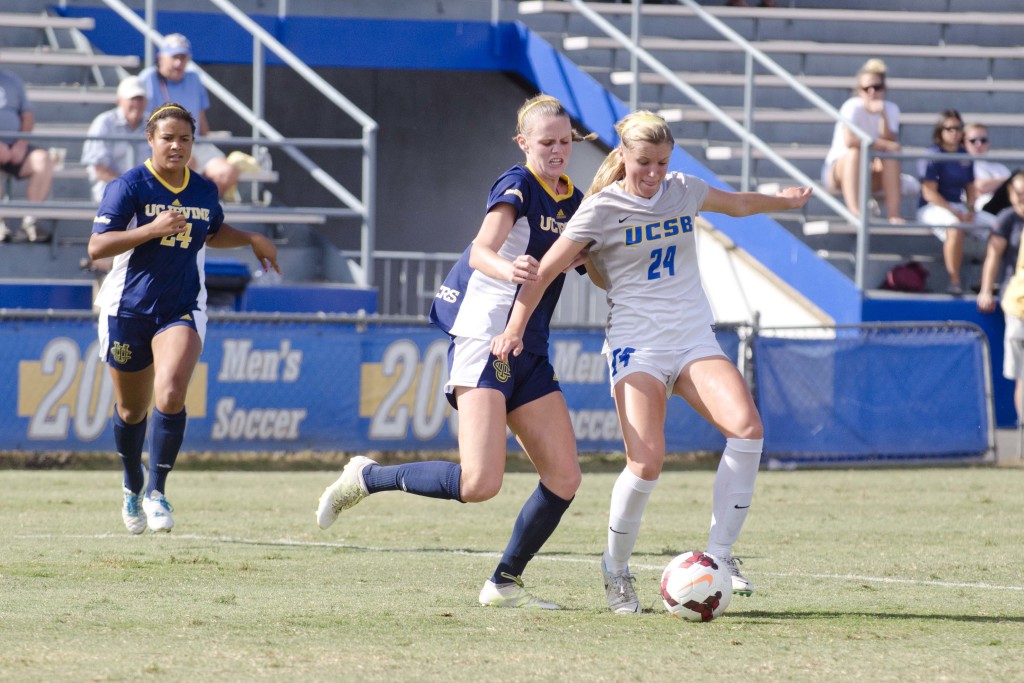 Senior Amanda Ball scored the decisive tally after collecting a rebound off of a previous shot attempt firing a low ball from around the six-yard box netting her third goal of the season. With that mark, the forward is now only one of 11 UCSB women’s soccer athletes to register at least 20 career goals.

With such an early score comes the presumption that this could possibly be an easy match runs through peoples’ minds. However, San Jose State hardly made that the case. The remainder of the first half was a battle with both teams equally possessing the ball without being to put one past the keeper.

However, in the second half momentum shifted towards the home side who finally started to dominate possession of the ball and the match.

In its previous three games, including exhibitions, UCSB often dominated the second half outscoring opponents 7-0, but San Jose State after maybe starting out a little flat, had a new fire once the second half whistle blew.

Still, Santa Barbara found a way to contest every shot and still make life impossible for the home team.

In the 48th minute, senior forward Dorthe Hoppius put up a deep, hard hit ball from outside of the box but right into the steady arms of senior goalkeeper Maddie Julian who had three saves in her shutout performance.

Trouble continued in the 58th minute after a great through pass from freshman Gabriella Hurtado led junior forward Jennifer Orozco just inside the box, however, Julian disrupted the play with a heads up tackle and after a mad scramble, the ball was eventually cleared by freshman midfielder Colby Parker.

SJSU’s best look at the equalizer came in the 60th minute off a corner kick from the right side which landed beautifully to junior forward Darriell Franklin standing right at the edge of the box on the opposite side completely unopposed. Despite not gaining full control Franklin put up the shot which trailed just bit left giving possession back to the visitors and blowing a great opportunity to tie the game.

Overall, San Jose State outshot Santa Barbara 8-3 in the second half, but with only three on goal and none actually making it past Julian, the outcome finished in favor of the visiting Gauchos.

Another game that came down to a decisive goal from Amanda Ball is nothing new to Head Coach Paul Stumpf, however, a wonderful performance on the defensive end to hold tough is certainly a welcome sight this early in the season.

UCSB’s next game is next Sunday, August 27th against UCLA. It will be the second game of a five-game road stand.