The Daily Nexus
Science & Tech
An Alternate Route After Graduation
June 8, 2017 at 1:33 pm by Stephanie Pernett

As graduation approaches, some students who pursued a degree in S.T.E.M. (science, technology, engineering and math) may find themselves needing to take extensive steps before entering grad school or their respective industry.

With increasingly complex grad school applications, tough competition for grad school and industry opportunities and burnout after 16 years of academic grind, more and more college graduates are taking time to step off the traditional path.

According to Ethan Knight, executive director of the American Gap Association in Portland, Oreg., a gap year is defined as “a structured period of time where students take a break from formal education to increase self-awareness, challenge comfort zones, and experiment with possible careers.”

While the reason behind taking a gap year varies from person to person, two students who are graduating this June found themselves needing more time to prepare for the their goals.

Reid Nakamoto, a fourth-year biology major in the College of Creative Studies (CCS), said he is deciding to take a gap year because he wants to be more prepared before applying to grad school.

“It wasn’t something I wanted to do initially, because I wanted to go straight into grad school like the rest of my friends,” Nakamoto said. “However, I didn’t feel prepared enough to apply to grad school, so I decided to stay around and continue my research in the lab that I work in. I’ll continue working in my lab until I apply, hopefully sometime this fall or winter.” 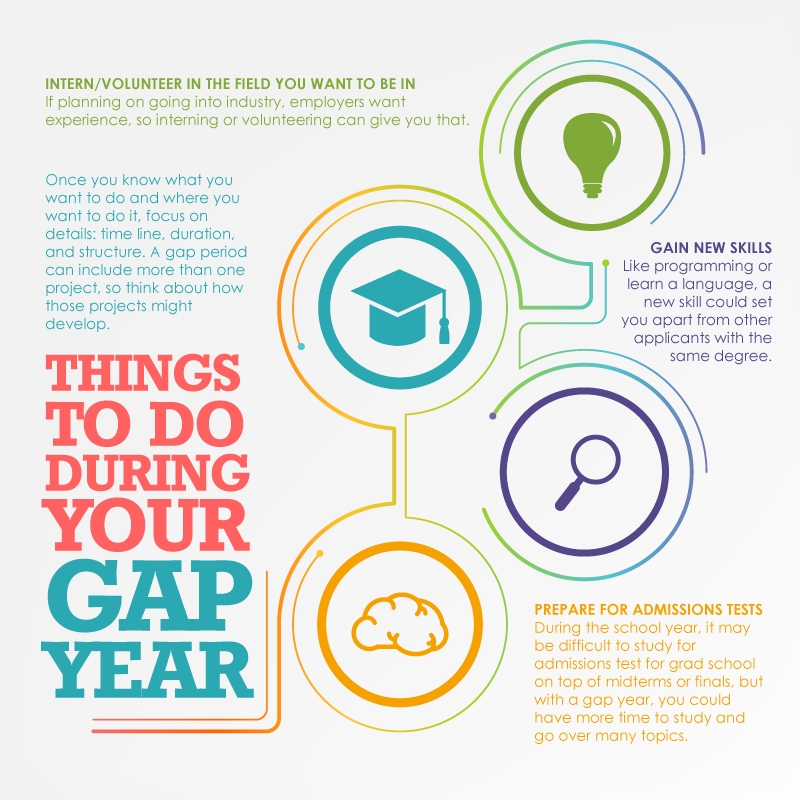 He is currently aiding one of the scientists in the lab in identifying the role of dopamine neurons in grooming. A lot of what Nakamoto does involves recording videos of the flies and dissecting and removing fly brains and ventral nerve cords so that researchers can map the neural structures present.

Similarly, fourth-year biology major in the College of Letters and Sciences, Anaiancy Ramirez, decided to take a gap year in order to prepare for the PCAT, the pharmacy college admission test.

“Since I plan to apply to professional school, there are classes that some pharmacy schools require that are not part of my major or even offered [at UCSB],” Ramirez said. “I decided to take a gap year in order to work on these classes and study for the PCAT so that I feel better prepared and more qualified to apply to pharmacy school.”

Ramirez also notes that, had she known that she needed to take more classes, she would have taken them during the summer but was not well informed at the time.

Aside from preparing for professional schools or grad school, Nakamoto and Ramirez are both planning on taking some time to gain experience in their field.

An eventual career in science may require competencies in areas that were not part of the curriculum for the major.

“I’ll be picking up other skills in the meantime, such as learning how to use MATLAB [and] Python,” Nakamoto said.

“Aside from taking classes and studying for the PCAT, I plan on working as a pharmacy technician to gain further experience in the field of pharmacy,” Ramirez said. “I’m also interested in looking for research-based jobs that’s focused more on drug research.”

One of the benefits of taking a gap year that Nakamoto is looking forward to is having time for other activities.

“I look forward to not having finals, midterms or homework to stress about — besides the GRE,” Nakamoto said. “As for non-academics, you will probably be able to find me every night fishing at the Goleta Pier.”

Ultimately, while Ramirez and Nakamoto both decided to take a gap year, they will go down different paths.

Ramirez’s goal is to be admitted into a pharmacy school or a post-baccalaureate program that she could attend the following year. With this plan, she will be on her way to obtaining her PharmD degree.

Nakamoto, on the other hand, hopes to figure out whether he wants to continue his research or go into industry work.

“I’m not 100 percent sure right now [about my career goals]. I want to go into industry, but I feel very attached to my research so I’m fairly split,” Nakamoto said. “I guess we’ll see what happens!”

With the end of the school year approaching, a gap year may be the time and space some students need in order to figure out what they may want to pursue after graduation. It could also provide the time to fully prepare for admissions tests or gain more experience that is highly valuable in S.T.E.M fields