Over the past 40 years, agricultural landscapes have been progressively dominated by cropland to allow food production to meet growing demand. These simplified monoculture landscapes raise ecological concerns about an increase in pest problems and use of pesticides, more so than for complex landscapes or landscapes with intermixed natural habitat and cropland.

A new study from UC Santa Barbara addresses this by looking at how landscape factors including crop diversity, field size and cropland extent influence insecticide use. The paper has been published in the Proceedings of the National Academy of Sciences.

Presently, similar agricultural empirical studies have yielded inconclusive results. Some studies in particular places report increased insecticide use as agricultural fields become more simplified, while others report the opposite is true. This is often due to ecologists measuring different systems — such as one system consisting of tomatoes and another of strawberries — so that they find different effects for their specific system. 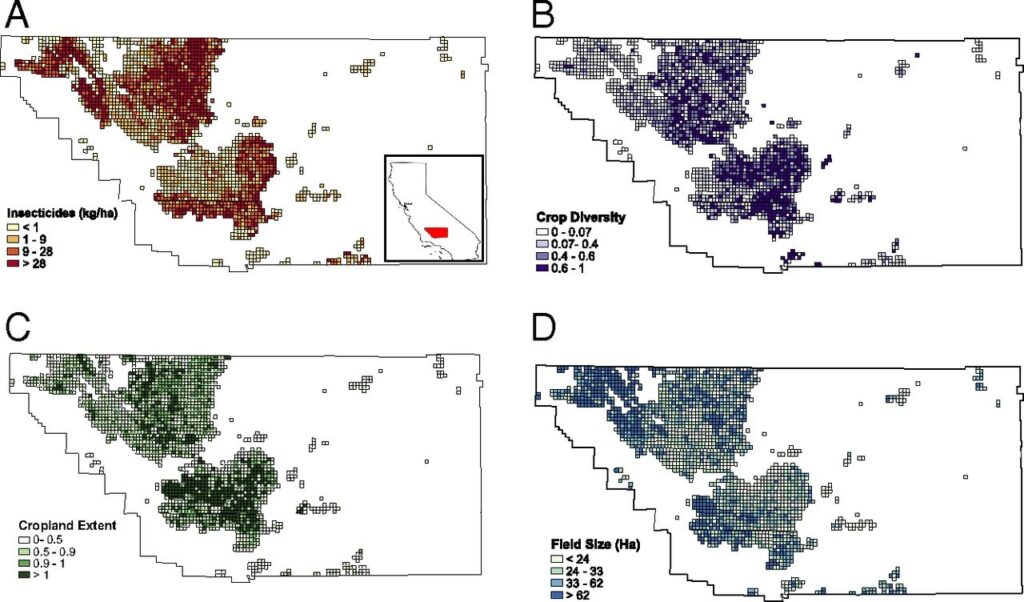 Above is a map of insecticide use in Kern County in California. (a) crop diversity calculated at species (B) cropland extent (C) and mean field size (D) by a 2.6 – km² Public Land Survey (PLS) section. For all maps, darker colors indicate larger values, and the four colors represent quartiles in the distribution.

“What we argue is that there is a reason for this, and that is because different crops have different relationships in how surrounding crop diversity or cropland extent affect insecticide use on that crop. One of the exciting parts about this paper is that it hopefully will provide some explanation for the inconclusive empirical results,” Ashley Larsen, an assistant professor at the Bren School of Environmental Science & Management at UCSB, said.

Using data from over 100,000 field-level observations from Kern County, Calif. between 2005 and 2013, Larsen and postdoctoral researcher at the Bren School Frederik Noack tested if simplification in agricultural fields led to an increase in insects and insecticides. They also attempted to gain findings on individual crop-specific relationships.

Similarly, different pests may respond differently depending on the crop. They also differ in dispersal rates, distances traveled and feeding preferences. For example, a pest might be a specialist on almonds or a generalist that consumes all types of nuts.

“Depending on these characteristics, you might imagine that whether or not there is surrounding crop area around or whether it’s diverse enough, it may or may not matter,” Larsen said.

“Interestingly, those that showed very little effect for crop diversity seemed to show an important increase in insecticides as a result of cropland area,” Larsen said. “We speculate this could have been due to whether a pest is a specialist or generalist and how it might respond to surrounding cropland in general versus the diversity of that cropland.”

The paper’s second major finding yielded that field size is consistently important for leading to an increase in insecticide use. Bare fields also experience the same effect.

As agricultural production will need to substantially rise in the next half century to accommodate population growth and people becoming wealthier, the correlation of how crop complexity or simplicity affects the amount of pests and insecticide use remains a prevalent concern among ecologists. There has been much discussion on whether agricultural production should intensify, remaining on the current agricultural footprint, or if new land should be used to produce more food but in more biodiversity-friendly ways, called land-sharing and land-sparing.

“What this [debate] basically shows is that this land-sharing and land-sparing dichotomy is just entirely overly simplified,” Larsen said. “If we’re actually going to leverage landscape factors to meaningfully reduce insecticides, it’s going to have to be by taking a crop-specific and spatially informed approach. It’s not just going to be [as easy as] ‘we should simplify’ or ‘we should expand’; it’s going to depend on the crops we’re talking about.”