The Daily Nexus
Sports
Life Goes On: UCSB Baseball Reflects on Return to I.V. Post-Tragedy
May 25, 2017 at 10:00 am by Jorge Mercado 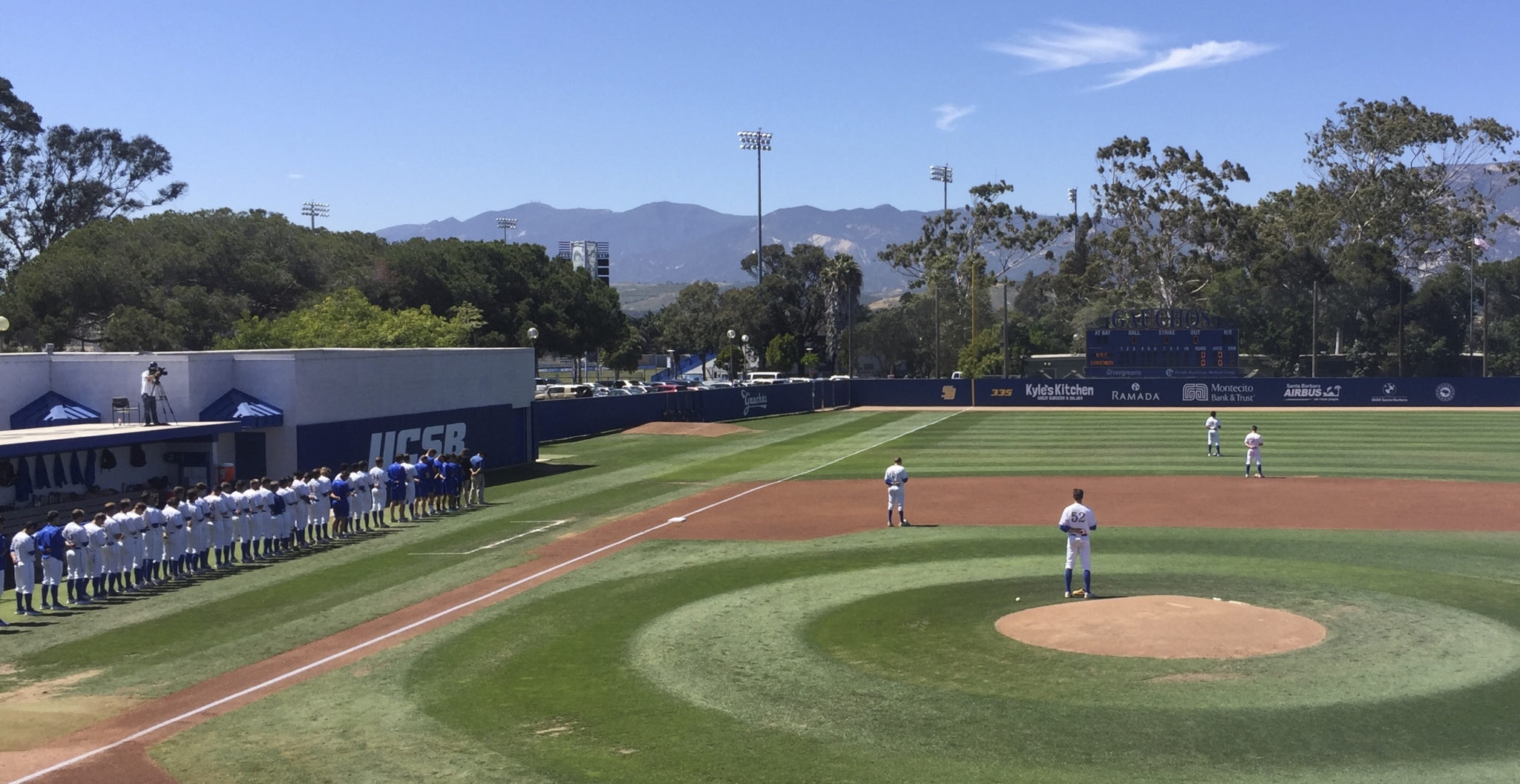 The UCSB baseball team held a moment of silence before Tuesday’s game to commemorate the tragedy that befell I.V. three years ago. Jorge Mercado/Daily Nexus

On Friday, May 23, 2014, the Gauchos were vying for a chance at the postseason with a win against UC Davis, 6-5. The team was all smiles in the locker room until they heard the news of the tragic events that took place in I.V. that evening.

“We were on the road when that happened, at Davis, actually, and we reached out to the guys not on the travel squad to make sure they were okay,” Head Coach Andrew Checketts said.

Despite the shooting, UCSB still had to play a game against UC Davis on Saturday, the final game of the three-game set. For better or for worse, Santa Barbara took the field with heavy hearts and mustered a 6-3 victory to secure a sweep of the Aggies.

When the Gauchos finally came home after their win on Saturday, they didn’t come home to the same place they had left just a few days ago. The once lively campus was instead filled with sorrow and pain.

Instead of being able to celebrate a sweep of UC Davis and possibly a chance at making the postseason, many of the players had to learn quickly the horrors of what had happened.

Walking off the pitch after a final win of the season on Tuesday defeating USC 11-2, the UCSB men’s baseball found itself in the same place it had been three years ago.

Moments before the game, the team held a moment of silence to remember the tragedy that befell UCSB. Whether it was a player, coach or someone who worked with UCSB athletics, the tragedy made them realize that changes were necessary for their own lives and beyond.

“Because baseball allows these kids to have their own culture, they had a healthy distraction and each other, really, to help them cope with this,” Checketts said.

One of the people who did not travel with the team three years ago was Sports Information Director Andrew Wagner. An S.I.D.’s job requires them to write previews and recaps of the teams they cover while releasing any breaking news about the team in a timely fashion.

Wagner still serves as the S.I.D. of multiple sports, including the baseball team that he was covering at the time.

“I didn’t travel with the team on that long trip, and despite having graduated a couple years back, I still lived in Isla Vista,” Wagner said. “So I was in town when this happened; I actually lived about 100 feet from the 7-Eleven where part of the shooting happened, and I just remember all the texts and calls asking if I was okay. It almost just didn’t feel real. This isn’t supposed to happen here, but it did.”

Despite not being a student anymore, the event stuck around in Wagner’s mind.

“It was just a night-and-day type of experience after the shooting,” Wagner said. “For a while after that, everybody just felt numb; it was weird. You just don’t imagine something like that happening in California,” Wagner said, “much less Santa Barbara and much less at UCSB where everything is more carefree, relaxed and happy.

Andrew made note of the fact that this shooting was a sort of wake-up call for him, and he, like many others, tried to cope with the horrific incident that took UCSB by storm.

“One of the craziest experiences I’ve had was the vigil at Harder Stadium, where both sides of the stands were packed tight but there was no noise. Everybody was so sad and in a state of disbelief,” Wagner said. “That vigil really hit close to home in multiple ways because, for a while, UCSB became known for partying and the shooting, and it made me so sad because this is such a great university and that’s not always the reputation it gets.”

For Checketts in particular, a man with children of his own, this tragedy brought forth the memory of another shooting that made him re-evaluate.

Checketts said. “When Sandy Hook happened, it opened my eyes. Having young kids and looking at those little faces made me sad and angry. Looking at this from our community standpoint, it was obviously scary. Isla Vista is my community. I live just around the corner. When it happens so close to home, it sure makes it a lot more real. Unfortunately, from a country standpoint, it happens so often and at such a high rate relative to other developed countries, it gets frustrating.”

Since this shooting, Checketts has been involved in trying to find solutions to the current gun issue the United States faces.

“There were victims in the Isla Vista tragedy that weren’t caused by gunfire and I recognize that, but as a 40-year-old man with young kids, this tragedy has motivated me to look more closely at how we handle our guns in this country. In California, we have seen some progress on this issue with some recent legislation, but more needs to be done…Families shouldn’t have to go through this kind of pain as regularly as they do in our country.”

Three years later, the pain the community once felt has subsided, but it still lingers around this time. UCSB defeating USC on Tuesday wasn’t the Yankees winning the World Series after 9/11 or the Saints winning a Super Bowl after Katrina, but it was a sign that life does, in fact, go on. You can try to improve the problems we face every day, and there is beauty in that.

“I don’t think we can completely stop bad things from happening across our country, but we have other developed countries with a fraction of the gun violence that we have and should be looking at their models and potential solutions to reduce our risk of gun violence. The tragedy in Isla Vista is another unfortunate reminder that we aren’t immune to gun violence, even in paradise.” Checketts said.