The Daily Nexus
Track and Field
Eleven Gauchos Qualify to NCAA West Regionals for Third Consecutive Year
May 25, 2017 at 5:05 am by Austin Cole

After stringing together a few stellar performances to end the season, including a tremendous showing at the Big West Championships at Cal State Fullerton, UCSB will once again have 11 Gauchos compete in the events set to take place at the University of Texas on Thursday in hopes of a top-12 finish to land a spot in the NCAA Final. This marks the third consecutive year that the Gauchos have sent at least 11 or more athletes to the NCAA West Regionals.

The NCAA first round is a preliminary competition held at two sites, one in the west in Austin, Texas, and one in the east in Jacksonville, Fla. Both events are held on the same day simultaneously, with the top 48 athletes in open events and the top 24 relay teams from each region competing for a top-12 finish to move on to the Finals.

The Gauchos will be represented by six female athletes and five male athletes who each will be competing in single events. They will be led by the efforts of seniors Maxine Goyette, in the 3000m steeple, and Matthew Kuskey, throwing the javelin, both of whom are making their second consecutive Western Regional appearances.

Goyette finished with her best time ever in the 3000m steeplechase with a mark of 10:28.43 while taking silver during the Big West Championships last week, which thereby moved her to third all-time at UCSB in that event. She is putting her best foot forward at the right time of the year, considering she will be squaring off against some of the best talents in the country. 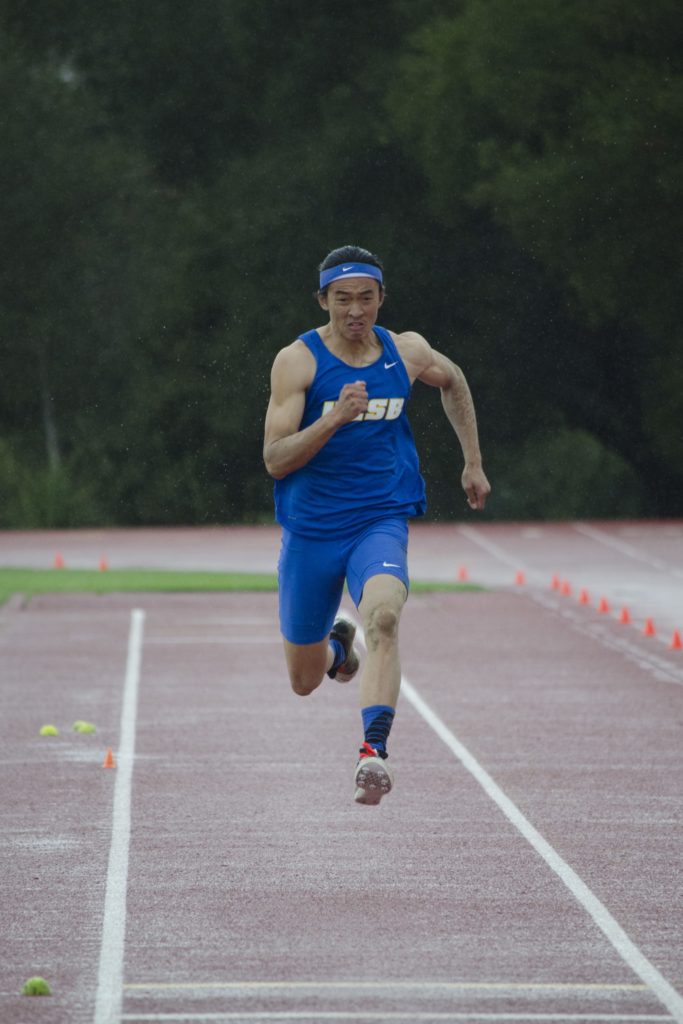 Hope Bender also set personal bests in both the women’s 400m and 100m hurdles last week at Cal State Fullerton. In just her sophomore season, she has moved into second all-time at UCSB in both of those events, and now she will be looking to build upon her early success in her first Western Regional appearance. She will be joined by senior Shannon Trumbull, as they both will represent UCSB in the women’s 400m hurdles.

Perhaps the most interesting athlete to keep an eye on would be junior Jenna Hinkle, who has consistently improved her finishing times throughout her career and is also coming off an astounding 2016 cross country season, during which she established herself as a national contender after finishing fifth in the Stanford Invitational with a time of 20:31.1.

She will be competing in the women’s 1500m after taking home gold for the second year in a row at the Big West Championships last week. Her PR of 4:16.67 last year is currently ranked No. 26 in the NCAA.

Senior Tori Usgaard has done it all for the Gauchos since joining the program four years ago. Her versatility includes competing in the heptathlon, long jump, high jump, 4 x 400m and 100m hurdles, which are just some of the ways she has contributed to UCSB’s success in recent years. She will compete in the long jump when traveling to Austin this week after finishing with a mark of 19-04.25 at the Big West Championships.

Concluding the women participants is senior Valerie Nestor, who, like Goyette, is peaking at the right time, considering she marked a personal best at the Big West Regionals with a 195-08 hammer throw. This will be her first time being invited to the Western Regionals in the hammer throw, and she has consistently made tremendous strides in her craft year after year to get to this point.

Senior Adam Avila will be the sole male Gaucho competing in a running event. After claiming Big West Silver in the 3,000m steeplechase as a sophomore, Avila earned gold while in Fullerton with a time of 9:00.43, helping the Gauchos take the top-two conference spots in the event. Using back-to-back sub-nine minute efforts in the event over the course of seven days, Avila qualified for the NCAA First Round with a personal best time of 8:59.40.

The remaining men’s track athletes will represent UCSB in throwing events, including senior Matthew Kuskey, senior Stephen Leach, junior Chris Ross and junior Kordell Hampton. In just his second season throwing the javelin, Kuskey qualified for the NCAA First Round in the event. He took home gold at the Big West Championships last week in the javelin with a throw of 218-08. He aims to return to the NCAA postseason and crack the UCSB All-Time list in the event. Ross will join him in the javelin at the Western Regionals after finishing second to Kuskey at the Big West Championships with a PR mark of 202-02.

Hampton, UCSB school record-holder in the discus, came within an inch of his best mark to grab Big West silver. The junior, on his second to the last throw, found his place on the podium and notched his second-best career mark at 181-01. This will be his first appearance in the Western Regionals.

Lastly, Leach will compete in the shot put after coming within a foot of his PR to score points in one of the deepest Big West shot put fields ever. Finishing eighth at the Big West Championships with a mark of 52-10.25, Leach looks to improve upon his achievements and be a formidable contender in the Western Regionals.

Competition begins Thursday, May 25, with the 400m dash and concludes Saturday, May 27, with the 4x400m relay. As mentioned, the top-12 contenders will advance to the NCAA Outdoor Track and Field Championship set to take place from June 7-10 in Eugene, Ore.