The Daily Nexus
Opinion
The Politics of Veganism
May 22, 2017 at 3:33 pm by Sebastianne Kent

Depending on who you talk to, veganism is either the social movement that will solve the world’s problems and usher in a new utopian society where humans and animals live in harmony with a flourishing ecosystem, or it’s an annoying dietary fad that’ll go the way of the Atkin’s diet. My experiences with the ubiquitous diet are manifold, and my motivations are mainly health and environmentally based. If I cook and eat without animal products, my skin is clearer, I have slightly more energy and I don’t have to feel guilty about the calories I ingest from beer or the tacos I eat by the half dozen with my friends. However, the all-or-nothing, restrictive, almost puritanical cultishness behind what should be a change that makes you feel good about yourself and your mitigated impact on the planet makes this regime seem more like a four-letter word. Because of the privilege and judgment that can sometimes rear its ugly head in classes like “vegan lit” (which I’m currently enrolled in), I choose not to identify as a vegan at all.

The class is a comparative lit course that necessitates discussion. I find myself having to rein in the comments that constantly spring to mind over questions such as “Do plants have feelings?” It seems like a course-wide pity party that discusses all of the ways in which vegans are put upon by meat eaters and the fierce arguments for a plant-based diet. This is not to say the attitudes sometimes exhibited in the course are representative of all vegans, nor do I think all meat-eaters are defensive in their consumption of animal flesh. In fact, I think politicizing diet is an unfortunate by-product of an age where everything has a series of wider implications that cannot be avoided, and it results in a hailstorm of guilt and finger-pointing. 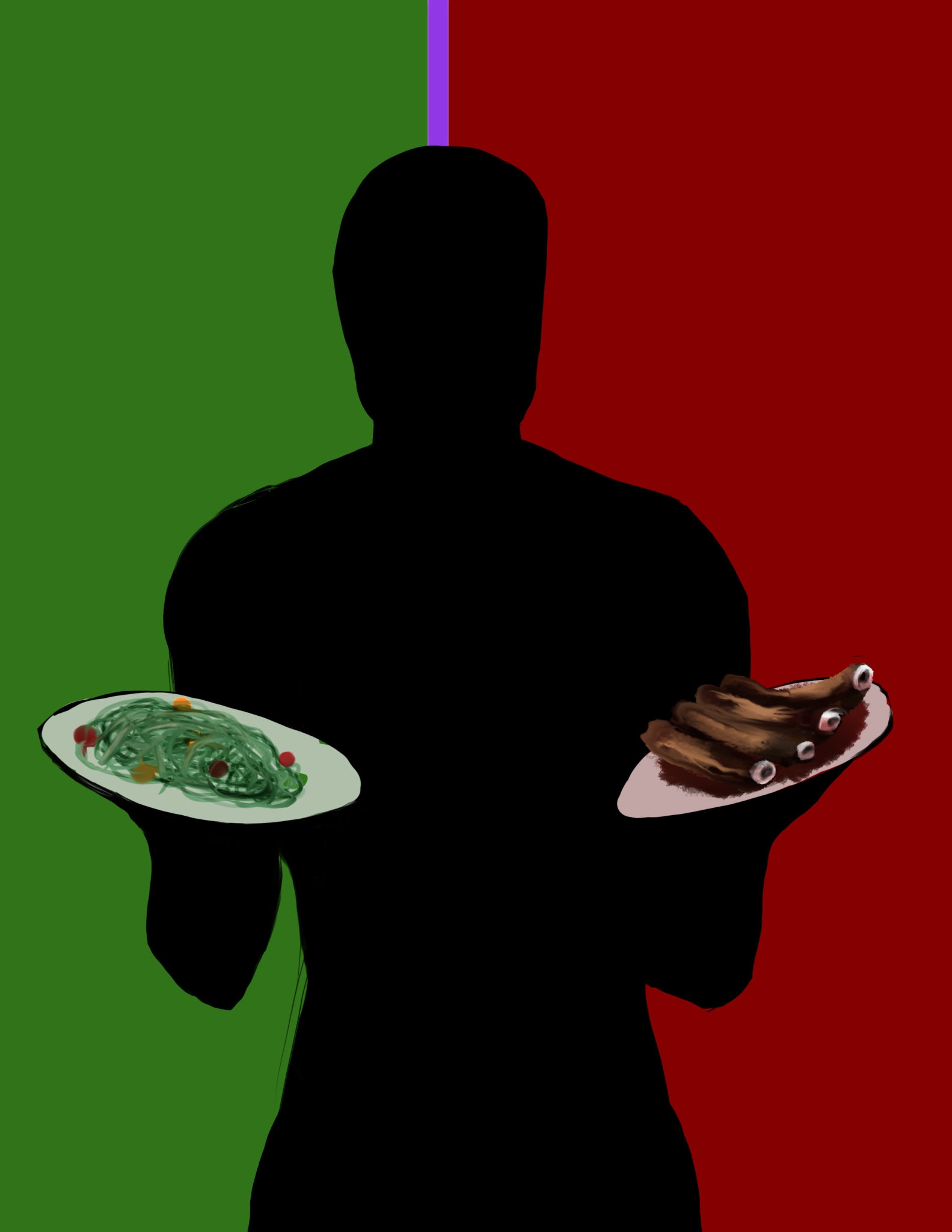 Coming from the perspective of environmentalism and sustainability makes it easier to sit back and analyze the confusion. A plant-based diet saves about 600 gallons of water per capita, daily. That is enough of an impact to mitigate any guilt I have about killing cute and fuzzy animals. I’ve also seen chickens slaughtered and eaten them anyway, so I’m confident in my ability to confront the real source of meat as opposed to fooling myself into pretending the hermetically sealed packages in the supermarket were never alive. The focus on animal ethics is one of the factors that makes this argument so personal. People who eat meat are called murderers. Well, to some extent, we all are if we live in developed countries. Every bit of privilege we have is built on the backs of someone in another country, and no amount of fair trade buying will change that. I don’t think it’s inherently right or wrong to eat animal products; we’re clearly evolved to have at least the option, whether or not we decide to pursue it.

In fact, I think politicizing diet is an unfortunate by-product of an age where everything has a series of wider implications that cannot be avoided, and it results in a hailstorm of guilt and finger-pointing.

However, the extent to which we consume meat — every meal for some of us — and the way in which animals are raised is not only morally repugnant (in the case of animal husbandry), but it is also extremely harmful to our planet and to human health. I think this is the root of the problem, and guilting someone into a diet (no matter how beneficial it may be) will never be effective.
I have yet to even touch on the fact that college-aged women who eat restrictive diets have much higher rates of eating disorders. It’s almost no wonder, with the diet’s link to fitness and the association of an act so simple as eating linked with cheating. I remember telling a friend I had eaten a hamburger on a drunken night, and she literally gasped. With that reaction, who wants the stigma?
I’ve decided the most effective way of avoiding controversy is to identify as vegan-ish. I have a co-op membership I use happily, and I take pride in buying fair trade whenever I can. However, this privilege comes from the fact that I am a student lucky enough to have multiple jobs and no children or family to feed with picky diets or cravings for dino nuggets. (That’s what kids eat, right?) Yes, it can be cheaper to eat a plant-based diet, but that requires the planning and access to healthy and whole foods that not every American has, and the privilege behind assuming this is currently a feasible choice for everyone is part of the reason I often leave class feeling disheartened and painfully aware of the demographics of UCSB.

At this point, veganism is a concept surrounded by controversy. To utter it is to invite speculation, comments on the most personal of activities and judgment. I believe people, in general, do want to make a difference, and I don’t want to be actively judged. Even so, to politicize every bite is as unhealthy as eating a triple cheeseburger every day. Instead of focusing on what people are eating, let’s expand education on the choices we have and make sure that all of those choices are as healthy for the planet and its inhabitants as possible.

Sebastianne Kent wants you to have fun eating your veggies!

Few will deny that most Americans consume too many calories–meat and dairy products included. We also consume far too many unhealthy plant-based products such as chips and cookies. Vegan or not, many of our preferred foods contain far too much sugar and oil. Most of us would be better off if we consumed more whole plant foods, as would our environment. But, this is not to say that the elimination of all meat from one’s diet is good for health, or for the environment. Just as the health of many non-vegans suffers from insufficient plant intake, many vegans suffer from… Read more »

Veganism is good for our health and the environment, but is actually a philosophy and a way of life that seeks to avoid, as much as is practicable, use and harm inflicted on animals. In other words, it’s not a diet, much less a fad diet; and it’s not about your health or the environment. Again (and again and again and again), it’s a moral position and corresponding way of living that respects animals’ interests as far as is practicable. If people would simply acknowledge the facts in the above paragraph, there would be a lot less confusion about vegans… Read more »

Once you guys find a way to ensure that Americans living in food deserts (predominately people of color) have access to an affordable and organic green diet then you can actually call yourselves a moral cause, cause right now it seems to just be a lot of privileged people patting themselves on the back for being able to eat a certain way

Ah, yes, typical ignorance and fallacious reasoning from “Anonymous”: False premise #1: Food deserts are the fault of vegans. The truth is that food deserts are the fault of our economic and food systems generally, which are run by anti-vegans and nonvegans. But even if it were true that food deserts were the fault of vegans, it does not follow that animals must be unnecessarily and intentionally bred, exploited and killed. False premise #2: Animal products are cheap food for the poor in food deserts. Actually, animal products are subsidized by the government with about $80 billion annually. Without the… Read more »