Following the Associated Students Senate’s failure to pass the resolution to divest from companies that allegedly aid Israel in human rights violations against Palestinians, UC Santa Barbara is the last University of California campus to have not yet passed a divestment resolution. 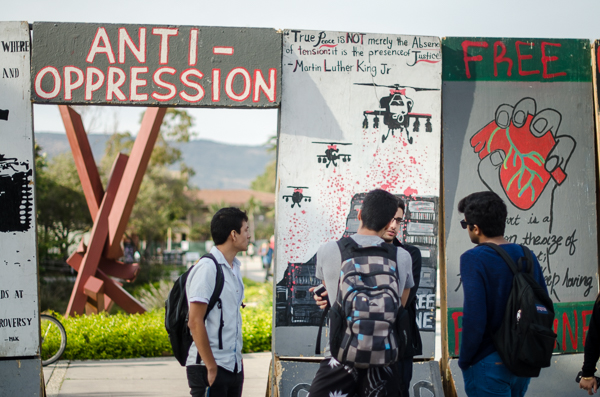 The resolution received 16 “no” votes, zero “yes” votes and seven abstentions after a 10-hour meeting in Corwin Pavilion on May 10.

The resolution, sponsored by Students for Justice in Palestine members Anumita Kaur and Edan Tessema, called for the university to divest from companies such as Raytheon, Northrop Grumman, Caterpillar and Hewlett-Packard, which allegedly perpetuate human rights abuses of the Palestinian people.

A resolution to divest was first proposed at UCSB in 2013 and has now failed to pass four times.

The first divestment resolution was proposed at UC Berkeley in 2010, where it passed through the student government but was later vetoed by then-student president Will Smelko. The latest resolution passed in 2015.

The UC Board of Regents released its “Principles of Intolerance” last year, a statement condemning anti-Semitism and anti-Zionism on UC campuses. In 2010, the Regents’ chairman, vice chairman and UC president released a statement saying they will not divest until the U.S. government declares that the foreign nation is “committing acts of genocide.”

UCSB was allegedly the last of the UCs to vote in 1978 to divest from companies with business ties in South Africa during apartheid. The UC Regents voted to divest from the corporations in 1986.

Kaur, a fourth-year sociology major, said she sees similarities in the South African divestment history and the current debate with Israel and Palestine.

“For the fourth time in a row … UCSB is on the wrong side of history,” Kaur said. “I think that consistently UCSB’s Associated Students is choosing to remain complacent and complicit in violence.”

Rabbi Evan Goodman of the Santa Barbara Hillel said the Israel-Palestine conflict is a “complex situation” and said he commends the Senate for “not following the path” of other student senates to vote to divest.

Goodman said, however, that the eight other UC student governments that voted to divest are not representative of the current student bodies of those campuses because students, interests and motivations have changed since they voted to divest.

“It’s a misnomer to say that all are voting to divest,” Goodman said. “They have each voted at a moment in time to do this.”

According to Hillel International, UCSB has a current Jewish population of 2,850 students or 14 percent. This number is higher than on any other UC campus.

Goodman said the large Jewish community at UCSB is a bonded group, and he cited the “UCSB Jewish Student Organizations’ Unified Opposition to BDS” unity letter as a sign of the collective efforts and ideals of the Jewish student population.

Eight Jewish student organizations signed and released the letter last week in response to the divestment resolution and the Boycotts, Divestment and Sanctions (BDS) movement.

“Judaism is much more than a religion; it is a people,” Goodman said. “Israel plays an important role in the sense of Jewish peoplehood.”

Kaur said she believes the resolution did not pass because there is a “lack of diversity” on Senate that she claims is due to the one-party dominance in A.S. elections. She said this results in similar ideologies running across the whole Senate.

“We consistently see just one party sweeping our election,” Kaur said. “You can’t have a real democracy when it’s always one party that has the monopoly.”

Despite supporting opposite positions of the divestment debate, Kaur and Goodman both said they believe students need to fully educate themselves about the Israel-Palestine conflict.

“There is a genuine [and] deep lack of understanding of what this divestment resolution is really about,” she said.

Goodman said he does not believe UCSB will ever vote to divest but said he dislikes the way two different sides have emerged surrounding the debate.

“I hate the idea that there is a winner and a loser here,” Goodman said, adding that he believes UCSB’s student body is willing to engage in contentious dialogue instead of only “trying to pick a fight” with one another.

Chancellor Henry T. Yang did not comment on the university’s position on divestment but said it is the university’s “role and responsibility” to create a space where students can discuss controversial topics.

“I so appreciate seeing our students engage in such a thoughtful and passionate discussion on this issue as well as others,” Yang said in a statement. “Listening to and learning from each other are among the great benefits of being part of a diverse campus community represented by a variety of perspectives.”

It would be helpful if the author clarified what “party” has a “monopoly” on the election process/democracy of the AS. I wasn’t aware the SA was structured into political parties. I think such clarification would put Kaur’s comment into context, because either such party politics exist, in which case that just reflects the position of the population (indicative of a functioning democratic process), or there is no actual political party, in which case Kaur is referencing age old anti Jewish conspiracies of Jews secretly having unyielding power and control. The use of the word monopoly in describing what I think… Read more »

So now that they lost the vote, are they going to go away forever and never ask again?

Antisemitism, just another reason I hang up on those soliciting funds for UCSB.

Candidates for AS usually run as part of “parties” so it can be said AS is structured along political party lines. The “parties” tend to take positions on particular issues. As for divestment, it is an utter waste of time to go to AS Senate. The reality is that votes like these are symbolic and aren’t binding on campus administration or the UC system itself. The Regents make these decisions and so far they don’t support divestment specifically or the larger BDS movement in general.