The Daily Nexus
Previews: What's Going On
Extravaganza ’17 Coming to Harder Stadium Sunday
May 18, 2017 at 4:10 pm by Ryan Song

With the official lineup already announced, UCSB’s A.S. Program Board will hold its 38th annual Extravaganza festival this Sunday at Harder Stadium all day, from 1-7 p.m., with headliners Schoolboy Q, Tinashe and GRiZ.

For its almost 40-year run, Extravaganza has been highly popular among students at UCSB. The festival originally consisted of mostly local musical acts. However, as the event started to rise in popularity, various famous musicians came to Santa Barbara for a slot in the event. Some of the more notable musical acts in the past few years were Drake in 2010, Kendrick Lamar in 2013 and Rae Sremmurd (who only got to play at the concert because it wasn’t shut down early) just last year. Apart from big-name artists, the festival also brings in lesser-known names in music to provide smaller-scale performances to the audience. Chance the Rapper came to Extravaganza in 2014, two years before he caught the attention of the public with Coloring Book, and Anderson Paak performed last year before he was recognized by the Grammys with a nomination for Best New Artist.

Even though I have listed mostly rappers as examples of musical acts, A.S. Program Board has, in actuality, brought musical artists from a wide array of genres ranging from rock to hip hop to electronic. With this variety of genres, this spring festival has become so popular it has even been sponsored by many corporations. Last year’s Extravaganza was sponsored by StudentUniverse, Guayakí and KIND Snacks. Despite it being a popular concert, there were many criticisms concerning opening the doors to those who were not UCSB students. Because of this, as well as rising costs, A.S. Program Board made Extravaganza exclusive to UCSB students only in 2011.

At one point, the Program Board decided to include two stages. However, the idea was cancelled in 2005 to make way for bigger-name acts. To mark the event’s 29th anniversary, Program Board decided to shift the time of the festival from day to night. So on May 16, 2009, the gates opened at 3 p.m., and Ludacris, the headliner for that year, ended his act at midnight. A high-quality screen was placed nearby the stage to let the back rows see the acts better. At some point, A.S. Program Board even asked people to submit short films that would be played between musical acts.

Now, here’s some practical information for the day of the festival. 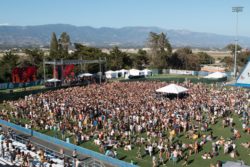 To accommodate the large-scale setup of the event, Extravaganza takes place at Harder Stadium. The stage is located at the center of the stadium. There will be both student and professional vendors on either side of the stadium that will serve food, as well as an info booth that will sell merchandise. Students will be seated on the bleachers of the stadium. The following will be prohibited at the festival: objects such as glow sticks, fireworks, lasers, skateboards, bottles, cans, knives, alcohol, illegal substances, wallet chains, recording devices, backpacks, large bags, hula hoops and projectile items; and actions such as stage diving, crowd surfing or moshing. If a student is caught violating these rules, they will be removed from the event.

After Artsweek and the entire UCSB campus received news of the first three artists playing at Extravaganza, two more supporting acts were announced: Twin Peaks and Thundercat. Cadien Lake James, Clay Frankel, Jack Dolan and Connor Brodner make up Twin Peaks. They formed their band and went out on a tour during their senior year of high school. In fact, their first album, Sunken, was cheaply created to pay for any gas or beer on the road. The album caught the attention of Autumn Tone Records, which released it in the summer of 2013. Their decision to drop out of college proved a good choice for them, as their second album, which they began working on after making this decision, was successful. Croom joined the band on the keyboard for their third album Down in Heaven, which drew inspiration from the 1968 works of the Rolling Stones, The Kinks and The Beatles.

The other artist announced is Stephen “Thundercat” Bruner, a bassist who has worked with artists in black vanguard music. As a member of a musically talented family, Bruner’s music career began when he joined the band Suicidal Tendencies in high school. With an interest in the L.A.-led movement of black genre-mixing music, Bruner began to work with many different creators. The most prolific turn in his career came when he began working with Flying Lotus for 2010’s Cosmogramma. Some of the more well-known songs he was featured on were Childish Gambino’s “II. Shadows” and Kendrick Lamar’s “These Walls.” Bruner’s own first album, The Golden Age of Apocalypse, was released on August 29, 2011, with a favorable reception from the public.

With Spring Quarter nearing its final weeks and the school year coming to a close, Extravaganza will most likely be a large event that will attract many students anticipating this spring festival A.S. Program Board spent countless hours preparing for.