The Daily Nexus
News
Playful Wisdom: Go Club and Its Quiet Success
May 11, 2017 at 12:33 am by Tamari Dzotsenidze 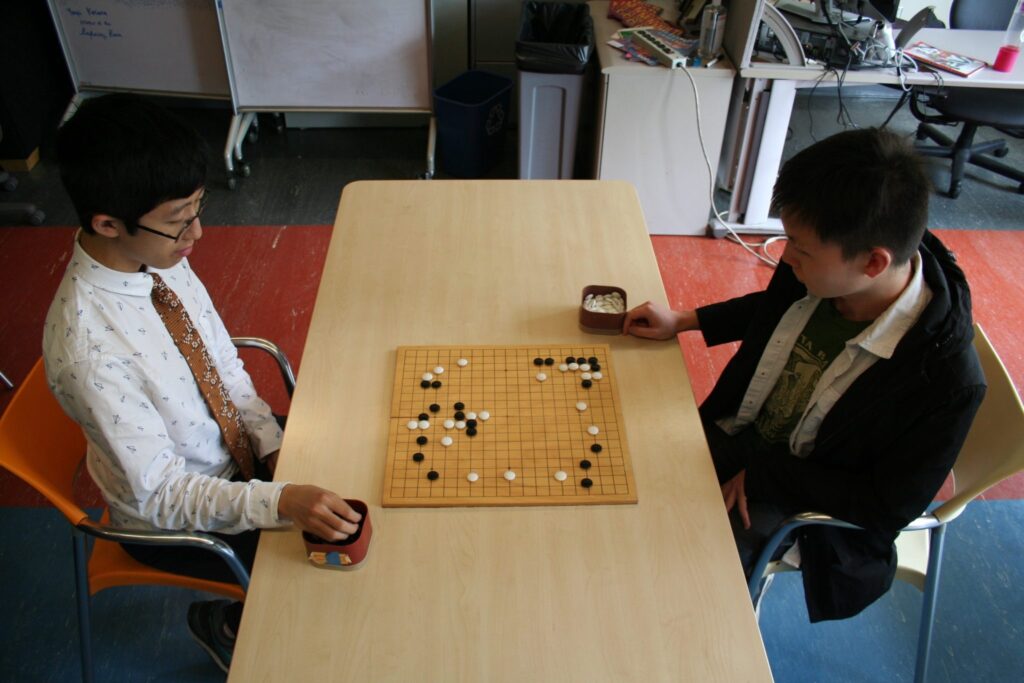 Current club president Rex Luan (right) faces off against Stephen Hu (left) in a match of Go, a game created in China around 2,500 years ago. In April, both Luan and Hu leed UCSB’s Go Club to a championship victory in the last round of the Collegiate Go League. Hu is set to be president of the small but successful club next year. Tamari Dzotsenidze / Daily Nexus

Facing off against each other, Rex Luan and Stephen Hu, current and future president of UC Santa Barbara’s Go Club, sit in perfect contrast.

Playing with white stones and clad in black, Luan sits quietly and seriously, contemplating his next move. Wearing a patterned shirt and a Go tie, his partner looks at me and grins.

“When Rex gets into the game, his face gets red. The redder he is, the better he plays,” Hu says.

Though small in numbers, UCSB Go Club makes up for it with heart.

Luan was only six years old when he was first exposed to Go, and for him it was love at first sight. He began spending four hours a week in lessons with a professional player, reviewing games and practicing with fellow students.

It was this dedication that led the Go Club to victory this April.

Along with club member Justin Shieh, Hu and Luan made up the team that narrowly defeated the University of Toronto and claimed victory in the final round of the Collegiate Go League.

Both Shieh and Hu have similar origin stories. Hu was first introduced to Go when he was four. He said an elderly cook at his kindergarten in Beijing was the first to teach him the game, and he then began playing with his father.

Shieh, who was first exposed to the game in Mandarin school at the age of eight, said he fell into it almost “by accident.” He said he started playing around the age of nine or ten and played seriously for nine years.

Go originated in ancient China, and, according to the club members, is easy to learn but difficult to master. Although the game may seem simple, with a wooden board and black and white pieces, its appearance is deceiving.

According to the American Go Association, it is “the most complex of all games.”

Google recently developed an artificial intelligence system called AlphaGo that was able to beat one of the top ranked Go players. In two weeks, it will take on the highest ranked Go player in the world, Ke Jie.

Not only has AlphaGo made a splash in the international Go community, but it has also inspired Luan, a computer engineering major, to share his love of the game and continue learning about the mathematics behind it. 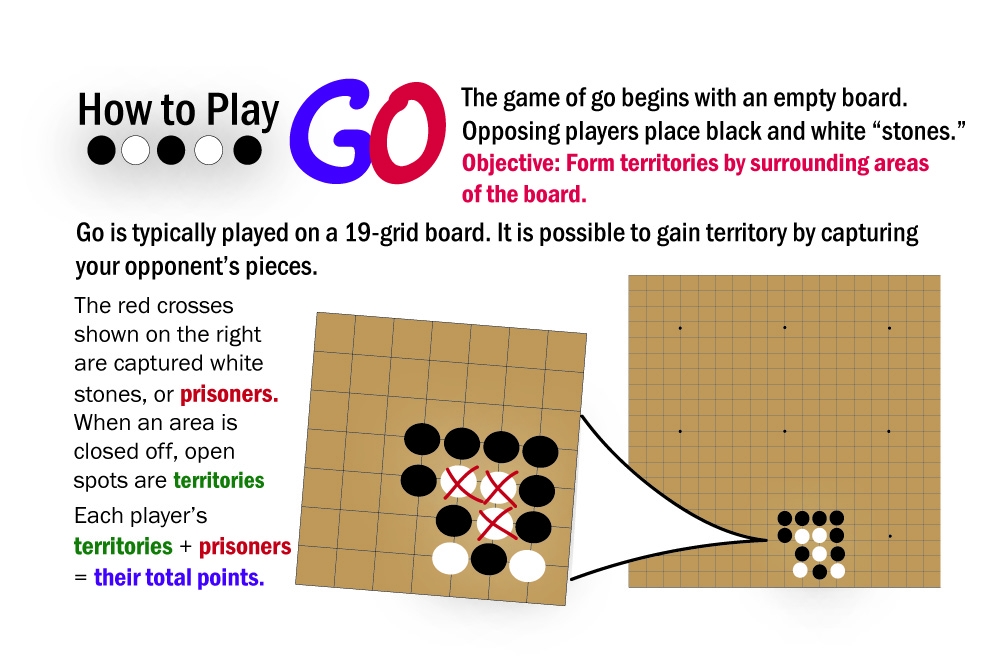 Beyond algorithms, Go also inspires passion within the club members.

Shieh said his demanding work schedule often prevents him from attending meetings and limits his ability to practice, but he still plays with the Go Club because of the team’s friendship.

For others, the love of the game extends past the fun and competition and relates back to real life.

“I just think that Go has so many parallels to life; it has many metaphors,” Hu said. “In the global sense, you have to give up something, and this relates to life. You have to give up maybe what’s less important in the moment and just focus on what’s larger. And it hurts to give up things, it really does, but sometimes you have to.”

This love and fascination with Go manifests through continued practice. Hu plays one game a day, averaging around an hour and a half per game.

Despite the time commitment and preparation for competition, however, the road to victory was riddled with challenges.

The team is split into different “boards,” with the strongest player playing the first board. For Hu, this posed significant challenges due to the high skill level of players from other schools.

When competing against UC Berkeley, Hu said he faced off against a professional player, which proved to be an intimidating task.

“With Go, there’s no luck; if you lose, that means you have certainly done something wrong,” Hu said. “You just played unfavorably compared to your opponent … I didn’t feel too bad because I was playing a pro, and I don’t spend all day playing this game.”

“But then again, I really felt during those weeks it was comradery and team spirit that really carried us through,” Hu added, showing the club’s sense of togetherness that has developed through days of practice.

Described by Hu as a “dark horse,” UCSB’s Go Club was not expected to win the competition. It ranked fifth after the normal season, but after a months-long campaign that began in October, a narrow victory by Shieh clinched their two-to-one victory over University of Toronto.

“It came down to the last move,” Hu said. “I felt surprisingly calm after that. I wasn’t, like, too ecstatic. The previous night, I thought that if we won this I would like erupt with a cheer, but I didn’t. I guess, at the moment, I just couldn’t take the enormity of that.”

With Shieh and Luan graduating after this quarter, the future of Go Club remains uncertain. With fewer than 10 members regularly attending meetings, forming a team remains a challenge.

“It’s not a popular game by any means,” Shieh said.

Yet poised to take over as president, Hu said he is not worried about the amount of members the team will have in the future or protecting its title.

“With every club, people graduate, people come and go … including myself,” Hu said. “If we win it next year or have a good result next time, then it’s going to feel good. But the first chance we got is really the most memorable one, and we seized it.”

A version of this story appeared on p.5 of the Thursday, May 11, 2017, print edition of the Daily Nexus.

I’m Rex Luan, president of Go Club. Our club hosts meeting on every Thursday 7-9pm at SRB, Asian Resource Center. Welcome to our meeting and learn to play Go. Check out our club website: https://www.facebook.com/groups/ucsbgoclub/