The Daily Nexus
Sports Blogs
Heir to the Throne: Why Giannis Will One Day Usurp LeBron
May 11, 2017 at 5:07 am by Richard Benites

Greece Lightning, The Greek Freak, Giannis “The Alphabet” Antetokounmpo; these are only a few of the nicknames bestowed upon Milwaukee’s 6’11’’ small-forward-turned-point-guard.

All year long, teams across the league had trouble trying to stop Giannis Antetokounmpo on both ends of the court. And we’re not talking about offensive and defensive ends. Literally, Giannis has proven he can go from coast to coast on a full-sized basketball court in only two dribbles. Seriously. 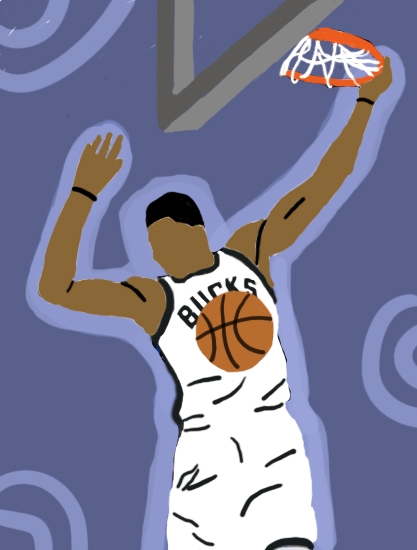 With a seven-foot wingspan and better handles than the average NBA point guard, monikers aside, Antetokounmpo truly is a basketball freak.

Born on Dec. 6, 1994, Antetokounmpo was only 18 years old when he was drafted by the Milwaukee Bucks, making him the youngest in the 2013 NBA Draft.

However, his rise to stardom started inside of Greece’s second division basketball league. Here he managed a 9.5 points and 5.0 rebounds per game average over 26 total games for Filathlitikos, which sparked conversation as his potential began to be noticed. Spanish clubs like Barcelona and Zaragoza then began to show their interest in him and touted his prodigious ability.

Regardless, Antetokounmpo remained in Greece until the conclusion of the 2012-13 season. His next move was then perhaps the wisest decision of his life: become eligible for the NBA Draft. Then the rest was history.

Well, not exactly history. Presently, Antetokounmpo is respected and perhaps even feared by his peers, but let’s look at the early moments of his professional career.

Following his first round, No. 15 overall selection by the Bucks, Antetokounmpo gradually made an impact on the court. In his first three NBA seasons he averaged 12.1 points, 3.0 assists and 6.3 rebounds per game. Not particularly standout numbers, however, he earned enough accolades along the way to promote his projection toward greatness.

In his rookie year, he totaled 61 blocks which led all rookies in the NBA, thus earning himself a spot on the All-Rookie Second Team roster. His physical prowess was first recognized during his sophomore season when he was invited to participate in the NBA Slam Dunk contest. Later that year, Antetokounmpo also helped his team achieve its first playoff win since its 2009-10 campaign. In just his third season, he etched himself into Milwaukee Bucks history with the most triple-doubles in a single season.

“It doesn’t look like he’s sweating or even breathing hard,” Bucks Head Coach Jason Kidd said when interviewed about Giannis’ play, “and that shows just how talented he really is.”

Over the years, Giannis has received similar praise from his idols like Kobe Bryant and Allen Iverson; however, none as directly valuable as from the King himself: LeBron James.

“A guy that can handle the ball at that size is special … at that speed, with his length. I think J-Kidd does a great job of placing him in the lineup where he sees a mismatch, and so he’s all over the floor.”

This quote not only puts Antetokounmpo’s young and outstanding career into perspective, but also brings us to his comparisons with LeBron, currently the best player in the game.

Yes, best player in the game. Sure he may not be in MVP contention amongst the names of Russell Westbrook and James Harden; but no one else can match LeBron’s level of speed and power. Well, perhaps Antetokounmpo will one day.

The two also started side by side in the 2017 NBA All-Star Game as members of the first team roster. When the Cavaliers visited the Bucks back in November, Antetokounmpo led his team to a 118-101 victory after scoring a total of 34 points, 12 rebounds, five steals, five assists and two blocks all whilst being matched up with LeBron. The two later acknowledged each others efforts with a respectful post-game hug, but from watching that game one can tell how special Antetokounmpo will be.

As for the remainder of Giannis’s season this year, he scored a career high of 41 points in a February game against the Lakers, became the youngest All-Star in franchise history and, most especially, led his team in all five of the major record categories: points, rebounds, assists, steals and blocks.

Altogether Antetokounmpo’s athletic skills and raw talent can only pose a resemblance to LeBron’s. Each player has a unique capacity to strike panic into opponents when they’re headed toward the rim with both size and speed.

However, it can be understood that in both statistic and legacy, Antetokounmpo has a while to go before catching up to LeBron. Although, he still has plenty of time to do so as he’s only 22 years old.