Despite falling behind 3-0 after giving up a home run in the third inning, junior left-handed pitcher Kyle Nelson rallied to allow just three hits and no runs over the last six innings to help the UCSB baseball team earn a 6-3 victory at Caesar Uyesaka Stadium over UC Davis.

“He did a great job of bouncing back and being himself,” Head Coach Andrew Checketts said. “His competitive spirit kicked in late in the game and he was able to ride that.”

The win lifts the Gauchos to 20-22 overall, 6-7 in the Big West. The victory was Checketts 200th win of his career, making him the second-fastest coach to reach that milestone in program history and the fourth coach to reach that overall. UC Davis is now 13-24 on the year and 5-11 in the conference.

“He did a really great job with two strikes,” Checketts said. “He had a really nice day at the plate and at second base. He has been a pretty mature baseball player ever since he arrived on campus.” 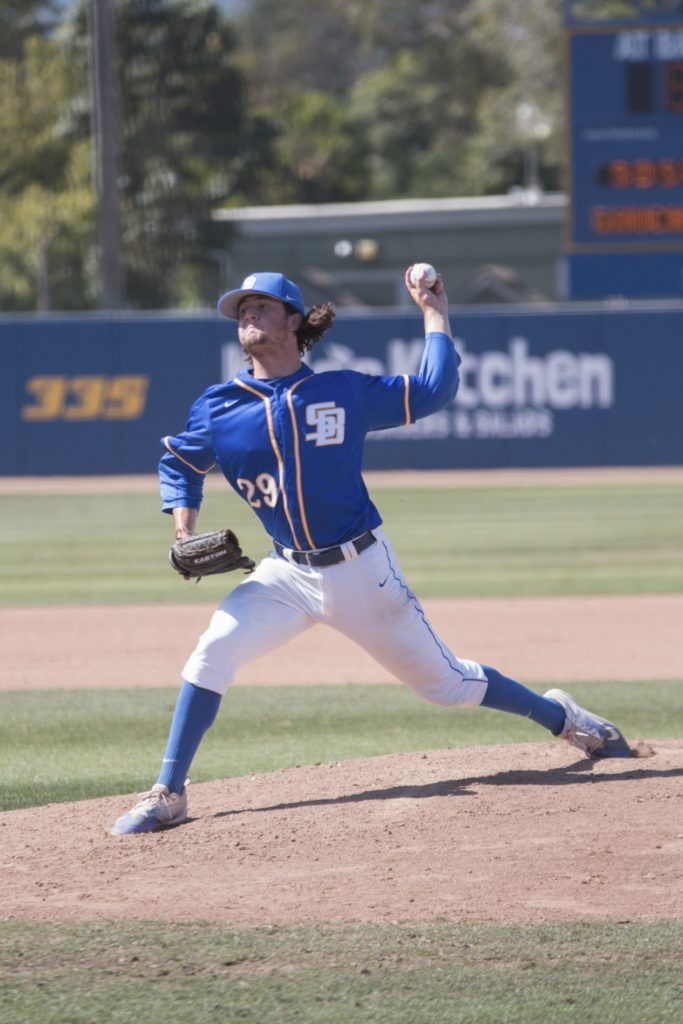 UC Davis opened the scoring in the third inning after two crucial mistakes by Nelson. First, redshirt senior catcher Elijah Ontiveros reached on an error by the left-hander, then Ryan Hooper was hit by Nelson’s pitch putting runners on first and second.

After a bunt to advance the runners, sophomore Ryan Anderson lit up the scoreboard hitting a home run to left field for his fifth homer of the year to help his team take a 3-0 lead through three full innings.

Santa Barbara would respond in the third inning with a four-run rally which began with a single from redshirt senior catcher Dempsey Grover who would eventually score after a sac fly from junior shortstop J.J. Muno.

With two outs in the bottom of the third inning, Smith came to the plate with a bases loaded situation. The freshman delivered with a three-run double to right field making the score 4-3 in favor of the home team, a lead it would not give up for the remainder of the match.

The Gauchos added an insurance run in the bottom of the sixth after Muno, reached on a fielder’s choice then stole second after a failed pickoff attempt from the Aggies’ starting pitcher, redshirt junior Orlando Razo. After a throwing error which allowed Muno to take third, sophomore third baseman Tevin Mitchell brought in the junior with a groundout RBI.

UCSB’s final run came in the bottom of the seventh inning after Smith hit a shot past the net in left field for a one-shot home run, the second of his young career, to make the score 6-3 through seven full innings.

Nelson, despite getting into some trouble in the eighth and the ninth, kept delivering the crucial outs to help his team get the victory. The junior picked up his first complete-game finish of his career and his sixth win of the season after allowing six hits, three runs, two earned, but managing to strike out six batters.

“He looked tired at the end but I think it was more him being a bit too catious than anything else,” Checketts said. “When we got the lead, he got some quick outs and in the ninth, those three outs, that’s why they pay guys a lot of money to get those final outs.”

One of the best things about this win was the fact that the Gauchos were able to again rally. This team has shown signs of being a winner all year but has failed to live up to its expectation. Now, maybe this entire team is ready to rally.

Due to whether inclinations, UCSB and UC Davis will be playing in a double header tomorrow meaning, that the home team, with two wins tomorrow, will not only complete a sweep of a conference opponent but be .500 overall and own a winning Big West record giving them the confidence it needs heading forward.

Santa Barbara faces Davis at 11:30 a.m. on Saturday, May 5th at Caesar Uyesaka Stadium. Game two of the doubleheader will take place 30 minutes after the conclusion of the first game at the same location.