During finals week of last quarter, the UC Regents, who control $90 billion worth of investments for the entire University of California system, quietly divested $150 million from Sunoco and Energy Transfer Partners, two companies responsible for building the controversial Dakota Access Pipeline (DAPL).

“Social pressure” and “de-risking” were amongst some of the main reasons for divesting from the two fossil fuel corporations. However, the hypocrisy of our world-renowned public university system that continues to exacerbate the climate crisis by investing in fossil fuel companies while simultaneously trying to achieve carbon neutrality by 2025 is truly mind-boggling.

The success of all of our efforts toward building a sustainable future is undermined by the UC’s investments in fossil fuels. UC campuses claim to be some of the greenest of the public universities, offer courses on climate change, environmental justice and indigenous people’s sovereignty and are world leaders providing cutting-edge research on sustainability. As the struggle over DAPL became both controversial and political, so did the UC’s investment in the pipeline, causing the Regents to divest. 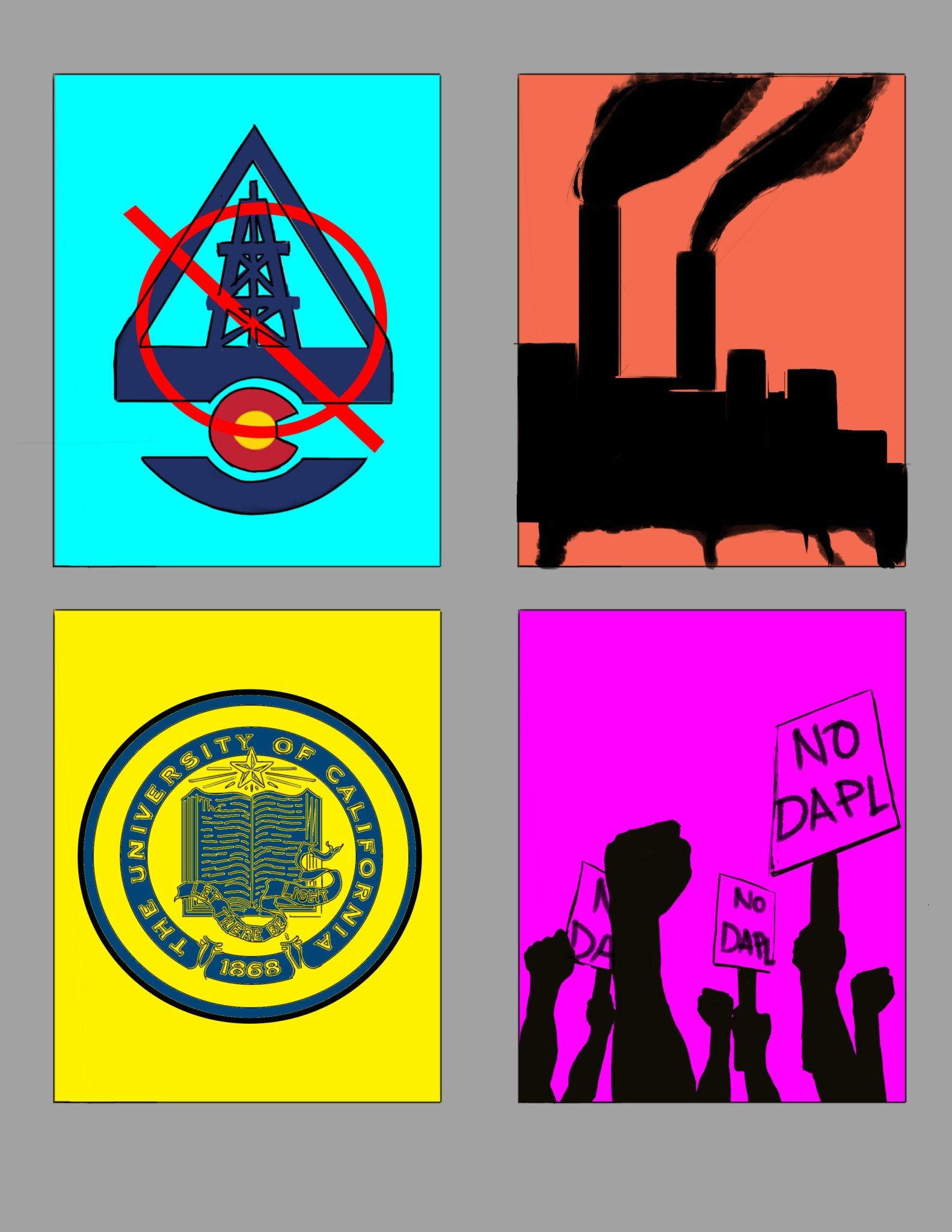 We need our Regents to go further; DAPL was the most obvious example, but it’s far from the only one. Wherever there is fossil fuel extraction, there are environmental injustices. Something has to change, and, slowly but surely, the tide is turning away from fossil fuels and toward clean energy that works for everyone. On a global scale, the fossil fuel divestment movement has shown no signs of slowing down, as institutions like the Rockefellers Brothers Fund and cities from Berkeley to Melbourne have collectively pledged to divest $5.5 trillion worth of assets from fossil fuel corporations.

When it was learned that the UC was directly investing in the DAPL, tensions boiled over across UC campuses, resulting in protests, acts of solidarity with indigenous peoples, petitions to divest and even a coordinated UC-wide call-in disrupting phone lines at the office of the Regents. Perhaps it was all the “social pressure,” or perhaps it was the risky nature of investing in fossil fuels as renewable sources of energy become cheaper. I’d like to think it was a combination of both that caused the Regents to divest another $150 million from fossil fuel companies.

Although the UC’s pledge to divest from Sunoco and Energy Transfer Partners wasn’t enough to completely halt or even slow the construction of DAPL, it still serves as a small victory for the divestment movement. It’s estimated that the UC still has roughly $2.6 billion invested in fossil fuel corporations. However, if we can learn anything from this, it’s that the Regents are both susceptible to social and environmental pressure and are beginning to comprehend the growing economic risk of investing in fossil fuels. The UC wants to continue to maintain its pristine image as leaders in the world in terms of higher public education and sustainability.

Something has to change, and, slowly but surely, the tide is turning away from fossil fuels and toward clean energy that works for everyone.

Consequently, it’s no wonder you never knew that we, (yes, we, our tuition), were funding the DAPL in the first place or that you never heard that we just recently divested, or perhaps even that back in 2015 the UC announced a $200 million divestment of all coal and tar sands investments. It’s crucial that we as students, faculty and staff hold the UC responsible for the values it claims to uphold.

Far too often, students underestimate the power we have on our own universities and fail to question the status quo. $2.6 billion is a daunting number, I know, and getting the UC to fully divest from all fossil fuel investments seems like an even more daunting task, but during the week of May 8, Fossil Free UC is aiming to change just that, holding our biggest action of the year. We hope you will join us. In the words of Rage Against the Machine’s Zack de la Rocha, “It has to start somewhere, it has to start sometime, what better place than here, what better time than now?”

Grady Zant wants you to remember that we have the power to influence the UC. For more information about our campaign, please like us on Facebook and Instagram.

“Although the UC’s pledge to divest from Sunoco and Energy Transfer Partners wasn’t enough to completely halt or even slow the construction of DAPL, it still serves as a small victory for the divestment movement.”

There ya have it, divestment does not work nor does it aid in stopping climate change. The shares will be bought up by other entities and fossil fuel companies will feel no financial effects.

The biggest hypocrisy is that the UC system continues to exacerbate the climate crisis by serving animal products on campus, when over 10 years ago the United Nations published an extensive report on the environmental effects of animal agriculture (“Livestock’s Long Shadow”). Fossil fuels are not the biggest issue, as this report found that animal agriculture has a greater effect on climate change than the entire transportation sector.

Please yes do try and force veganism on everyone. Go right ahead. Try it. Do.