The Daily Nexus
Opinion
The Lies Behind the Label: Deception in Food Marketing
May 4, 2017 at 5:00 am by Ketia Johnson

As information is released on how animals are treated on factory farms, more people have turned toward products labeled as “organic,” “free range” and “certified humane.” People are paying extra to have peace of mind when consuming these animal products. UCSB students dine at Root 217 in the UCen, which offers “grass-fed” and “sustainable” beef as well as “organic” and “free-range” chickens. Unfortunately, the conditions the animals are kept in and the way they are treated are far from compassionate.

Legally, there is no definition of “humane“; therefore, farms and producers decide what practices they deem to be “humane” (humanefacts.org). The United States Department of Agriculture then verifies that the company is following the standards they set for themselves. This leads to companies and producers having different requirements for what is considered “free-range” and “humane.” 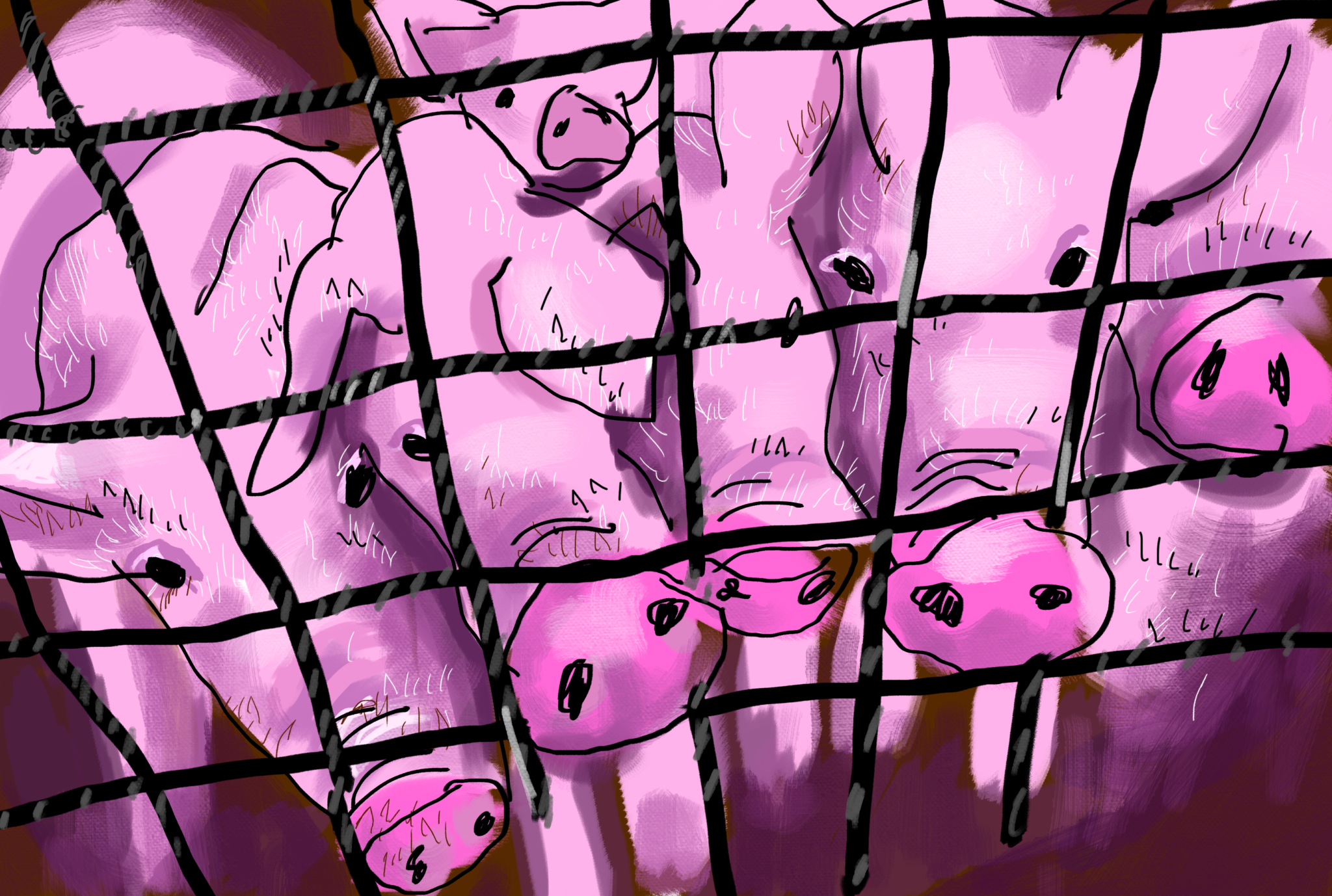 An example of such deceptive marketing can be seen with Niman Ranch. It states its pigs are raised humanely on sustainable farms (NimanRanch.com). Their labels state the pigs are raised “outdoors or in deeply bedded pens” (humanefacts.org). A field representative from Niman admitted to a writer from Mark’s Daily Apple that over 75 percent of the pigs are kept in warehouse-style buildings with straw on the floor. The use of “or” in their label allows them to confine as many pigs as they want indoors. Farming is a profit-seeking business; therefore, companies seek to do the minimum amount required to save time and money.

The United States Department of Agriculture does not specify the exact amount of time animals should be outside or the amount of space they should be given. “Free-range” typically means sheds and warehouses without access to the outdoors for cows used for dairy and pigs used for pork (humanefacts.org). Chickens and turkeys might be allowed to go outside, usually through the use of a doggy door, which is only open for a brief time. Many of the chickens and turkeys aren’t physically able to make it out of the door if they’re even aware of its location.

Organic, free-range or pasture-raised animals face the same cruel practices factory-farmed animals do. They endure reproductive manipulation such as forced insemination and castration without painkillers (peta.org). Calves and their mothers are still separated. According to the USDA, 97 percent of dairy calves are permanently removed from their mothers within the first 12 hours after birth.

Some humane label farms will remove the calves from their mothers within the very first hour to help “alleviate stress” (humanefacts.org). Chickens are debeaked, which is an extremely painful process during which part of their sensitive beaks are cut off. Piglets have their teeth clipped in half and their tails cut off with pliers or a knife, again without the use of painkillers. Goats, sheep and cattle suffer through dehorning.

According to the American Veterinary Medical Association, dehorning is done to heighten safety for surrounding animals and farm workers, and dehorned animals sell for more money at auction. The AVMA then states, “Physiologic, neuroendocrine and behavioral changes indicative of pain and distress are observed following dehorning.” The most crucial factor concerning this practice is that these animals have horns for a reason. They are used for cooling and thermoregulation, and when the horns are painfully taken away, that process is severely negatively impacted (vegansouls.com).

For a company, such as a diary farm, to keep their status as organic, they must not use antibiotics. This can be considered positive for humans in the United States. 80 percent of antibiotics sold in the U.S. are used for livestock, which has led to an increase in “super bacteria” due to antibiotic resistance forming from antibiotic overuse (ghc.org). However, eliminating the use of antibiotics for farmed animals leads to serious health issues, as they are often not properly treated when they’re sick or have an infection, both of which often happen due to their living conditions (peta.org).

There are many protein and nutrition sources outside of meat and dairy, such as spinach, hemp, non-dairy milk, nut butter, quinoa, tofu, tempeh, lentils and beans. The world is moving toward a vegan future due to the vast amount of issues within animal agriculture. Meat consumption in the United States dropped 15 percent in 2015, while vegan products are expected to make up a third of the protein market by 2054 (mercyforanimals.org).

The development of plant-based meats and cheeses are gaining in popularity and are becoming easier to find. Brands such as Beyond Meat, Hungry Planet and Field Roast have developed vegan meat substitutes that are packed with protein and are available at groceries around the world. Vegan butcher shops, such as The Herbivorous Butcher, are creating artisan meat-free steaks, ribs, sausages, burgers and more. Ike’s Place, the super popular and award-winning sandwich shop, has a location in Isla Vista that serves up fresh sandwiches loaded with plant-based meats and cheeses.

Humans do not need to consume animal products for nutrition and are completely capable of living healthy lives on plant-based diets (pcrm.org). If humans can survive without consuming animals, then why do we continue to inflict pain and suffering on them? Even with farms that do not employ the cruel practices mentioned above, the animals are still slaughtered. An animal’s life is taken against its will, which doesn’t align with what humane practices stand for: compassion, benevolence and kindness. Therefore, there is no such thing as “humane” meat or dairy. Stand up against cruelty by going vegan and adopting a plant-based diet.

Ketia Johnson hopes you consider the true definition of positive-sounding labels the next time you shop.

‘The use of “or” in their label allows them to confine as many pigs as they want indoors’. That’s a not a fact, by USDA standards and the Niman brand.