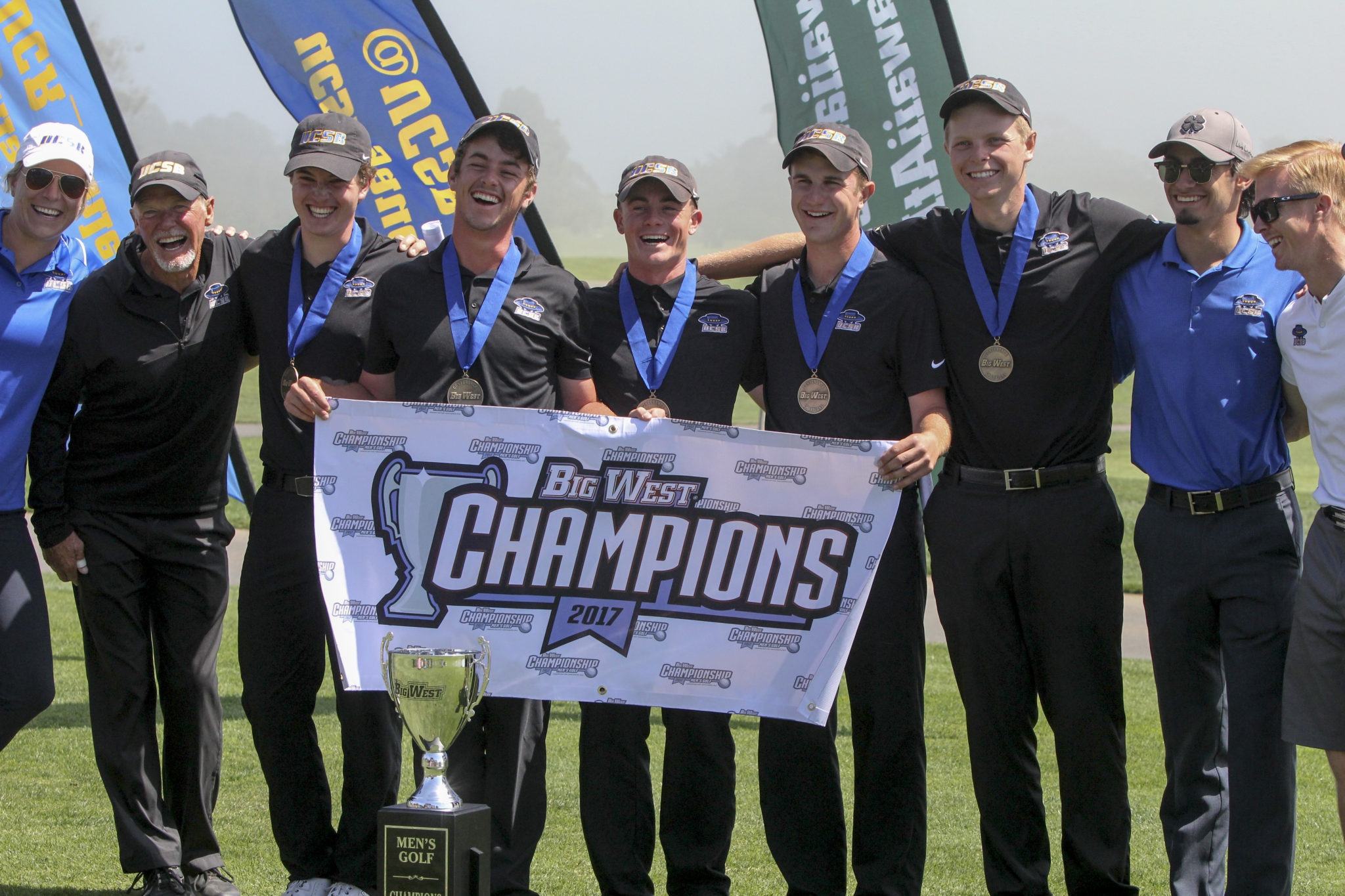 It wasn’t pretty, but the UCSB golf team did just enough on Wednesday’s final round of the Big West Tournament to win by one shot by the end of the day and bring the conference championship back to Santa Barbara for the first time since 1998.

“It was just awesome, long time since we have won the conference so this victory is great,” Head Coach Steve Lass said. “The crowd support, public support, and really community support were really cool and to win in front of this community was even better.”

The Gauchos came into the last round holding a six-stroke lead, but as the day progressed, a red-hot CSUN, which fought back fiercely behind the wonderful performance of junior Felix Mory, kept cutting into that lead. By the final hole, Santa Barbara held a slim, one-stroke advantage.

Despite the pressure, sophomore Nick Swanson made sure to keep that lead, finishing the par-3 hole well, capping off a great season and bringing home a championship to Santa Barbara for the first time in nearly 20 years. Although as a team they only carded 3-over par 291 on the final day, the Gauchos’ overall 12-under 852 proved enough to secure the win.

After the conference championship, UCSB is now the proud holder of five tournament victories this year, something they feel definitely made a difference when during this championship they held onto the lead and did not allow victory to slip away.

“I think winning those other four [tournaments] definitely played a big factor being able to be in that position before,” Swanson said. “This wasn’t a new feeling for us, but all our other wins were more runaways and this one came down to the end so experience paid off.”

By winning the Big West, the team has also secured a spot in the NCAA Regionals. The Gauchos won’t know whom they are playing or where they will play until later today, but they are certainly excited about the opportunity to play in the final competition of the season.

“I don’t care where we go, I’m just excited to play wherever they send us,” Swanson said. “It’s a great feeling to finally have that final satisfaction of a conference championship and moving on.”

Gauchos raising their first @BigWestGolf cup since 1998! Congrats to @UCSBMensGolf! Wonderful team, everyone is a class act, well deserved pic.twitter.com/Tepn3yyOYM

CSUN finished the evening in second place after a solid 4-under par 284 final round, finishing off its tournament run at 11-under 853. Mory came into the final round as the top individual player at Sandpiper thus far and he finished it that way, carding 10-under 206 for the whole tournament to take the title.

Swanson finished the day carding 1-over par 73, but still had a great tournament overall, finishing as the highest-ranking Gaucho in the individual at third place with a 5-under par 211, just one shot behind Long Beach State’s Joe Fryer, who finished 6-under par 210.

Junior Zack Smith finished in fourth place, carding 4-under par 212 for the tournament while defending champ junior Brandon Bauman dropped 11 slots by the end of after a very tough 5-over par 77 performance. He would finish tied for 15th at even-par 216. The junior was certainly proud of a team win and knew he could count on his guys to bring home the trophy despite his below-average performance.

“Honestly, we have a team where all five guys could have won this tournament,” Bauman said. “Today I struggled, but I was confident my team would get it done and it’s an awesome feeling to know that if you’re having an off day, you got four guys that could play golf really well.”

Willy Moffly finished tied for 24th after carding 4-over par 220 for the tournament. The junior played a pivotal role down the stretch as the lead was diminishing and came up huge for the ‘Chos, carding at least even-par in his final eight holes.

The youngest of the group, freshman Brett Bennett, also stayed strong during the final round and came out of this tournament with a 17th-place finish at 1-over par 217. Despite being the youngest on the squad, it is not lost on him how important this win was not only for him but also for the program. 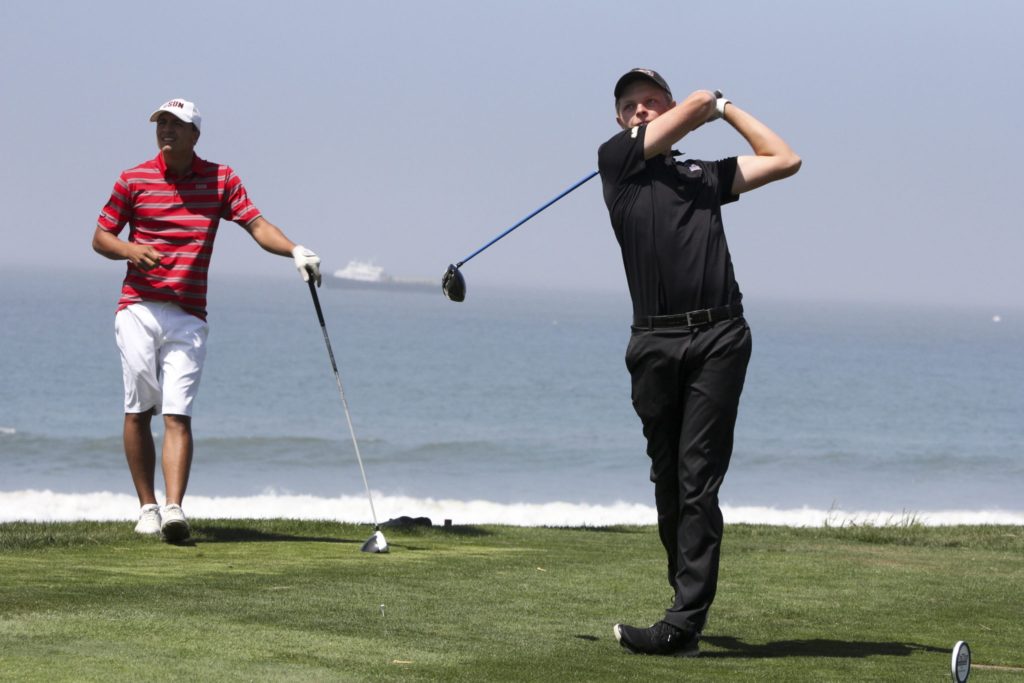 “I think this is cool, all these guys have taken me in and made it super easy for me to transition from high school to college,” Bennett said. “In my first year to go to regionals and keep playing golf with this team has me really excited.”

Overall, it was a huge day for the Gauchos. Almost blowing a six-stroke lead is not the same as actually doing it, and being able to celebrate a conference championship — one that has been long overdue — makes it all worth it.

UCSB’s next task will not be in the comfort of their own course here in Santa Barbara, but as a team that has now won its last three tournaments, the Gauchos have all the confidence in the world to take on whichever teams at whichever course the NCAA Regionals has in store for them.

“We all started playing golf really well, right now at the end of the year,” Bauman said. “We have put our school back on the map and it was because of all these guys and now we are in the midst of possibly the best run in recent school history.”

The NCAA men’s golf selection show can be viewed today at 9 a.m. on the golf channel. You can also follow @thenexus_sports to get all the latest updates on whom and where the Gauchos will play next.