The writer and activist has been awarded as The Root’s 100 Most influential African Americans and featured in the “Politico 50,” a guide of thinkers, doers and visionaries transforming American politics. 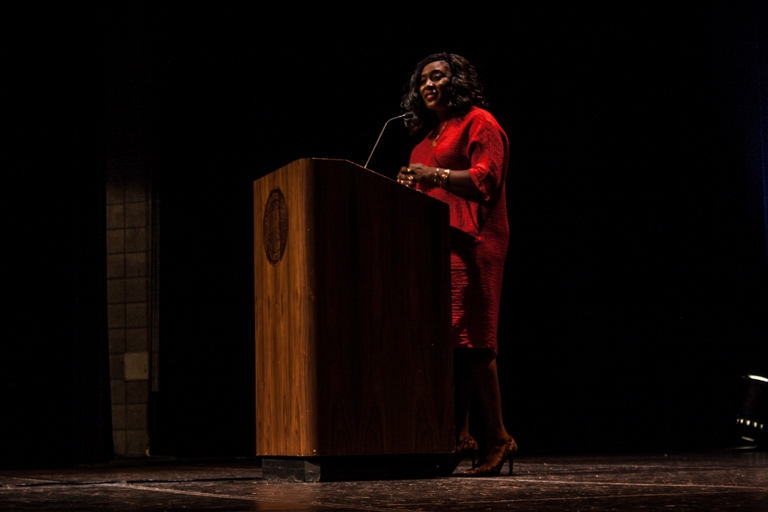 Garza, a UC San Diego alum, last came to UCSB nearly 10 years ago when she worked for the University of California Student Association.

Setting the tone for an intersectional conversation about social justice, Garza welcomed the full auditorium by asking the audience to acknowledge that they were standing on land once occupied by Chumash indigenous people.

She then expressed her support for the list of demands from the Black Student Union, Black Student Engagement program and Black Resource Committee, which includes ensuring that black students make up more than 5 percent of the university’s student population.

She also supported the idea to hire two full-time black psychologists on campus and spoke of the psychological effects of controversial speakers invited to the university.

“Emotional wellness is important for everybody, not just black students,” she said, “but certainly in a campus environment, where I hear there was just a speaker here talking about the lies and division of Black Lives Matter.”

Ben Shapiro spoke at Campbell Hall in February for his event titled “Lies, Prejudice, and Division: The Legacy of the #BLM Movement,” which was later named “The Regressive Left, ‘Social Justice’ and #BlackLivesMatter.”

Garza said narratives of history impact our present and future. She said “this country is powered by the engine of amnesia” because historical aspects are often “conveniently” left out in conversation about BLM.

Garza went on to say that the nation has a history of racially prejudiced “laws, policies and practices,” which she said are “deliberately designed to rob some of power in favor of giving others power.”

She noted that of the “two million people locked up … one million of those people” are African American. She said they are not incarcerated because they are “inherently criminal.”

“This is not liberal or conservative, Democrat or Republican; this is just what is,” she said. “It’s because there are laws that disproportionately target black people for things that all people do, but not all people get put in cages for their lives.”

This July will mark the four-year anniversary of BLM, and Garza said she wanted to make it clear that it is not just a movement for black lives, “but a movement to save all of our lives.”

She said there are misunderstandings of the movement that distract from its message.

“Black Lives Matter started as a love note to black people, but it is a demand and a call to action,” Garza said. 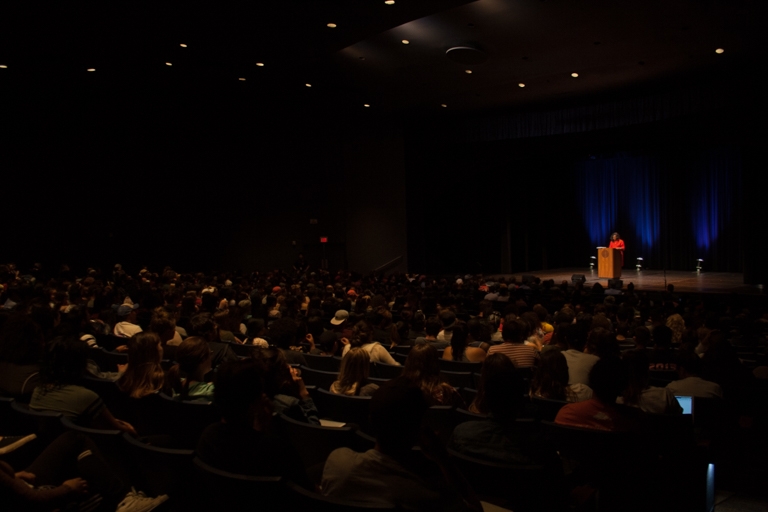 Garza said this movement began in generations prior to hers and is now a continuation of a long legacy of struggle in the United States.

Garza also outlined three “myths” of BLM: the notions that it is anti-police, anti-white and black supremacy.

Garza said the movement is not anti-police, but, rather, it is against the perpetuation of cycles of violence. She said she believes the cycle will end when someone is courageous enough to say that the institutions and systems in place “are not working.”

Garza also said the allegation that BLM is a black supremacy group “just doesn’t make sense.” The activist group does not want to perpetuate the same systems that oppress people but, rather, to transform the powers that operate those systems, Garza said.

Christine Dolan, associate director at the Resource Center for Sexual & Gender Diversity and one of the organizers for the event, said BLM week is about “coalition building.”

Dolan said they believe the event was an effective way to bring people together and “center the Black Lives Matter movement on campus.”

Fabiola Pérez, a fourth-year biological anthropology major, said she thought Garza made “all these issues human” and spoke about them in realistic terms.

“I feel like a lot of the stuff we see is so out there and it feels so far away, when in reality it’s very immediate and very close,” Pérez said.

Garza said she wanted the audience to leave thinking about “the ways we want to create movement and the ways we establish power.”

“White folks need this movement,” she said. “They’re being fed a lie, too.”